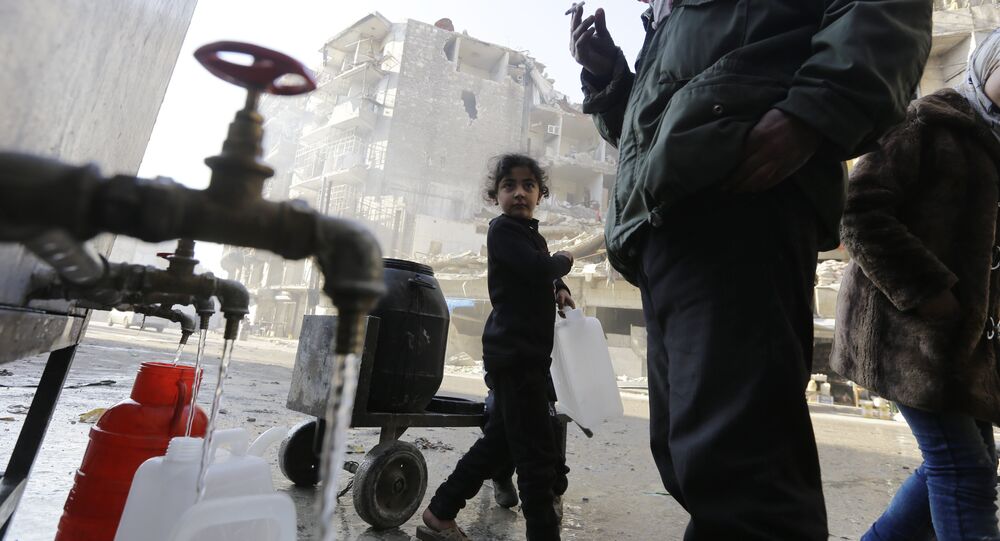 UN Children’s Fund (UNICEF) spokesperson Christophe Boulierac said that it would take at least ten days before water could be pumped regularly to all neighborhoods in Syria's Aleppo.

"Thanks to recent repairs to the municipal system, water provision was resuming slowly," Boulierac stated. "It would take at least ten days before water could be pumped regularly to all neighborhoods."

Boulierac noted that for almost a month, the wider Aleppo’s 1.8 million residents, 700,000 of which are children, were deliberately cut off from the public water network.

The spokesperson noted that water is a fundamental human right and especially children should have secure access to safe drinking water.

Children are one of the most vulnerable groups to water-borne diseases and often are given the task to collect water for families thus affecting their school attendance, according to UNICEF.

© REUTERS / Omar Sanadiki
Russia Delivers 3.8 Tonnes of Bread to Aleppo Residents in 24 Hours
At present, UNICEF is working on repairing the ground water wells in and around Aleppo and on providing daily emergency supplies of 10 million liters of water to most vulnerable residents. The agency also distributes water purification supplies and provides fuel to operate wells and water pumping stations.

The central water supply in Aleppo has been cut off since January 14 as a result of a technical failure of the city’s pumping station. The station is located in a rural area east of Aleppo controlled by the Islamic State terror group.

Over the past month, Islamic State militants did not allow maintenance crews to repair the pumping station.

The United Nations, together with Aleppo’s utility services, have been providing water safe for drinking to the city’s residents through tankers and by utilizing wells.

Russia Delivers 3.8 Tonnes of Bread to Aleppo Residents in 24 Hours

'We Did Not See Any Western Humanitarian Organizations' in Eastern Aleppo