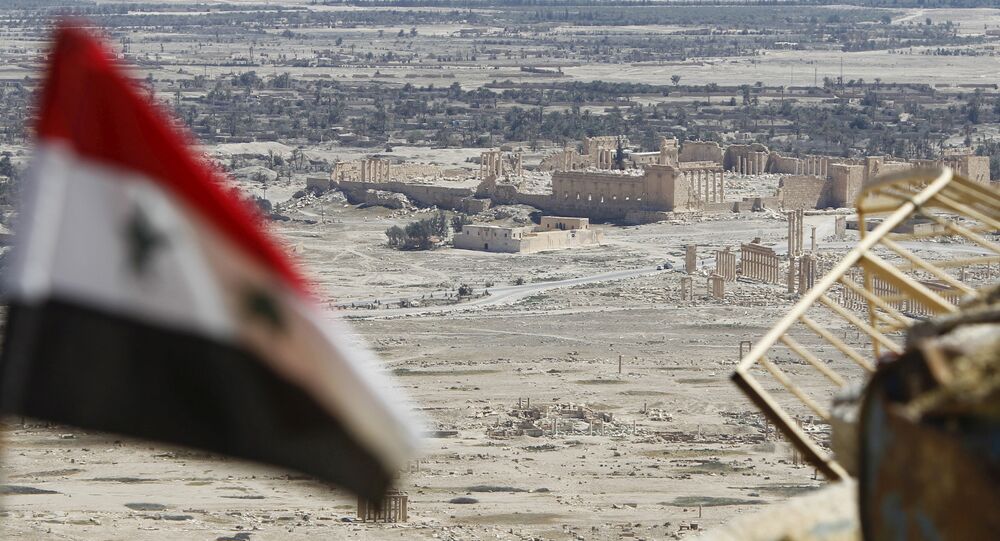 Daesh is destroying Palmyra's historic monuments in response to the success of the Syrian government army, the country's culture minister told Sputnik.

"This is a terrible crime regarding the world heritage monuments. I am calling for the international community to implement its obligations regarding this barbaric act, which hit the historic city," Ahmad said.

© AFP 2021 / STRINGER
The Retaking of Palmyra From Daesh Will be 'Swift and Rapid'
Earlier this week, the Russian Defense Ministry published a video that showed some of the most precious relics of Palmyra city devastated by the Islamic State group, outlawed in Russia. According to the ministry, the video proves that Islamists had blown up proscenium, the central part of the Roman-era amphitheater, and columns of the 16-column Tetrapylon, which dates back to 270 A.D.

According to Ahmad, the militants are destroying the historic monuments in response to the success of the Syrian government army.

© Sputnik / Mikhail Voskresenskiy
Palmyra in Sight: Less Than 20Km Separate Russia-Backed Syrian Army and Ancient City
Less than a year after that the Syrian army supported by the Russian Aerospace Forces managed to liberate Palmyra. Russian specialists demined the historic center as well as residential areas of the city. Russian historians and renovators visited Palmyra in early July 2016 and prepared a report assessing the condition of the damaged sites and costs of the renovation works. However, in December 2016, the city was retaken by jihadists.