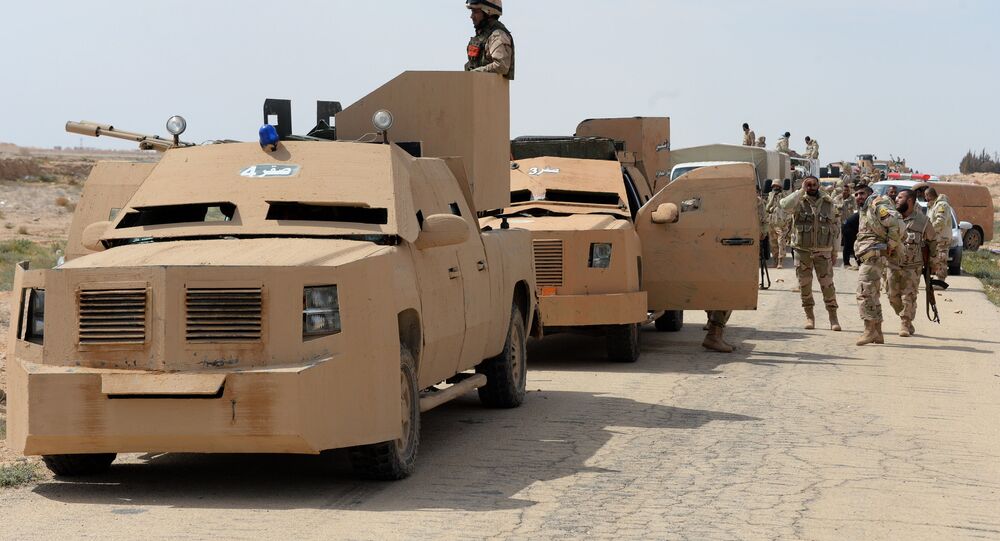 Syrian government troops and allied militias have liberated a gas field near the Daesh-held city of Palmyra.

BEIRUT (Sputnik) – The Syrian army, supported by the air force and militias, liberated the Hiyan gas field close to Syria's Palmyra in the province of Homs, a militia source told Sputnik.

"The Syrian army supported by the Syrian militia and air force established full control over the Hiyan gas field west of Palmyra," the source close to the Desert Falcons militia said.

© AP Photo /
Daesh Launches First Ever Tank Attack on Iraqi Militia, and Gets Successfully Crushed
Tens of militants were killed and a number of armored combat vehicles were destroyed as a result of the offensive, the source added. Several groups of terrorists withdrew toward Palmyra.

According to another source familiar with the details of the operation, the engineering units of the Syrian army have started to clear the territory of mines and explosives left by Daesh militants. The source noted that Daesh militants had completely destroyed the Hiyan gas processing plant and its pipeline a few days before the withdrawal in January.

© Sputnik / Mikhail Voskresenskiy
Palmyra in Sight: Less Than 20Km Separate Russia-Backed Syrian Army and Ancient City
Less than a year after that the Syrian army supported by the Russian Aerospace Forces managed to liberate Palmyra. Russian specialists demined the historic center as well as residential areas of the city. Russian historians and renovators visited Palmyra in early July 2016 and prepared a report assessing the condition of the damaged sites and costs of the renovation works. However, in December 2016, the city was retaken by jihadists.

On Monday, the Russian Defense Ministry published a video that showed some of the most precious relics of Syria’s ancient Palmyra devastated by the Daesh terror group, outlawed in Russia and a number of other countries.