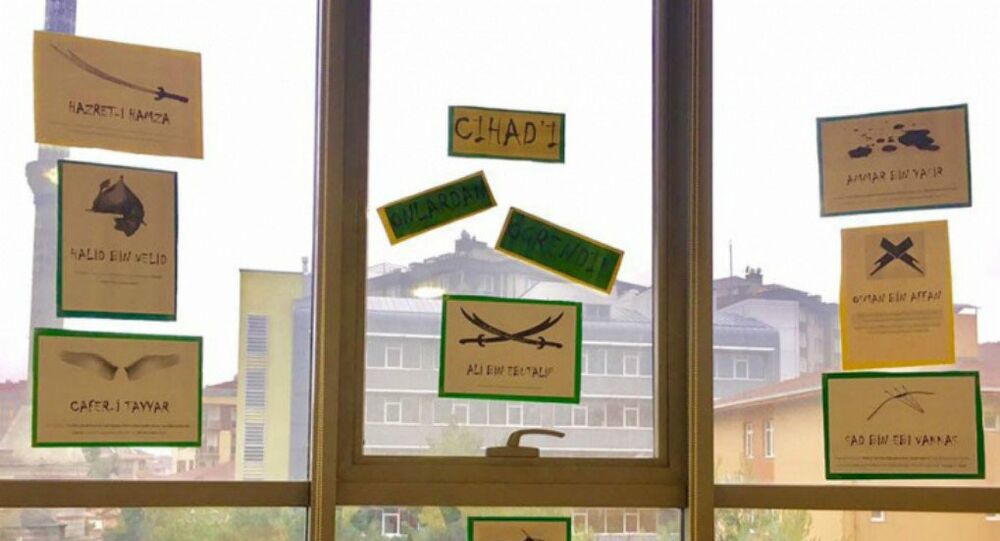 However, recent visitors to the center were shocked to see notices on the walls propagandizing jihad, with titles such as, "what we know about jihad."

Messages calling children to participate in jihad have been posted on the center's Facebook page, and a recent article entitled "Values for February: Jihad," gives information about the origins and development of jihadism.

Istanbul politician Baris Yarkadas, a deputy for the opposition Republican People's Party (CHP), has made the shocking photos public in the Sancaktepe municipality and online.

'The walls and Facebook page of the AKPli Sancaktepe Municipality Information House were adorned with the call  to 'jihad.'"

​​The deputy, who was elected to parliament in 2015, has brought up the issue in the Turkish parliament, and called for a response from Prime Minister Binali Yildirim.

Yarkadas told Evrensel that the advertisements are a criminal act that must be punished.

​"Placing posters and articles entitled 'what we know about jihad' in that institution is nothing other than brainwashing the younger generation," he said.

"All the local officials who allowed this to happen, including the head of the municipal council, must be held accountable. Let them explain against whom or what they are calling for children to carry out jihad. This is plainly criminal."

© Sputnik / Ruslan Krivobok
Seismic Powder Keg: Massive Earthquake Threat Looms Over Istanbul
Yarkadas is a member of the Kemalist CHP, the oldest political party in Turkey. He sought to connect increasing jihadi violence in Turkish cities with the influence of the Justice and Development Party (AKP), which has ruled the country under President Recep Tayyip Erdogan since 2002. The CHP draws on the secular traditions established by Turkey's founder, Mustafa Kemal Ataturk.

"During free 'courses,' organized at 'Information Centers,' by representatives of the (AKP), tender young minds are being processed with the rhetoric of hatred and violence. It is exactly these actions which feed Daesh (ISIL/ISIS) and ensure the recruitment of new members to the organization."

"These are people who, instead of telling children about friendship, peace, brotherhood and love, describe the delights of jihad to them and put the future of Turkey under threat," Yarkadas said.

At Least One Dead, Two Wounded in Shooting at Istanbul Restaurant