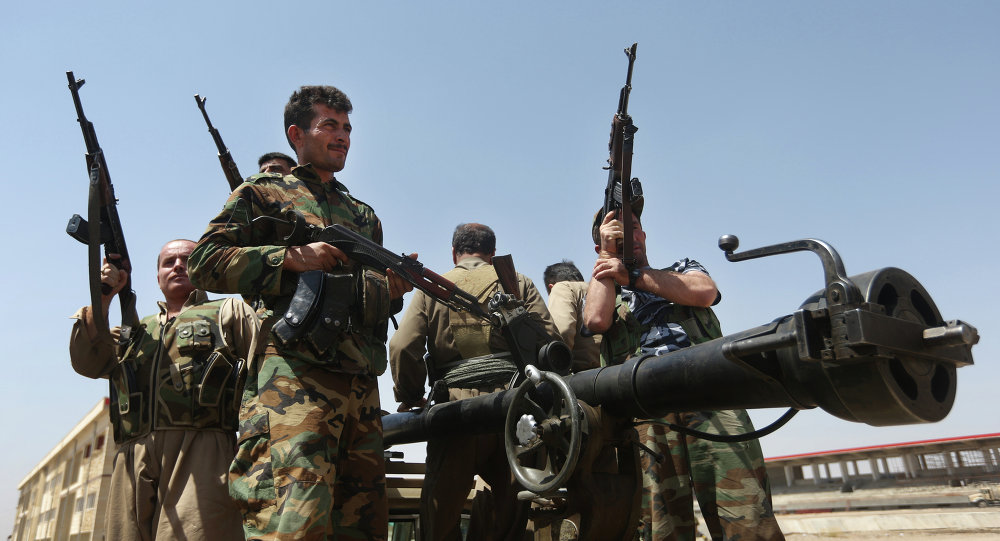 A fighter of Peshmerga, military forces of the autonomous region of Iraqi Kurdistan, was wounded by three shots during the Daesh offensive on Kirkuk, and already lost all hope to survive when he was found by the Iraqi Kurdistan representative to Russia and brought to Moscow for medical treatment, he told Sputnik in an interview.

MOSCOW (Sputnik), Anastasia Levchenko — Hersh Mahmood Khudhur, 36, now feels embarrassed to smile, and wears a scarf to hide part of his face. Three months ago, after he and other Kurdish fighters embarked on a mission to protect Kirkuk from Daesh terrorists, what is now covered with scars was hard to call a face.

"At around 4 am some hundred of Daesh suiciders penetrated the city. We advanced immediately. Gunfire started, and I caught three shots from a Daesh militant. The first one hit my gun. The second got in my shoulder. I tried to bend to save my head, and the third shot hit the cheek and the chin. It could easily be in the forehead if I did not move… I saw the man who was firing at me. I can still remember him," Khudhur said.

Not yet realizing that he was wounded and not feeling pain in a state of shock, Hersh Mahmood crawled to the ambulance lorry and was brought to a field hospital in Kirkuk. However, there was not enough medication and the patient was not even given a painkiller.

"I heard the doctor telling someone that I would not live. That if no one could help me there, no one would help me anywhere. At that moment I realized it was the end, I understood that I was dying," Khudhur continued.

His friends, however, did not lose hope that fast. They reached out to Representative of Iraqi Kurdistan to Russia Aso Jangi Talabani, who organized Hersh’s transfer to a hospital in Sulaymaniyah, another city in Iraqi Kurdistan, and then arranged medical treatment for him in Moscow. Being a doctor himself, Aso Talabani knew the fighter would find doctors he needed in Moscow.

© Sputnik / Iliya Pitalev
Freedom for Syrian Army Officer in Exchange for Terrorist’s Wife
Hersh Mahmood got a Russian visa in just one day due to the help of Russia’s Consul General in Erbil Viktor Simakov, and came to Moscow to find a surgeon who would make part of his face movable again.

"It’s my first time in Russia, but I feel here at home. It’s a very beautiful city. And the mission of Iraqi Kurdistan here gives every support," Khudhur said.

His surgery in Moscow is sponsored by Lahur Talabani, brother of Aso Talabani and head of Iraqi Kurdistan's Zanyari intelligence service and a founding member of the Counter-Terrorism Group.

Russia’s consulate in Erbil and the mission of the Iraqi Kurdistan Regional Government in Russia have an informal agreement since 2014, since the very start of Daesh activities in Iraq, on providing medical assistance to injured Peshmerga fighters in Russia.

"Aso Talabani, his brothers Polad and Lahur, who are always next to the fighters both at the front and in hospitals, give us really much. They give hope to the wounded," Khudhur added.

The mission of Kurdish fighters who counter Daesh terrorists is hard not only in technical, but also in ideological terms, Khudhur explained.

"Weapons that we have are really old. These are Kalashnikovs from the Soviet times. … Another difficulty is that Daesh uses children and women as human shield. When you see a child or a woman coming out, you simply cannot fire at them," Khudhur said.

Peshmerga women fighters are a kind of "response" to inhumane treatment of women and children by Daesh.

"Daesh militants believe that if they die by a woman’s hand, they will not get to paradise. That is why our women are very effective. They play a great role," Khudhur said.

© REUTERS / Ahmed Jadallah
Meet the Brave Yazidi Amazons Who are Sending Daesh to Hell
12
Asked whether he would like to come back into the ranks of his fellows in Peshmerga, Hersh Mahmood answered without hesitation.

"I do. This is what I told Aso Talabani from the very beginning, when he offered help. I know that if I died, my father would send other of his sons to fight against terrorists," Khudhur said.

Since the beginning of the war against Daesh in 2014, around 1,500 Peshmerga fighters have been killed and about 9,000 injured, according to the Kurdish authorities’ statistics as of June 2016.