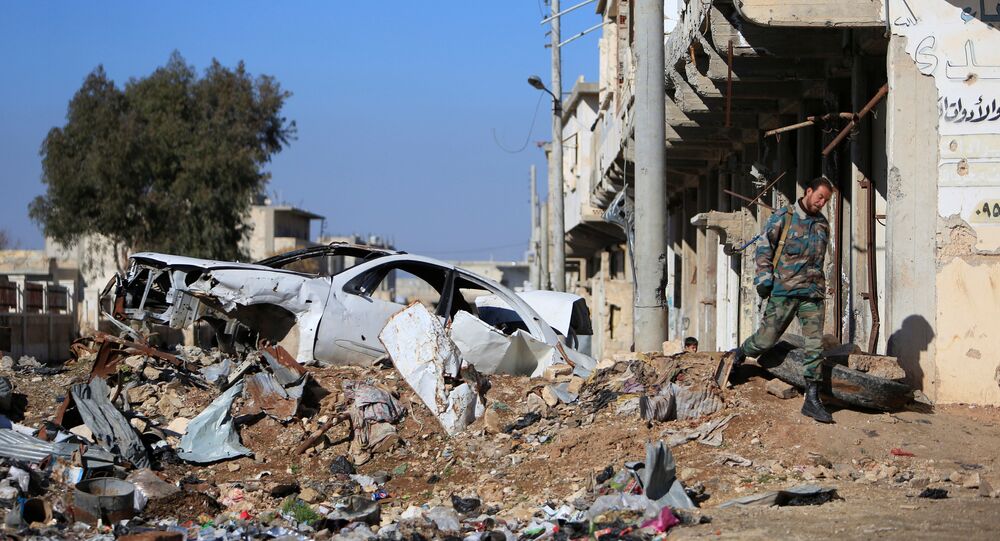 Fighting between Syrian government forces and Daesh jihadists is now mostly concentrated in the north of Syria: the terrorists have besieged the city of Deir ez-Zor and have tried to block the major supply route to Aleppo. Russian military analysts explain that they are simply trying to delay their total defeat, which is just a matter of time.

© REUTERS / Ali Hashisho
Russia's Proposed Draft Constitution for Syria a Serious Step Towards Peace
On January 26, Daesh (ISIS, Islamic State) launched a large-scale attack on the government supply line to the city of Aleppo – the Khanaser-Aleppo highway, aiming to cut off supplies to the government-held city.

The Syrian army and the National Defense Forces (NDF), backed up by Russian warplanes, repelled the attack, but the incident clearly showed that this vital supply line was still vulnerable to attacks by the terrorists.

On Friday, Syrian cargo aircraft successfully dropped off ammunition to the servicemen at the military airfield at the city of Deir ez-Zor, currently besieged by Daesh. The Deir ez-Zor military airbase is the government-held position in the city where several residential areas are still under government control.

However much of the oil-rich province, which bears the same name, is still under control of the jihadists.

Commenting on the latest military developments in the country, Russian military analysts note that the militants are well aware of the lack of the military in the government forces and are trying to find weak points in the defense of the Syrian army while trying to avoid their utmost defeat, which is only a matter of time.

© AP Photo / Anatolia, Kenan Gurbuz
Turkey Kills 20 Daesh Terrorists During Aerial Bombardment in Northern Syria
Ivan Konovalov, head of the sector of military policy and economy of the Russian Institute for Strategic Studies spoke to Russia's Izvestiya newspaper on the jihadists' tactics, saying that they are desperate to find a way to avoid military defeat.

"There are fairly good strategists among the jihadists, who understand only too well that they are going to be ruined politically very soon, as, due to Russia's efforts, there will soon be a unified front against them," he told the newspaper.

The analyst also said that regardless of the impending outcome, the terrorists are still trying to seize the initiative by attacking in a number of directions.

"They need to increase the territory under their control as much as they can, hence we see attacks on Palmyra, Deir ez-Zor, fierce battles near Al Bab and Aleppo. They are applying the tactics of war of maneuver, hitting the communication lines, using the element of surprise," he said.

Konovalov is however convinced that it will only postpone their imminent defeat.

"The terrorists won't be able to turn the tide of the war if Russia continues its support of the Syrian army and the Kurds don't start a war with the Turks," he said, adding that the Syrian government forces and the Kurds remain the most dangerous threat to the jihadists.

© Sputnik / Michael Alaeddin
Over 12,000 Civilians Returned to Houses in Eastern Aleppo
Meanwhile the Turkish General Staff reported on Monday that it continued its airstrikes in the north of the country, killing 20 Daesh jihadist group members over the past 24 hours.

"Turkish Air Forces destroyed 20 buildings used by Daesh terrorists as hideouts, as well as one arsenal and two defensive positions in the Syrian towns of Al Bab, Tadif and Bzagah… In over 24 hours, 20 Daesh terrorists have been eliminated," the General Staff was quoted as saying by the news outlet Haberturk.

Turkish forces, along with Syrian opposition forces, occupied the city of Jarabulus in northern Syria and are currently carrying out an offensive against the strategic city of Al Bab.

Commenting on the attacks of the Russian aviation, Russian political and military analyst Alexander Perendzhiev, an associate professor in the Faculty of Political Sciences and Sociology, told Sputnik that they will allow the recapture of the country's north from the jihadists and further restoration of the economy in the most industrially developed Syrian province of Aleppo.

He also noted that the liberation of the Aleppo province from terrorists remains the major strategic goal which will enable the Syrian government forces to set up control over the north of the country and the Syrian-Turkish border.

"Much of the supply of the terrorists is still going on through this border, as well as illegal trafficking of oil and other supplies," he told Sputnik.