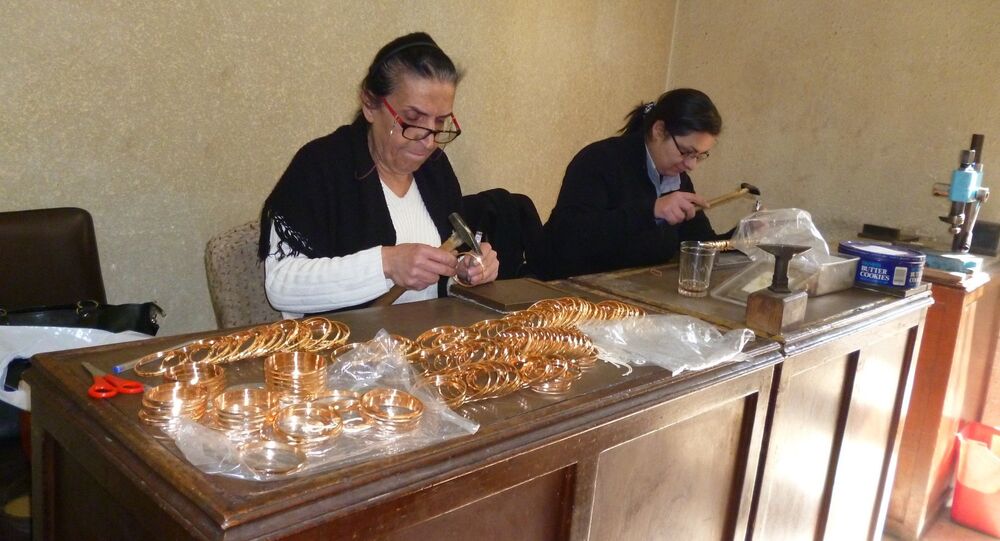 Syrian gold jewelry is made with a level of craftsmanship that draws upon millennia of experience, which is why it has won admirers around the world, Gassan Jazmati, head of the Syrian Association of Jewelers, told Sputnik Arabic.

© AFP 2021 / XAUME OLLEROS
Fashion Meets High-Tech: Chinese Maker Creates World’s First Smart Jewelry
In an interview with Sputnik Arabic, Gassan Jazmati, head of the Syrian Association of Jewelers, heaped praise on Syrian gold jewelry, which he said is made with a high degree of precision and skill that have been inherited from times immemorial.

According to him, "there is great demand for Syrian gold jewelry in foreign countries, including Egypt, Iran and Algeria; resellers earn good money because the work of our local jewelers is cheap."

"Syrian goldware is recognizable because only our goldsmiths leave their own personal mark and a sign of our association on each piece, which confirms the authenticity of the gold.  We use 21-carat gold to produce the braid-shaped bracelets and chains, while 18-carat gold is used to make thin chains, necklaces and rings. Turkish goldsmiths have tried to borrow our system, but to no avail, Jazmati said.

© AP Photo / Bassem Tellawi
In this Oct. 29, 2007 file photo, Asma Assad, the wife of Syrian President Bashar Assad, attends an exhibition, titled "a sea of jewels", at the National Museum in Damascus

He added that a Syrian goldsmith will never make forgeries, given that each and every gold piece bears his personal mark and that he understandably seeks to avoid tarnishing his image.

In addition, the gold can be tested in a special laboratory in Damascus, and each gold jewelry piece has a quality certificate, according to Jazmati.

The Central Bank of Syria has managed to stabilize the price of gold, prompting people to buy gold instead of dollars, which are often counterfeited.

A single price for gold is daily established at 11.30 all across Syria. It depends on the world price per ounce and the local exchange rate of the dollar. Jazmati said that Syria has yet to establish cooperation with other countries on this issue.

One Ring to Save Them All! Kickstarter Backs Jewelry With Panic Button