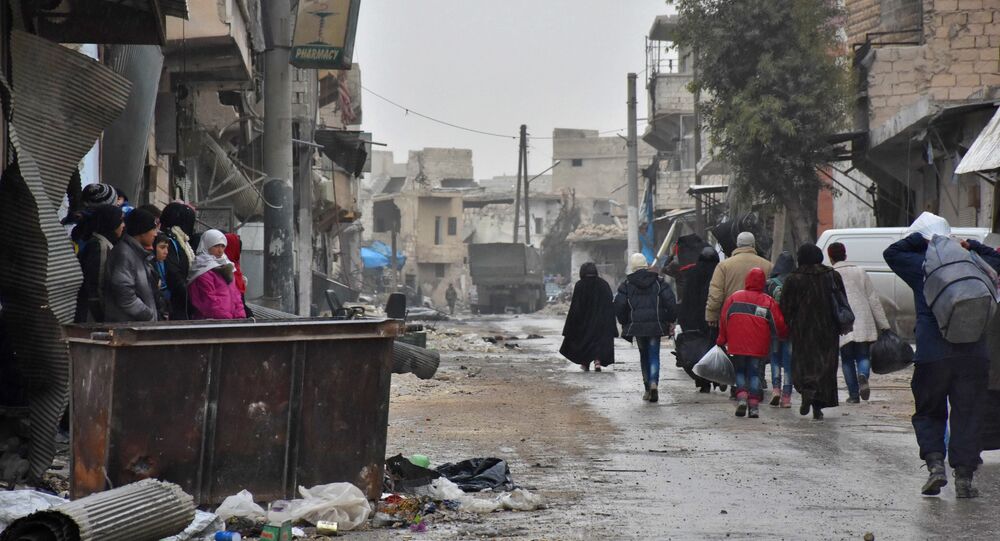 At least 1,500 human trafficking cases have been registered in Syria in the past year, according to the country's Interior Ministry.

© REUTERS / Ali Hashisho
Cash-Strapped Daesh Reportedly Trafficking Kids, Human Organs via Turkish Firm
Last year saw about 1,500 cases of human trafficking in Syria, with most such operations conducted by agents of foreign criminal networks or the Syrians they hired for the purpose, the country's Interior Ministry reported.

In an interview with Sputnik, Syrian Deputy Interior Minister Hassan Maaruf stated that thousands of these crimes have taken place in Syria over the last three years; 65 percent of victims of human trafficking are reportedly women.

"Syria has turned into one of the countries delivering 'slaves'; before, Syria had only been used as a trans-shipment point for human trafficking," he said, calling for international cooperation to resolve the problem.

Nizar al Sakif, head of the Syrian Association of Lawyers, told Sputnik that human trafficking is flourishing in northern Syria, mainly in the city of Aleppo.

According to him, the Union of Arab Lawyers is currently collecting the relevant documents for the International Court of Justice on the issue of slavery in Syria.

© AFP 2021 / DELIL SOULEIMAN
US Relief Foundations Unwittingly Aiding Syrian Kurds Engage in Human Trafficking
Human trafficking is reportedly among one of the 15 sources of funding for Daesh (ISIL/ISIS) terrorists in Syria and Iraq.

A criminal group involved in human trafficking was recently detained in the Syrian capital Damascus.

Under Syrian law, human trafficking is punishable with lengthy prison sentences and a hefty fine.