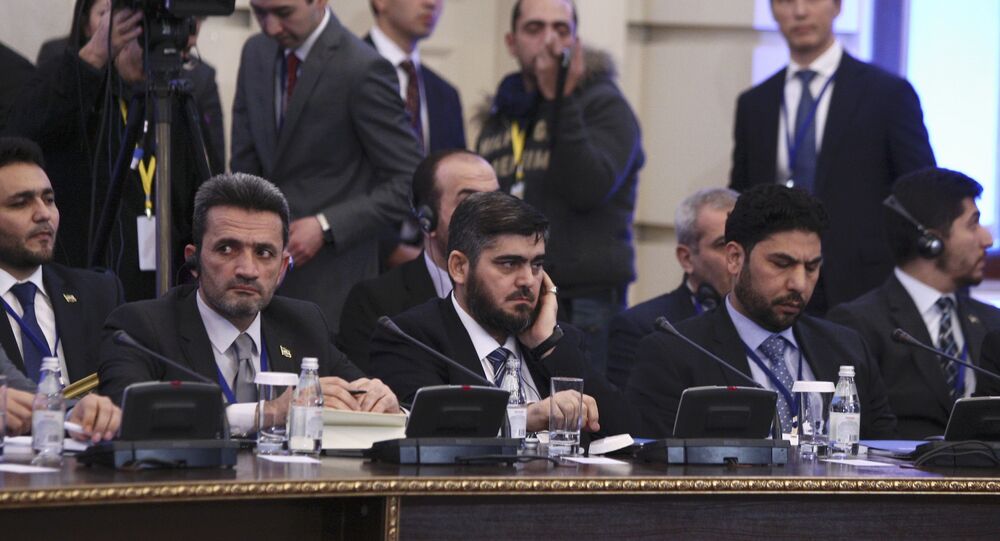 © REUTERS / Bassam Khabieh
Syrian Government, Armed Opposition Agree to Join Forces Against Terror
MOSCOW (Sputnik) — Representatives of the Syrian armed groups at Astana talks decided not to look into the proposals on constitutional change that were presented to them by the Russian delegation, insisting on the need to establish a lasting ceasefire prior to discussing political transition, adviser to the opposition delegation in Astana Yahya Aridi told Sputnik Thursday.

"We were presented a paper [on constitutional change] that we already knew before. … We did not look deeply into it to see how much they [new draft and the previous proposals] coincide. Because we took a decision, on purpose, not to look into it at this moment. Because we consider concentration on constitution to be diverting attention from what Astana was for. It was for the ceasefire,” Aridi said.

Just after the conclusion of Astana talks, media reported citing unnamed opposition sources that the Russian proposals included removal of the word “Arab” from the official name of the country, establishment of the Kurdish autonomy and equal rights of the Kurdish and Arabic languages, and extension of rights of the regional assemblies.

© AFP 2020 / LOUAI BESHARA
Syrian Armed Opposition Insists on Peace Settlement Via Assad's Resignation
As for the president’s role, the proposals reportedly put it as a mediator between the branches of power, and leave 7-year term, but limit it to not more than two subsequent terms.

The proposals also leave the president as the chief of army, according to the media leaks, but suggest that the decisions on war and peace be taken only with the approval of regional assemblies.

The Russian project reportedly suggests that the Syrian armed forces be under popular control and avoid interfering in the political life of the society and undertaking any role in handover of power.

“The project that we knew before, some 8 months ago, had these provisions that you mention,” Aridi said.

“We did not look deeply into it this time on purpose. It was just given to Mohammed Alloush [head of delegation]. … Because now we just want from the Russians one important thing — to use their leverage to establish the ceasefire in Syria. Discussion of constitution can be a late stage. After [the ceasefire] we will talk about real political transition," he added.

© AP Photo / Hassan Ammar
Russia Registers Five Ceasefire Violations in Syria in Past 24 Hours
The draft new Syrian constitution, prepared by Russian experts, was presented to the Syrian opposition by the Russian delegation during the Astana talks earlier this week. Head of the Russian delegation Alexander Lavrentyev underlined on Tuesday that Russia was not interfering in consideration of constitution and presented the draft to the opposition simply in order to accelerate the process.

The Astana talks on Syrian settlement were brokered by Russia, Turkey and Iran and took place in the Kazakh capital on January 23 and 24. They marked the first time since the beginning of Syrian civil war in 2011 when the government of Syria and the armed opposition sat together at the negotiations table.

Proposals on Syrian Constitution Worth Discussing With Opposition - Moscow