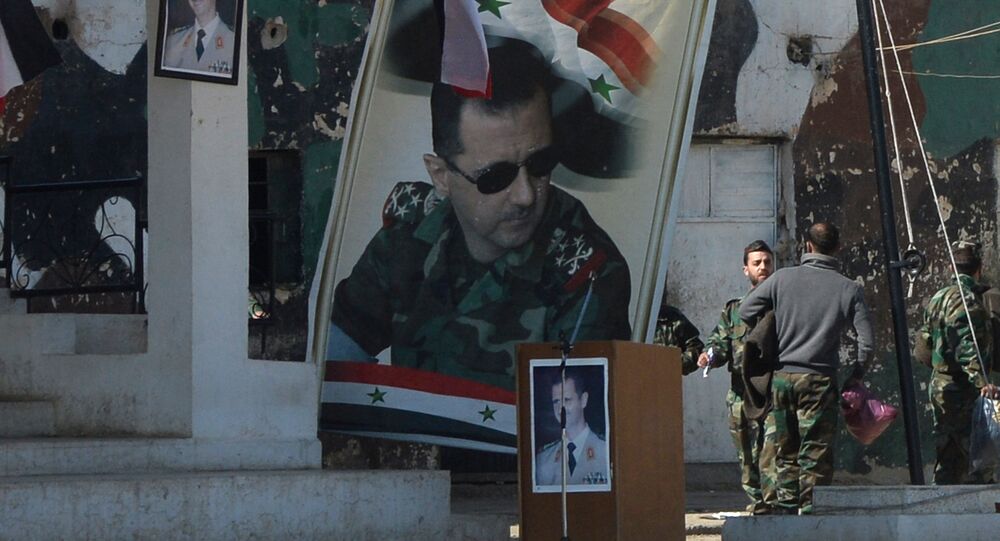 The Syrian government and representatives of over a dozen armed opposition groups will meet in Astana, Kazakhstan on Monday for peace talks brokered by Russia, Iran and Turkey. Speaking to Sputnik, Iranian political scientist Hossein Ruyvaran said that the negotiations were no place for powers that are dead set on toppling the Syrian government.

Preparations for peace negotiations in Astana between the Syrian government and over a dozen armed opposition groups are well underway, the hope being that the talks can help facilitate the end of Syria's six-year long foreign-sponsored civil conflict. The meeting will be followed by a UN-mediated meeting in Geneva on February 8.

Speaking to Japanese broadcaster TBS Television on Friday, President Bashar Assad emphasized that the Astana meeting was about "hopes" rather than concrete "expectations," the hope being that negotiations can lead to a broader ceasefire and allow militant groups to join the reconciliation process, which involves giving up armaments in exchange for amnesty.

© Sputnik / Mikhail Voskresenskiy
Preparation of Astana Talks on Syria 'Going Very Constructively'
Assad also stressed that the idea of early presidential elections would not be broached at the talks, since this is not provided for under the constitution.

On Thursday, State Department spokesman John Kirby confirmed that the United States received an invitation from Russia for the Astana meeting, but said that it would be up to the Trump administration to decide whether to accept it. Iranian Foreign Minister Javad Zarif voiced his opposition to the US presence, saying that Iran "didn't invite the US," and was "opposed to its presence."

Speaking to Sputnik Persian, Tehran University political science professor Hossein Ruyvaran explained that participation in the talks would be 'pointless' for any power or party that still believes that the only solution to the Syrian crisis would be to remove Assad from power.

Iran's position, according to the academic, "is that Astana talks really can become a turning point in resolving the Syrian crisis. After all, if a ceasefire is set up, and political dialogue on resolving the crisis becomes an alternative to fighting, this will be considered an effective and positive moment."

© Photo : Pixabay
US Confirms Receiving Invitation From Russia to Participate in Astana Talks
Picking up on Foreign Minister Zarif's remarks, Ruyvaran noted that a US presence at the talks would be inappropriate so long as Washington continues to hold the position that the only 'solution' to the Syrian crisis involves the removal of the legitimate president from power. The participation of a power that holds to such a position, according to the observer, "cannot effectively influence the process of resolving the crisis."

"After all, the central promise of negotiations is dialogue between the Syrian government and the opposition. Those [powers] which reject the legitimacy of the Assad government are not aligned with the position of the majority of the participants of these negotiations."

Ruyvaran suggested that "if the US was prepared to recognize any results reached in this dialogue, in this case the role of the US in the meeting would be completely different." Unfortunately, the observer doesn't believe it likely for the US to abandon its existing position on Syria, even under President Trump.

Ultimately, the scholar admitted that Iran itself does not have the necessary leverage with the US to prevent its representatives from attending if they wished to do so, since the meeting's brokers (Russia, Iran and Turkey) cannot dictate to Kazakh authorities who can and cannot participate in the negotiations.

US Confirms Receiving Invitation From Russia to Participate in Astana Talks