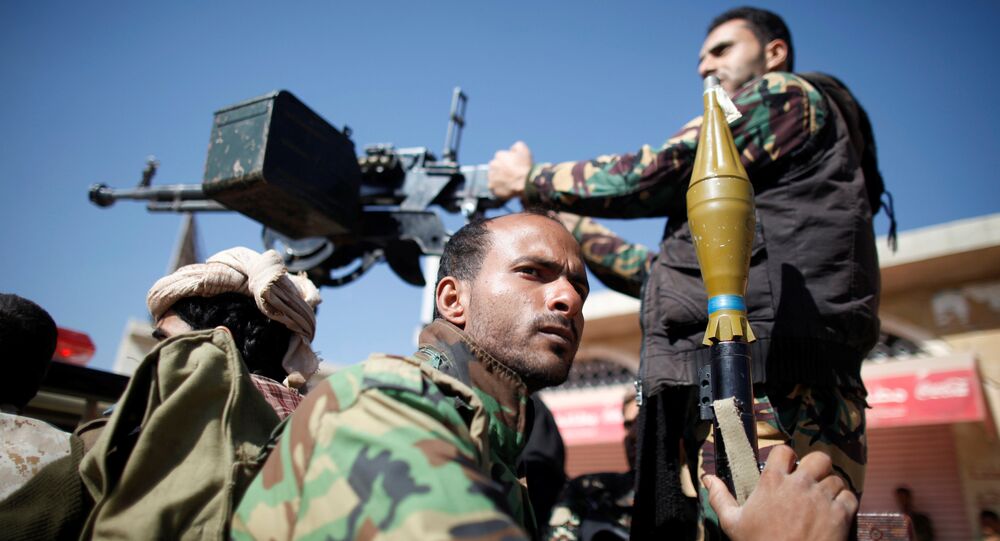 Neither the United States nor the coalition of the Gulf Countries wants a peaceful resolution of the Yemen conflict because they are interested in the continuation of the war there, Muhammed al-Bahiti, a member of the Houthi political movement Ansar Allah, told Sputnik.

© AFP 2020 / Saleh Al-Obeidi
Yemen: UN Renews Push to End Conflict as Death Toll Passes 10,000
In an interview with Sputnik, Muhammed al-Bahiti, a member of the Houthi political movement Ansar Allah, pointed the finger at Washington and the coalition of the Gulf countries for not seeking to resolve the Yemen conflict via peaceful means.

The interview came after the Egyptian newspaper Al-Watan reported that the UN's special envoy to Yemen Ismail Ould Cheikh Ahmed had wrapped up his brief visit to the Yemeni capital Aden.

According to Muhammed al-Bahiti, Ahmed's visit to Aden will bring no tangible results in the solution of the Yemen crisis because both Washington and the coalition are interested in the continuation of the war there.

"The Ansar Allah movement put forward its own initiative which stipulates ending the war, lifting the blockade and forming a unified national government. But the US and its allies are not interested in our proposed scenario on peace. In their opinion, which is constantly broadcast by the world media, the peaceful solution of the Yemen crisis is impossible; so they continue to bombard Yemeni land," al-Bahiti said.

All parties to the conflict should realize the fact that they should focus on a peaceful dialogue rather than the use of force in order to effectively rectify the situation in Yemen, according to al-Bahiti.

"The UN lists the conflict in Yemen as one of the world's worst humanitarian crises."

The worst part about Yemen is the Media blackout

He was echoed by Abdel Malik al-Assar, chief editor of the Yemeni newspaper Al-Hajj News, which predicted that the UN envoy's visit to Aden will be followed by fresh bombing and destruction there.

"Ahmed's visits typically bring new shelling, bloodshed and grief to Yemen. This is done in order to put pressure on Yemenis and force them to yield to demands made by the United States and its allies", al-Assar said.

Meanwhile, UN Yemen Humanitarian Coordinator Jamie McGoldric has said that estimates suggested "that over 10,000 people have been killed in this conflict and almost 40,000 people injured."

In #Yemen, all sides to the conflict have impeded our ability to reach people in need. ALL restrictions on life-saving help must be lifted.

The war in Yemen has had a devastating effect on the country, with an estimated 20 million people — 80 percent of the population — in need of some sort of humanitarian aid. Meanwhile, more than 3 million have been displaced.

© AP Photo / AP
'Houthi Missiles' or Radar Glitch? What Sparked US Warship Attack on Yemen?
The US and UK have also been accused of complicity in alleged breaches of international humanitarian law as a result of their logistical support and continued sale of arms to Saudi Arabia.

Since 2014, the Middle Eastern nation has been engulfed in a violent conflict between the government headed by President Abd Rabbuh Mansur Hadi and Shiite Houthi rebels, the main opposition force within Yemen, who have been supported by army units loyal to former President Ali Abdullah Saleh.
Since March 2015, a coalition led by Saudi Arabia has been conducting airstrikes on Houthi positions at Hadi's request.

US Approves $76 Million in Aid to Yemen, Including Fight Against Cholera