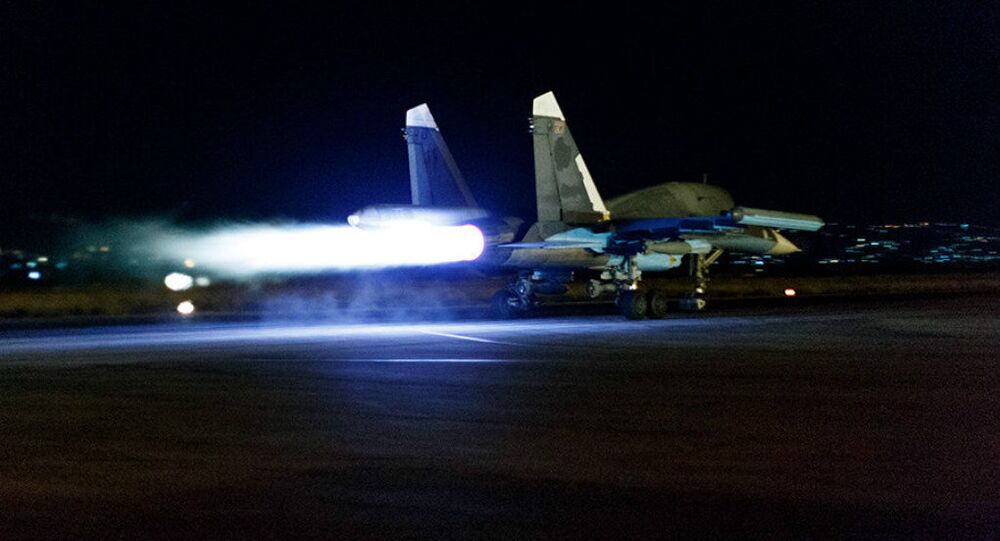 On Wednesday, the Russian military confirmed that Russian and Turkish combat aircraft had carried out their first joint aerial operation against targets in Syria. Speaking to Sputnik, Turkish defense analyst Koray Gurbuz said that the joint operation has effectively forced the US-led anti-Daesh coalition to remember that there's a war on.

Speaking at a press briefing on Wednesday, the Russian General Staff confirmed that nine strike fighters from the Russian Aerospace Forces, including four Su-24Ms, four Su-25s, and one Su-34 bomber teamed up with eight Turkish Air Force jets (four F-16s and four F-4s) to conduct airstrikes against Daesh in al-Bab in Syria's Aleppo province. The strikes, which were agreed with Damascus, resulted in the destruction of 36 terrorist targets.

© Flickr / Expert Infantry / Best of the U.S. Air Force - Department of Defense Image Collection - September 1998
Turkish General Staff Praises First Joint Airstrikes With Russia in Syria's Al-Bab
On Thursday, the US-led anti-Daesh coalition confirmed that it too had conducted airstrikes near al-Bab, although its campaign in support of the Turkish military operation was limited to drone strikes. Turkish military sources confirmed that this was the case even though the US continues to support the Kurdish YPG-dominated Syrian Democratic Forces operation in Raqqah with proper attack aircraft. Furthermore, the military said, the drone attacks were limited to small targets.

Speaking to Sputnik Turkey about the significance of the Russian-Turkish and US-led coalition operations, Koray Gurbuz, a defense analyst at Ankara's Bilkent University, said that there were certainly important differences between the two.

In the first case, he said, "the objectives of the joint Russian-Turkish operation were obvious: to clear the area of Daesh militants and facilitate a return order to Syria."

"If there is order in Syria, Turkey too will be safe," the expert stressed, since "Daesh militants come to Turkey from Syria and commit acts of terrorism here. Therefore, joint actions with Russia are very important to us."

"The US-led coalition forces are also carrying out an air operation against Daesh," the military expert added. "Turkey has repeatedly called on the coalition to support it from the air, but they dragged things out and decided to only perform an operation now, after the start of the joint Russian-Turkish efforts," Gurbuz complained.

© Sputnik / Maksim Blinov
Russia's Deal With Turkey on Flights Over Syria is More Than Meets the Eye
"In fact," the analyst suggested, "the coalition isn't carrying out any kind of a fight against Daesh. Moreover, in their own time, the members of this coalition themselves trained and armed Daesh militants. Now they're trying to show the world that they too are fighting against terrorists. However, this is all a deception. Demonstrative coalition airstrikes are not directed against Daesh targets. If this were the case, Daesh would have been wiped out a long time ago."

Ultimately, Gurbuz stressed that "the agreements between Russia, Iran and Turkey on Syria, and their joint efforts are of great importance for the region as a whole, since they are leading to a comprehensive settlement to the Syrian conflict. For Turkey, they also lead to enhanced security on our borders."

"I have high hopes for the upcoming talks in Astana, the military expert noted. "For Western powers, the idea that the Syrian crisis can be settled without their participation is not something to their liking. And these pseudo-attacks on Daesh targets are made, in my opinion, to try to reduce the significance of joint Russian-Turkish efforts and their own boycott of the upcoming meeting in Astana."

© Sputnik / Mikhail Voskresenskiy
Preparation of Astana Talks on Syria 'Going Very Constructively'
The Syrian government and opposition forces are expected to meet in Astana, Kazakhstan on Monday for peace negotiations brokered by Russia, Turkey and Iran. The meeting will be followed by a UN-mediated meeting in Geneva on February 8.

The representatives of over a dozen armed Syrian opposition groups who signed onto the December 29, 2016 ceasefire agreement are expected to take part in the Astana talks.