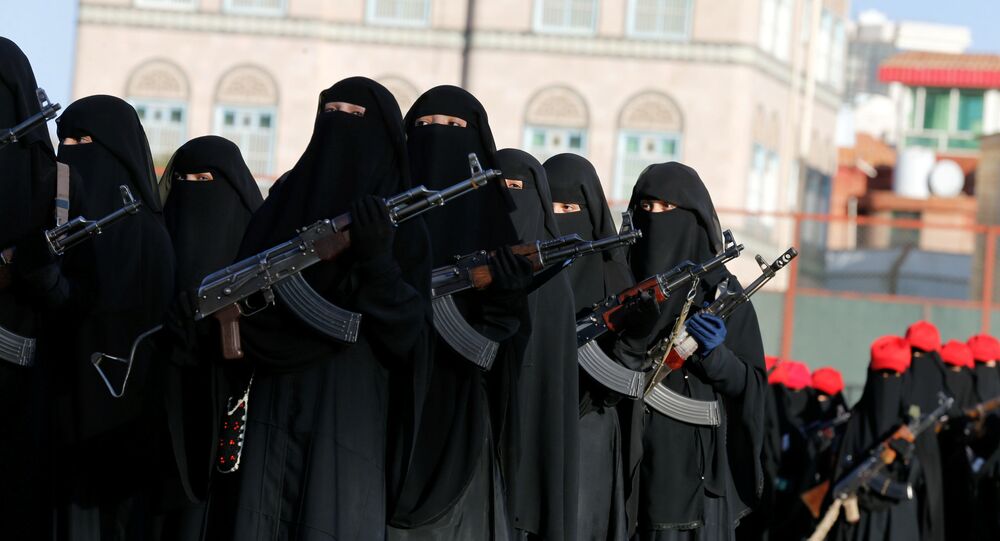 More than 3,000 women staged a demonstration today in Sanaa to protest against Saudi Arabia's involvement in the conflict in Yemen.

The pro-Houthi women, who packed the Sanaa football stadium, carried banners that urged Yemeni women to “fight for peace,” while chanting for victory and marching carrying machine guns and rocket-propelled grenade launchers.

Marching in support of the Houthi rebel movement, they shouted slogans against the multinational coalition forces led by Saudi Arabia.

The protest followed talks this week between a United Nations envoy and the Saudi-backed, Yemeni President Abdrabbuh Mansour Hadi. They attempted to broker a ceasefire to end the brutal conflict.

The death toll in the war in Yemen has risen to more than 10,000 according to the UN, with the organization launching a fresh plea for all sides involved in fighting to put an end to the two-year conflict.

© AP Photo / Hani Mohammed, File
In this Sept. 8, 2015 file photo, children play amid the rubble of a house destroyed by a Saudi-led airstrike in Sanaa, Yemen
© AP Photo / Hani Mohammed
A woman sits next to her malnourished baby at a therapeutic feeding center in a hospital in Sanaa, Yemen. There have been numerous reported cases of dying from starvation in Yemeni hospitals.

The war has led to an estimated 20 million people, which is 80 percent of the population, in need of some sort of humanitarian aid, while more than 3 million have been displaced.

Large parts of the international community, including the UN and numerous human rights watchdogs, have been incredibly critical of Saudi Arabia's aerial campaign in Yemen, with Riyadh accused of targeting civilian sites such as schools, hospitals and markets throughout the conflict.

US Approves $76 Million in Aid to Yemen, Including Fight Against Cholera