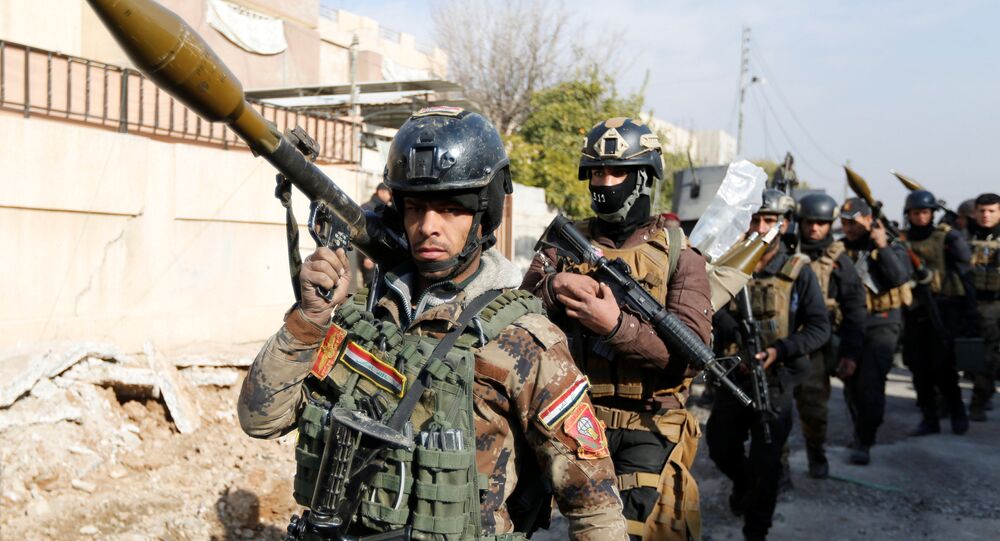 Recently, Daesh has been losing neighborhood after neighborhood in the Iraqi metropolis of Mosul. Nevertheless, the terrorists have succeeded with their overall strategy, despite temporary setbacks, a Norwegian expert argued, forecasting a long and hard-fought war on terror.

© REUTERS / Ahmed Saad
Iraqi Forces Liberate Campus of University of Mosul From Daesh Terrorists
When the battle of Mosul began in October, many believed that Daesh (ISIS/ISIL) would be driven out of the strategically important metropolis within a few weeks. The less optimistic said months, although most experts agreed that the battle would be essentially over by the New Year.

However, the battle took longer than planned, as the progress made by the Iraqi army and Kurdish Peshmerga forces seems to have slowed down somewhat. Researcher Morten Bøås at the Norwegian Insitute of Foreign Affairs (NUPI) ventured that Daesh so far has unfortunately succeeded with its strategy of skirmishes in a battle they are doomed to lose.

According to Bøås, Daesh never intended to maintain full control over the city, which is widely seen as their stronghold and by far the largest city in their self-proclaimed caliphate. Instead, Daesh retreats from district after district, seeking to create as much death and destruction as possible. The aim is to create an impenetrable stronghold, thus playing for time.

© REUTERS / Omar Sanadiki
Moscow 'Far More Successful' at Tackling Daesh in Syria Than Washington in Iraq
Bøås suggested that Daesh's long-term goal is therefore to create cracks in the coalition they face and weaken the anti-terrorist forces on the ground. According to Bøås, the anti-Daesh coalition that involves the Iraqi army, Shiite and Sunni militia, Kurdish Peshmerga forces, Turkish troops and US troops and special advisers is built on shaky ground.

"This alliance will not last forever, it's just a matter of time before it cracks," Morten Bøås said, as quoted by Norwegian newspaper Verdens Gang.

According to analyst and writer Hassan Hassan of the Tahrir Institute for Middle East Policy think-tank, the coalition is likely to lose a good opportunity in Mosul. According to Hassan, the skirmishes are about to wear out Iraqi forces who have been specially trained to counter terrorism. One of the reasons for the quagmire is that Daesh possess a good knowledge of Mosul after having controlled the city since 2014. In December 2016 alone, over 100 Iraqi special troops were killed in ambushes in the city.

According to Morten Bøås, there are three scenarios, yet the outlook for the battle against Daesh is grim regardless of which of them will take place.

© AP Photo / Hassan Ammar
How Saudi Arabia Became New Target of Daesh Terrorists
Firstly, Mosul could be taken by the Iraqi army alone, without too many civilian casualties. Shiite militia and Peshmerga stay outside, and cautious efforts to rebuild the devastated city get underway.

Secondly, Daesh manages to maintain control over parts of the city and is only defeated after a long and exhausting urban warfare campaign, being gradually pushed out street by street and house by house. Many civilians die, as Shiite militia, Kurdish forces and Turkey-supported groups enter the city simultaneously in what Bøås called "the perfect storm."

Thirdly, the coalition wins Mosul but loses peace. The lack of a plan for Mosul's future may create a security vacuum, which in turn stirs a major power struggle, causing further problems.

© AFP 2021 / Daniel LEAL-OLIVAS
'Daesh May Be Losing Territory, But Group Still a Threat' - UK Security Minister
However, even when Daesh is successfully ousted from their Iraqi stronghold of Mosul and their Syrian fortress of al-Raqqa, the future is still grim, Morten Bøås argued.

"Then Daesh will become a traveling organization which attacks where it best suits them. Perhaps the chain of command will be weakened somewhat, but the terrorists themselves can become even more violent than ever," Bøås concluded.