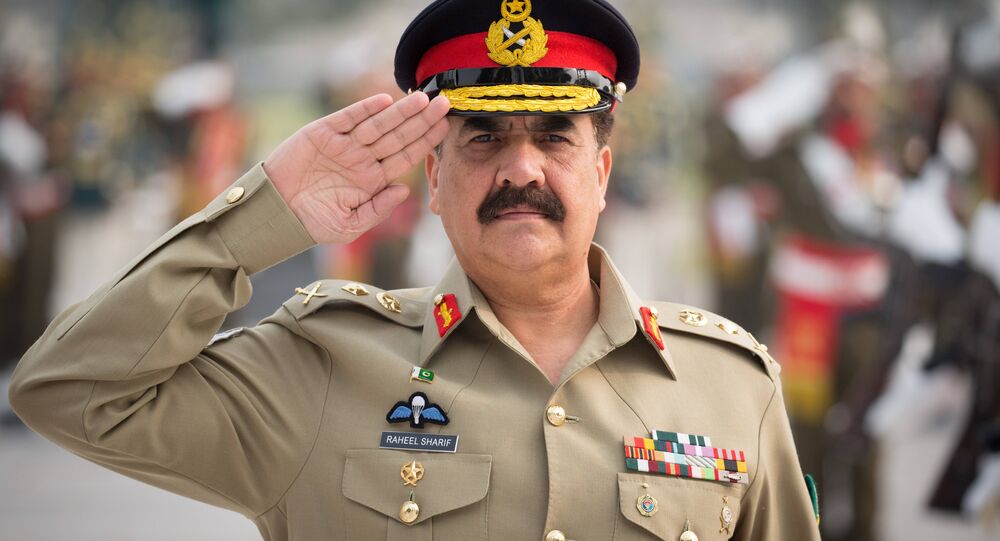 The plan for a new international Islamic army with its command center based in Riyadh, Saudi Arabia, is going ahead. However, it's unlikely to make "any dent in violence in any major Islamic country," an analyst told Sputnik.

The Saudi-led Islamic Military Alliance to Fight Terrorism (IMAFT), dubbed the Muslim NATO, will be made up of 39 Sunni Muslim states under the command of Raheel Sharif, Pakistan's retired army chief.

According to media reports, the announcement that Raheel Sharif would lead the so-called new Muslim NATO came from Pakistani defense minister Khawaja Asif, who revealed the appointment on television.

The IMAFT was created in 2015 to fight Daesh (also known as Islamic State) terrorists, but is not supported by Iran. And it's also unlikely that other "major Islamic" countries in the region will "support its activities," Dr. Amalendu Misra, politics expert at University of Lancaster told Sputnik.

"I think it's unlikely, that this particular force is going to make any dent in violence in any major Islamic country," Dr. Misra told Sputnik.

"All the Islamic countries are fiercely protective of their sovereignty. Are they really going to allow them [IMAFT] to undermine their sovereignty and intervene in their country, how credible is that going to be?" Dr Misra asks.

Dr. Misra also doesn't think it's likely that IMAFT will be allowed in by Egypt or Afghanistan either.

The recent announcement that Pakistan's former army chief is to command IMAFT has led to criticism on social media.

Some Shia political groups have expressed concern meanwhile Sunni groups have come out in support of Sharif.

Another great achivement for Gen. Raheel Sharif, you were pillar of strength for Pakistan and now also for entire Islamic world. pic.twitter.com/cObvTcdVqa

"I would wait and see as to how far they are going to succeed in terms of brokering peace and in undermining the terrorist outfits."