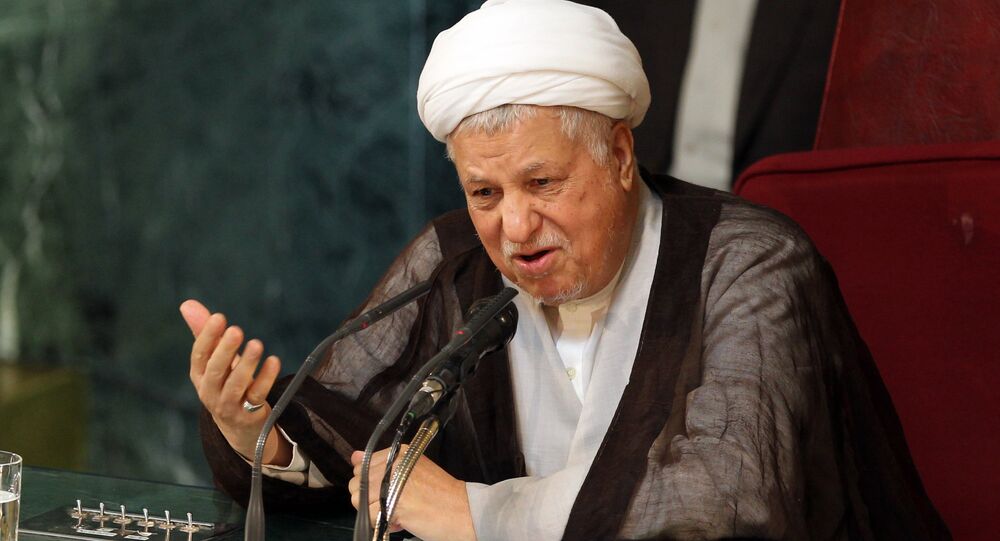 Ayatollah Ali Akbar Hashemi Rafsanjani, has died aged 82. He was the president of Iran from 1989 to 1997. Sputnik Persian takes a look at the much revered leader in Iran and how his efforts paved the way for the historic Iranian nuclear deal.

© AFP 2021 / Raheb Homavandi
Iran's Former President Rafsanjani Dies of Heart Attack at 82
In history of Iran, Rafsanjani will go down not just as a revolutionary and influential politician, but also as a pragmatist and an advocate for detente and stability in the region.

He was also an economic reformer, who contributed greatly to liberalization of the economy and social sphere of the country.

Despite the fact that in the last few years his political glory seemed to have diminished slightly, his influence in international politics is still well remembered because it was his support in the Iranian presidential election of 2013 that became one of the main factors helping current president Hassan Rouhani win.

The new president and the events that followed eventually led to the signing of the Iranian nuclear agreement.

Sputnik spoke with Afifeh Abedi member of the research group on Eurasian region at the Scientific Center of Expediency Council's Strategic Research of Iran. For the 15 years the center was led by Hashemi Rafsanjani.

“He was the president and also head of one of the most powerful state authorities in Iran, which elects the Supreme Leader of the country, the Council of Experts. Ayatollah Rafsanjani in his political life was a great pragmatist,” Abedi told Sputnik Persian.

The analyst further said that during Rafsanjani’s presidency he tried to establish friendly and peaceful relations with all countries and especially with Middle Eastern states.

“Of course, relations with our ally Russia during his presidency gained a new dimension: some of the most important treaties and agreements on cooperation were signed between the two countries during his visit to Moscow.”

© Flickr / Bastian
What's Behind Iran's Plan to Redenominate Its National Currency
In later years, Iran's foreign policy under President Ahmadinejad saw a significant decline in relations with many countries in the region and as a result, people started to remember and pay more attention to the political course of stability and convergence which was led Rafsanjani.

In 2013, it was this support for Rafsanjani that became one of the main factors of victory of Hassan Rouhani's presidential election which then led to the monumental signing of the nuclear agreement.

Chief Editor of Iranian newspaper Iran News, Emad Abshenass, told Sputnik that Ayatollah Rafsanjani has always been a political shield that defended the interests of the country on the international stage and contributed to its stability in the region. “For us it is a big political loss,” Abshenass said.

The editor further said that Rafsanjani had a lot of respect among many world politicians. Even after he was no longer the president, “no matter which delegation traveled to Iran, they always wanted to be sure to see and talk to Mr. Rafsanjani.”

“It speaks of how his authority in international politics was strong and how much he was respected among the leaders of various countries,” Abshenass said.

He further said that the former president was a shield that protected the state system, leading it to success. It was his great role which led to the peaceful settlement of the Iranian nuclear program.

“It was his close-knit team, headed by the current president, Hassan Rouhani which made every effort at the time of negotiations for the Iranian nuclear program, which helped resolving it in a peaceful manner. The result of these efforts was the signing of the nuclear agreement,” the editor concluded.