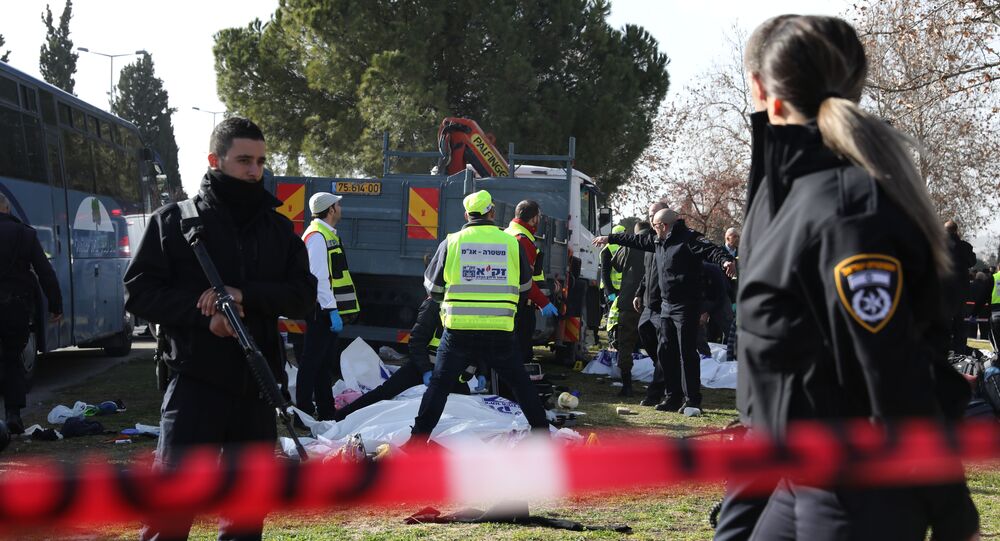 At least four people were killed and 13 were wounded in a truck-ramming attack in Jerusalem, Haaretz reported. According to medics, three young women and one man were killed. The Israeli prime minister said later in the day that the suspected attacker was probably a supporter of Daesh terrorist group.

According to The Times of Israel newspaper, the truck, coming from an Arab neighborhood, rammed into a group of soldiers getting off a bus. Israeli police believe it was a deliberate attack; the investigation is underway.

"It is a terrorist attack, a ramming attack," an Israeli police spokeswoman told Israel Radio.

"We know the identity of the attacker, according to all the signs he is a supporter of Islamic State [Daesh]. We have sealed off Jabel Mukabar, the neighbourhood from where he came, and we are carrying out other actions which I will not detail," Netanyahu said as quoted by Reuters.

According to local media, the attack was supposedly carried out by a Palestinian person and targeted IDF soldiers. Jerusalem Post reported citing police that the suspected attacker was a Palestinian from east Jerusalem. According to police, he had an Israeli driver's license.

Ynetnews reported citing sources that the suspected attacker's name is Fadi al-Qanbar, who was released from prison in east Jerusalem.

Ambulances have already arrived at the site.

Scene of the truck ramming in #Jerusalem courtesy of @Mdais pic.twitter.com/2SV9gY5AI4

#MDA #paramedics are still deployed on the scene in #Jerusalem, risking their own lives to #SaveLives of others!
Watch how they do it: pic.twitter.com/RmipnaxWxS