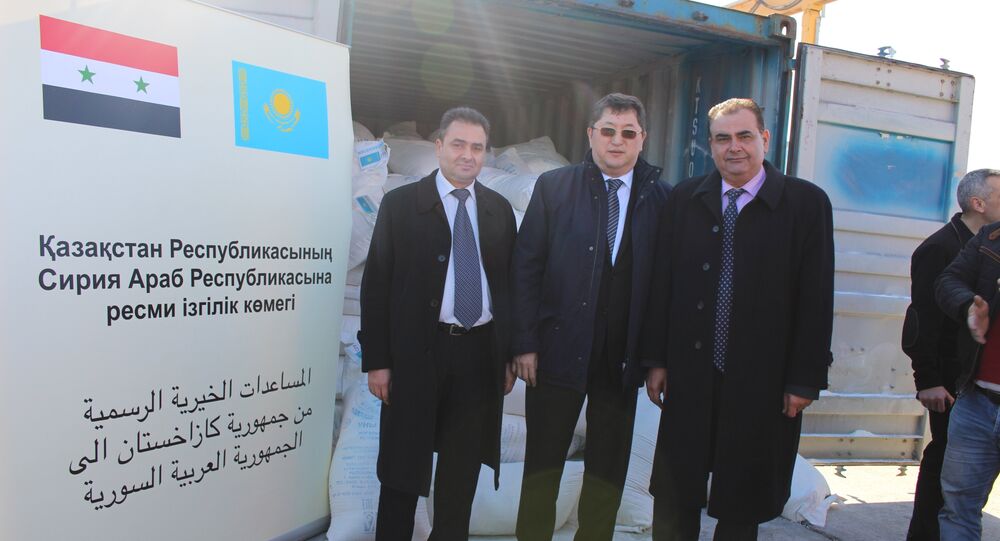 Kazakhstan delivered about 500 tonnes of humanitarian aid to the Syrian people in the form of food products, including flour, canned meat, rice, pasta and tea, according to the country's Foreign Ministry.

"On January 6, 2017, Kazakhstan delivered about 500 tonnes of humanitarian aid to the Syrian people in the form of food products, including flour, canned meat, rice, pasta and tea," the ministry said in a statement.

The humanitarian aid was delivered to the port of Tartus with assistance from Russia, the ministry specified.

The ministry noted that this was not the first aid rendered by Kazakhstan to the Syrian people.

© Sputnik / Andrey Stenin
Russia Delivers Humanitarian Aid to Syrian Provinces of Aleppo, Homs
In 2012, about $400,000 were allocated by the country through the Organization of Islamic Cooperation, to the governments of Jordan and Lebanon to provide assistance to Syrians residing in refugee camps. In October 2015, a memorandum on Kazakhstan providing 300,000 euros to Syrian refugees for the supply of medicine, food and construction materials to Syrian refugees, amassed at the Turkish-Syrian border, was signed in Astana.

Syrians are facing the largest humanitarian crisis as a civil war has been raging in the country since 2011, claiming hundreds of thousands of lives. A nationwide ceasefire came into effect in Syria last Thursday, with Russia and Turkey agreeing to be its guarantors. Radial groups including the Islamic State (IS), the Nusra Front (JFS) and the Kurdish popular protection units (YPG) are not part of the deal.