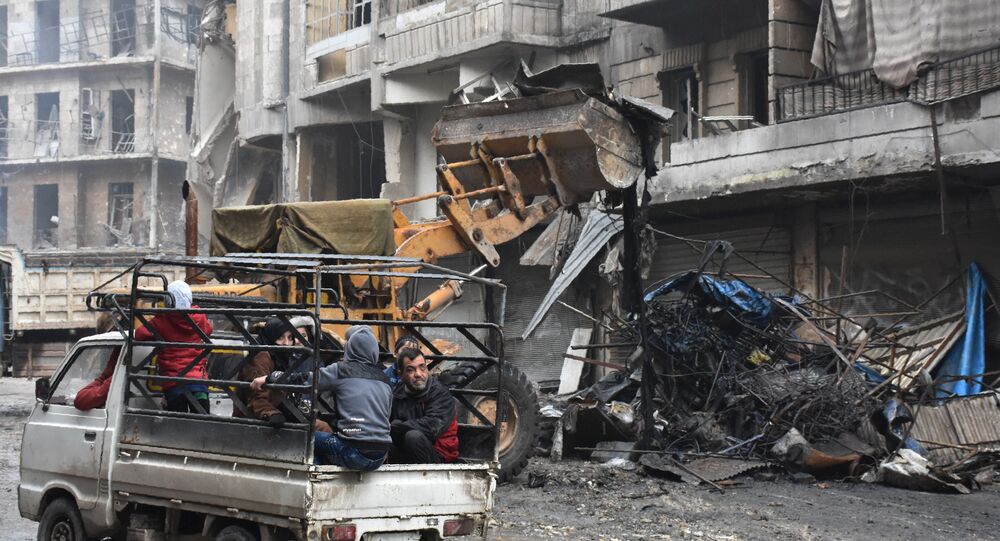 Amid the current ceasefire and ahead of the upcoming negotiations between the Syrian government and opposition in Kazakhstan's capital Astana, Syrian authorities are working on a plan to attract investments in order to restore the country; meanwhile, the Russian media suggests what will be the top priorities for the country's government in 2017.

"We are considering necessary easing of some requirements to attract investments into the country and first of all into Aleppo," Bishr Riyad Yazigi, who came to inspect recently liberated Syria's second-largest city with the government delegation, told Sputnik.

He noted that the Syrian authorities are eager to cooperate with investors who understand the peculiarities of Aleppo and are ready to set special terms for investments.

The minister said that the country's experts are estimating the damage to the historic part of the city and are working on a plan of reconstruction.

© AFP 2020 / Abd Doumany
Syrian Opposition Member to Sputnik: We Don't Want Syria's Breakdown
Meanwhile, the Russian media suggested what will be the top priorities for the country's government in 2017, noting that the Syrian government should draw certain lessons from the long-time conflict.

"It will no longer be a fight against certain ethnic, religious or political groups but a battle for restoration of the integrity of the country," says Russian online newspaper Vzglyad.

It will require unconditional subordination to the government in Damascus. The government, in turn, will face a new task of reconstruction of the dilapidated state and restoration of social and inter-ethnic ties within the country.

In 2016, it says, Damascus emerged as a winner and the geopolitical environment is changing in its favor, which the Syrian government should certainly take advantage of.

Russia, Turkey Will Not Let Syria Be 'Torn' Into Zones of Influence