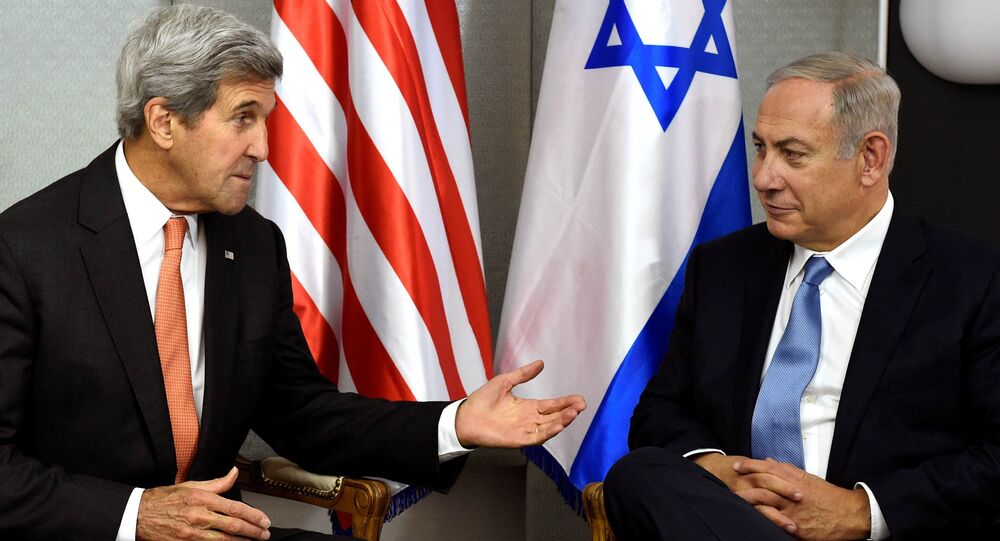 The alliance between the US and Israel is strong despite existing disagreements, Israeli Prime Minister Benjamin Netanyahu said following a spat with the US Secretary of State John Kerry over the stalled Middle East peace process. Radio Sputnik discussed the issue with Dr. Alon Ben-Meir, expert from New York University in Middle East politics.

“Israel has been warned many times that the construction of settlements in the West Bank is an impediment to peace. As long as the settlements continue to expand, the prospects of establishing a Palestinian state will shrink over time,” Dr. Ben-Muir said.

He added that as long as Hamas keeps calling for Israel’s destruction there will be no peace. There is also a great deal of mistrust and insecurity existing between Israel and the Palestinians.

“If you really want to reach an agreement, you have to start a process of reconciliation. The problem is, however, that the Israeli government openly says that it doesn’t want a Palestinian state because it wants to annex much of the Palestinian lands in the West Bank. These are the core issues holding up a peaceful settlement of the Israeli-Palestinian conflict.”

John Kerry said that a two state option was best for an Israeli-Palestinian peace settlement.

© AFP 2020 / Abbas Momani
Palestine to Resume Talks With Israel Only if Settlement Activity Stops
When asked to comment on this, Dr. Ben-Meir said that the "two-state" option was key to ending the conflict because neither Israelis nor Palestinians will enjoy prosperity and security unless there are two independent Israeli and Palestinian states existing side by side.

“This is central to the future of both peoples. Right now Israelis see Palestinians as terrorists and Palestinians see Israelis as occupiers, so what you need to do is to bring the two peoples together and make them talk to each other. Without this there will be no agreement. They have negotiated several times in the past, but they have not reached any agreement. As long as this psychological factor [of mistrust and animosity] exists they are not going to get people to sit down together,” he added.

With the Israeli-Palestinian conflict still unresolved and the “two-state” solution having previously failed, Alon Ben-Meir believes that bringing Israelis and Palestinians together, creating an atmosphere of mutual trust and making them talk to each other, is the only way to end the stalemate.

“If they do not have this atmosphere of peace, they cannot sit together and negotiate.”

Meanwhile, there is growing support in both Israel and Palestine also for a “single-state” solution.

When asked about the advantages and disadvantages of this plan and whether it is possible at all, Dr. Ben-Meir said that he didn’t think so because Israelis want to have an independent democratic state of their own and maintain some control over the Palestinian territories by preventing them from uniting into a single state.

“Israelis fear that someday the Palestinian population will eventually be as large, or even larger, than the Jewish population. One state means that you either have a democratic country [where Jews and Arabs live together as one nation] or you have an apartheid state. I believe that this is too unacceptable even to many Israelis.”

"The Palestinians would accept [the single state option] only if they are treated fairly and equally as Israeli citizens, but this won’t happen,” Dr. Ben-Muir concluded.

© AFP 2020 / TIMOTHY A. CLARY
Palestine to Appeal to UNSC If Israel Fails to Implement Settlements Resolution
On December 28, US Secretary of State John Kerry slammed Netanyahu’s policies backing the expansion of settlements in East Jerusalem and the West Bank as a threat a two-state solution to the Israeli-Palestinian conflict.

In turn, Netanyahu dismissed Kerry’s claims as biased against Israel and barely touching on the root of the conflict that is Palestine’s opposition to a Jewish state in any boundaries.

The Israeli Prime Minister was not the only leader to criticize John Kerry for his speech. British Prime Minister Theresa May also said his remarks were inappropriate.

In response to Mrs. May’s statement, the US State Department said it was surprised by her comment.

The latest development casts another blow to the already strained US-Israeli alliance, but experts predict ties could see a U-turn under a Trump presidency. Earlier, the US president-elect vowed a fresh start in relations with Tel Aviv, when he takes office on January 20.