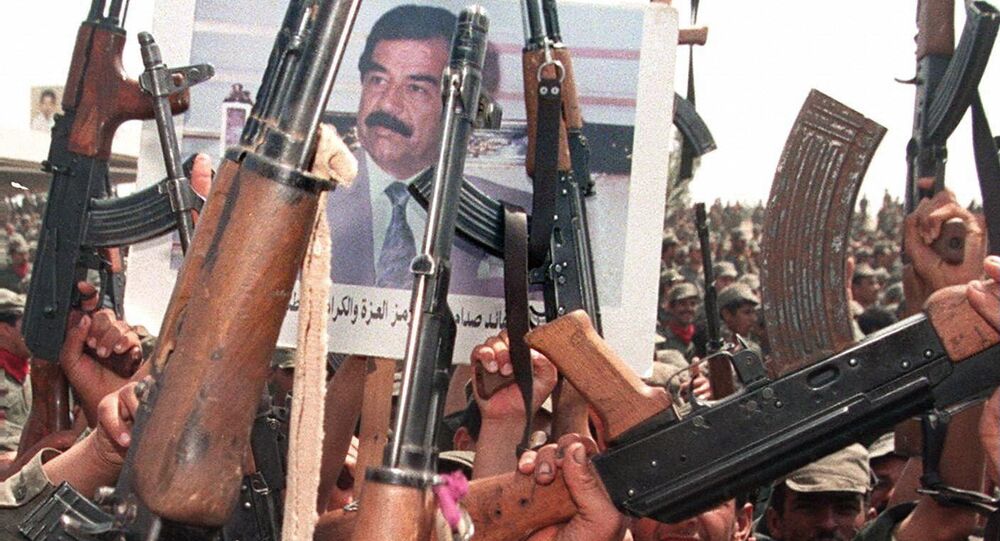 A senior US commander has calculated that it will take at least two years to push Daesh out of Iraq and Syria, and to capture or kill any jihadis attempting to escape. Speaking to Sputnik, geopolitical analyst Navid Nasr suggested that the terrorists could actually be destroyed in a couple months, if they weren't serving US geopolitical interests.

© AP Photo / Marko Drobnjakovic
US Commander: Two More Years to Clear Daesh from Mosul, Raqqa
Speaking to a Daily Beast reporter on Sunday, US commander in Iraq Lieut. Gen. Stephen Townsend said that the current Iraqi and US-led coalition offensive against the Daesh (ISIL/ISIS) terrorists is unfolding about as well as can be expected, and will take up to two more years of hard fighting.

Geopolitical analyst and Middle East expert Navid Nasr has a different view. Speaking to Radio Sputnik, the independent expert suggested that Daesh could be erased from the map in a matter of months, not years, if it wasn't serving the geopolitical interests of influential regional and global powers including the US.

Kicking off with a discussion of the terror group's origins and home base of support, Nasr explained that unfortunately, "a lot of people still fail to appreciate the backstory of Daesh, and also what communities they're rooted in – the communities that gave birth to this organization. We're talking about Saddam [Hussein's] base of support in northern and western Iraq – the [so-called] 'Sunni triangle'."

"You have to remember that many people in Mosul greeted Daesh as liberators – and not just for ideological reasons, but because a lot of the fighters in Daesh are their cousins, their brothers, their fathers," the analyst said. "They're rooted in those communities in Iraq. That's where certainly all their major leaders and commanders, but [also] a lot of their fighters, come from. It wasn't Sauron who whipped them up like orcs – they're rooted someplace, they came from someplace, and a lot of them came from those communities in Iraq."

© AFP 2020 / THOMAS COEX
Iraqi Premier Says Three Months Needed to Eliminate Daesh
The fact that the militants are fighting from their home base of support is why it will be so difficult to defeat them in the long run, according to Nasr. "A lot of them can just shave their beards and go back to living normal lives in Mosul, Fallujah and whatever other cities they're from, until it's time to take up arms again," he said.

Asked by his interviewer how the international community could even allow the self-declared Daesh caliphate to exist for so long, and why US military now predicts years more worth of war against them, Nasr explained that there are broad geopolitical reasons.

"[Daesh] exists because it fulfills a need," he said, "- a geopolitical need for the US, NATO and the [Gulf States]. That's why it exists. If it didn't fulfill that need, it wouldn't last longer than a couple of months, frankly. But it has fulfilled that need under its various names, going back ten years or more since its inception. It fulfilled a need when it originated in Iraq under a different name – al-Qaeda in Mesopotamia. Originating in Iraq, it fulfilled a need to turn the Iraqi resistance into a sectarian internecine conflict."

© AFP 2020 / AHMAD AL-RUBAYE
Saudi Arabian Foreign Minister Accuses Iraqi Shiite Militia of Mass Killings
Nasr recalled that AQIM "was the first [resistance group] to say that its primary target was the internal target." In other words, it explained away the horrors of US occupation by diverting the blame to local ethnic and religious groups. As a result, as the group's influence spread and Daesh eventually began building its 'caliphate', "its primary targets were always people of other ethnicities, other sects, other religions, because they successfully put out this narrative that these people were traitors."

In other words, the analyst stressed, "ISIS has fulfilled that particular [need]…For all intents and purposes, ISIS fulfills the same function as other similar sorts of groups did during the troubles in Ireland, that for example were created entirely by British intelligence and which wreaked havoc, without necessarily fulfilling any grand design for the liberation of Ireland; but they served their purpose, and ISIS has served its purpose in a similar way."

Ultimately, asked whether Lieutenant-General Townsend's estimation about the timeframe required to defeat Daesh is realistic, Nasr said that while it may not take that long, the forces opposing Daesh will have a hard slog ahead. "The difficult part of it is being able to root out a group like this in a place where it has deep roots. People really need to take that into account," he stressed.

© Flickr / Day Donaldson
Daesh Executed Over Dozen Civilians in Iraqi Village in October
The other major difficulty, according to the analyst, is that the Iraqi anti-Daesh forces' most highly effective fighters, the Kurdish Peshmerga, probably cannot even enter Mosul proper, since many local civilians wouldn’t necessarily see them as liberators.

On the positive side, Nasr recalled that the people in territories under Daesh's control who may have initially welcomed the terrorists as liberators have now had a chance to see what life is like under their rule. "There were ideological reasons why Daesh came to the forefront in Iraq, and I think that those ideological reasons hopefully, God willing, have waned, now that people actually see what life is like under these guys."

In any case, the analyst stressed that "the degree of mutual animosity, hostility and hatred that Daesh has festered among all the communities in northern Iraq just can't be underestimated." Therefore, it may prove very difficult for any government to fully restore control, and to prevent some other radical jihadist group from emerging in the future, even after Daesh is dead and gone.

Daesh Executed Over Dozen Civilians in Iraqi Village in October

Over 116,000 Iraqis Currently Displaced Due to Operation to Liberate Mosul