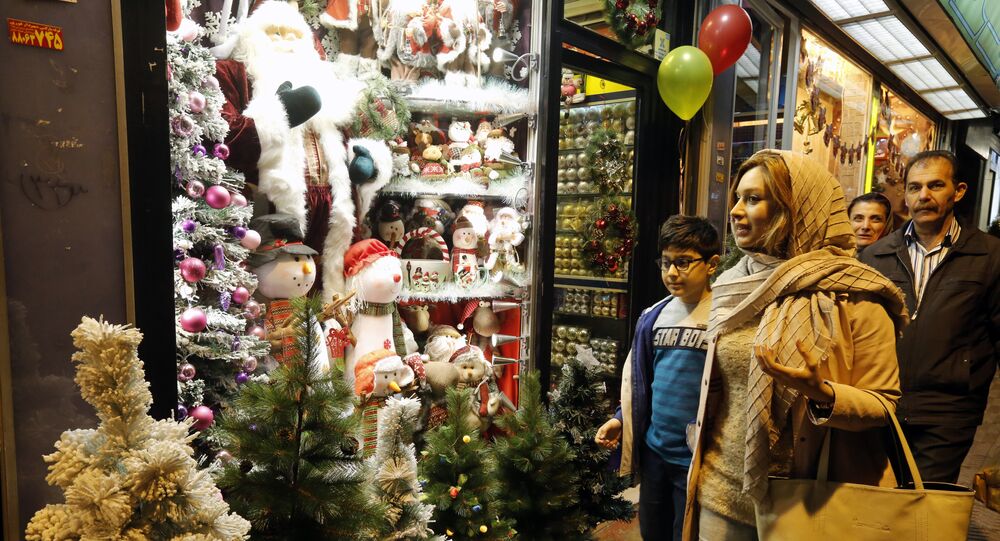 As Christians around the world celebrate Christmas, you might be surprised to learn that the holiday season is also observed in Iran, a predominantly Muslim nation where Christians make up less than 1% of the country's population.

Christianity however has a long history in Iran, dating back to the early years of the faith. It has been practiced in the country longer than the state religion, Islam.

According to the country's statistics, today there are at least 600 churches for 300,000 – 370,000 Christians in Iran, most of whom are Armenians who are followers of the Oriental Orthodox branch of Christianity.

​Christmas trees decorated with red, green and gold gift boxes placed behind shop windows or at the entrances of different shopping malls and hotels can be seen, especially in the Christian neighborhoods of Tehran.

​Decorated trees, along with Nativity scenes of the Virgin Mary, Joseph and baby Jesus, can also be seen.

The festive mood, however, is not just limited to the Christian neighborhoods of Tehran, as some shops, especially those in the northern parts of the city, dedicate at least a part of their shop windows to decorations such as candy canes, snow globes and Santa Claus figures.

​Unlike other countries in the region where public celebration of Christmas is limited to hotels frequented by foreigners, there is no such restriction in Tehran. The sale of Christmas ornaments, which during the first years of the Islamic Revolution was limited to Christian districts, can now be seen around town.

Over the past decade, celebrating Christmas has become increasingly popular among young Iranians, regardless of their religion. The trend has some religious basis, as Muslims acknowledge the birth of Jesus Christ and recognize him as one of God's holy messengers.

​Christmas in Iran is popularly known by the name of "Little Feast." The festival is preceded by "Little Fast," or 25 days of fasting from animal products. The ritual is observed mainly by the Assyrians from December 1, and requires abstaining from meat, eggs and even dairy products such as milk and cheese.

Plenty of meat is cooked up for the Little Feast celebrations though. The main dish for Christmas Day is a kind of chicken barley stew, popularly known as "Harrissa," which is cooked in large quantities and is stored and eaten for several days.

​This year, shoppers lined up for selfies with one of several Santas stationed outside stores on the main drag in Tehran, making Iran an oasis of peace in a region beset by war.

Iran Promises 'Prompt Response' if US Sanctions Are Extended