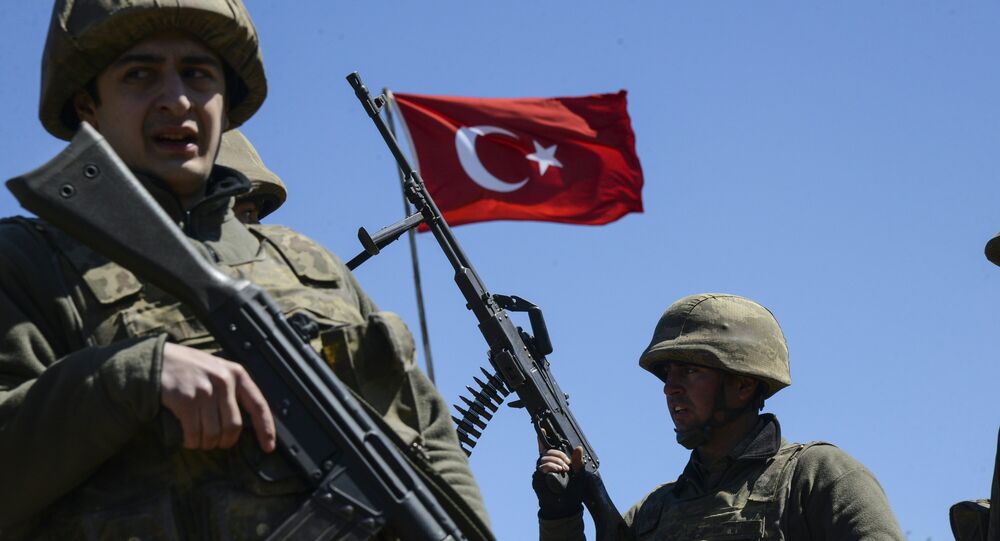 The Turkish General Staff announced that an additional 500 Turkish special forces troops had been sent to reinforce Turkish and Free Syrian Army efforts against Daesh in the northern Syrian city of al-Bab. Turkish ex-commando and security expert Abdullah Agar told Sputnik this is a sign that Ankara now bears the brunt of the fighting in the area.

Turkish newspaper Yeni Safak reports that in addition to the Turkish reinforcements, an estimated 1,400 fighters that had been evacuated from Aleppo are expected to join the fight for al-Bab. Turkey launched Operation Euphrates Shield in northern Syria in August, ostensibly to clear the region from terrorists and turn it into a refugee safety zone.

Speaking to Sputnik Turkey, retired Turkish army commando and security analyst Abdullah Agar said that the recent deployment is an indication that the Turkish military now bears the brunt of anti-Daesh operations in the region.

According to Agar, notwithstanding the battlefield role of FSA fighters in the operation, "at critical moments, FSA fighters are not being used, because it could result in the failure of the entire operation." This is the case, he said, "due to the peculiar, uncoordinated structure of the FSA's forces. Therefore, the main burden in the fight against Daesh in El-Bab is borne by Turkish army units."

© AFP 2021 / GEORGE OURFALIAN
Daesh to Redeploy Forces to Al-Bab 'Through Areas Under Pentagon's Control'
Discussing the difficult nature of Turkish combat operations in the area, Agar suggested that these difficulties are "connected first and foremost with the presence of civilians in the city and its outskirts. The situation is made more difficult by the terrorist attacks regularly conducted by the defending jihadists."

Ultimately, Agar said, "Turkey is on the front lines of a multi-front, multi-state war, the epicenter of which is now located in al-Bab. Daesh fighters, considering this, are bringing in reinforcements from Mosul and Raqqa."

© AFP 2021 / Nazeer al-Khatib
Turkish Military, Free Syrian Army Shell Kurdish Villages in Northern Syria
The expert also complained that Daesh has taken up a strategy of using civilians as human shields, and using civilian casualties as a propaganda tool. "Daesh militants are using every street, every house in Al-Bab as a firing position," Agar emphasized. "In addition, they are actively using the strategy of human shields, transforming clashes into a propaganda source, spreading misinformation about the 'Turkish military killing Arabs.'"

Turkish operations in northern Syria began in late August, and are supported by US-led Anti-Daesh coalition aircraft. The operation has been widely criticized both by Syrian Kurds and by the Syrian government, the latter accusing Ankara of violating Syria's territorial integrity.