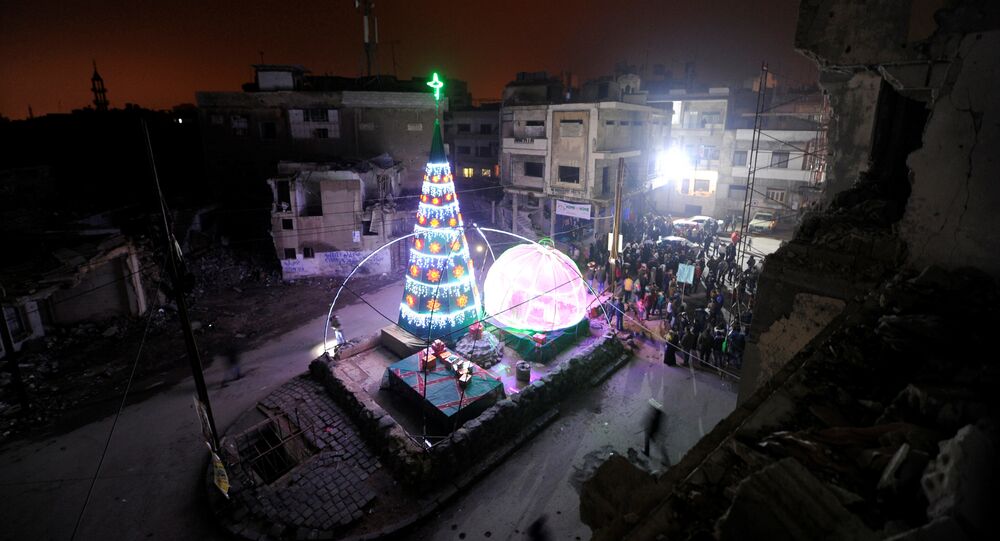 On Sunday, Syria's Christian communities celebrated Christmas. President Assad and the First Lady visited the Our Lady of Saidnaya Monastery. Footage of the president's gesture, and of joyous Christmas celebrations taking place across the country, has prompted social media users to ask: 'Why isn't the mainstream media covering this?!'

On Christmas Day, President Bashar Assad and First Lady Asma Assad paid a symbolic visit to the Our Lady of Saidnaya Monastery and orphanage about 25 km north of Damascus. Footage of the visit, which shows the Assads greeting and embracing the monastery's nuns and children, has since gone viral online.

The Assad family's gesture of support for the country's ancient Christian community has led to questions among social media users about why much of the mainstream Western media continues to berate the country's tolerant secular nationalist government, while tacitly downplaying the radical Islamist beliefs of forces seeking regime change.

Syrian president Assad & wife visiting a church today as part of Christmas celebration. Tell me why again the west has been fighting him ?

Assad's visit to the monastery was just one snapshot amid celebrations that broke out across the country on December 25th as Christians celebrated Christmas, some in defiance of terrorist intimidation and shelling. In the city of Aleppo, much of which had been under terrorist rule for over four years, tens of thousands of Christians publically celebrated the holiday for the first time since jihadist forces arrived in the city in 2012.

Muslim and Christian "Santas" are spreading the joy of #Christmas in the streets of #Damascus #Syria
This is #Syria without terrorist scum! pic.twitter.com/sL8PgFlTrG

Some social media savants, including prominent independent researchers Maram Susli and Kevork Almassian, also weren't shy in criticizing the hypocrisy and ignorance among much of the Western media, and the effort to portray the Assad government and its international allies as the bad guys in the Syrian conflict.

The @Dailybeast thinks a #Syria|n has never seen a nativity scene. Lol 😂 Syria has the oldest churches in the world. @BLNadeau you bimbo! pic.twitter.com/Xvf2Jv0gC1

How the #Christians of #Aleppo celebrate #Christmas after the #US regime change project in #Syria. pic.twitter.com/kVDMw3jGzn

Over the holidays Americans interested in Syria should note where in that country Christmas celebration is possible.

Syria's Ba'ath Party government, which has ruled the country since the 1960s, formally governs under the principle of secular nationalism and Arab socialism, and has made an effort to account for literally dozens of religious and ethnic groups in Syria, including Christians from seven different denominations. The Syrian constitution guarantees religious freedoms, and the country's state-run educational system mandates religious study in Islam and/or Christianity, by parents' choice.

© REUTERS / Omar Sanadiki
'We Waited for This Day for Five Years': Aleppo Residents Celebrate Liberation (VIDEO)
Syrian Christians are estimated to make up about 10% of the country's population; they have been particularly hard hit in the war that has devastated the country over the last six years, with numerous jihadi groups, including Daesh (ISIL/ISIS) and Nusra Front explicitly targeting Christian minorities for attacks in areas under their control.

Ultimately, Twitter users suggested that Sunday's jubilant celebrations were an important sign – that the jihadist efforts to take over Syria have failed, and that the country's long and brutal war may finally be coming to an end.

When the media Says "The western world has failed" in #Aleppo, they mean they failed to stop christmas. They failed to destroy secular Syria pic.twitter.com/B5LDkWNkYO