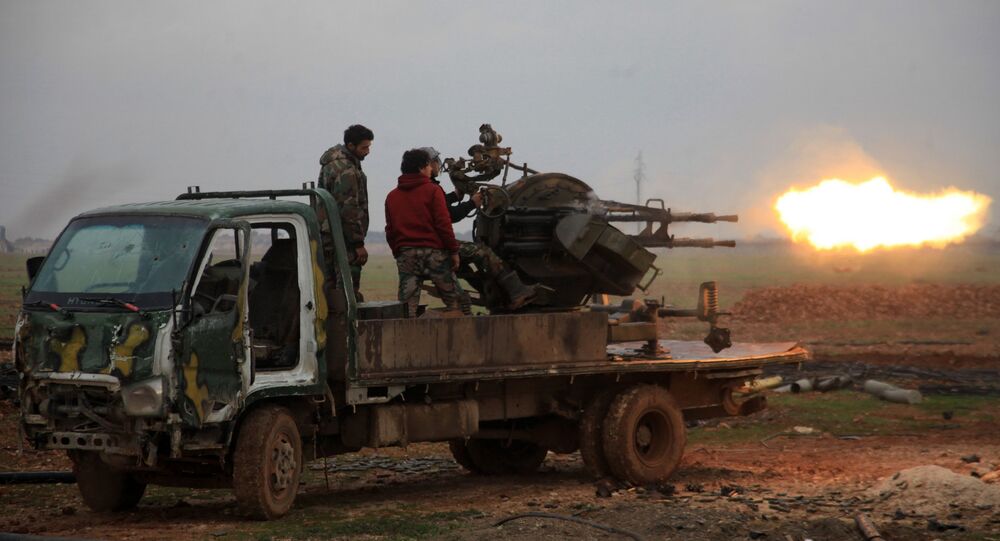 The battle for al-Bab, a scene of intense fighting between Daesh and Turkish troops, is close to an end, President Recep Tayyip Erdogan said. Defense analyst Koray Gurbuz told Sputnik that Washington has indirectly put a spoke in Ankara's wheel since the US-led coalition does not prevent terrorists from moving to the Syrian city.

"The strategically located city of al-Bab is important due to its close proximity to the Turkish province of Kilis, as well as the Syrian cities of Afrin and Manbij. By taking al-Bab under control one will be able to provide security in a sensitive border area and to prepare further anti-Daesh operations," the expert said.

© Flickr / Day Donaldson
Daesh Terrorists Burn Alive 2 Turkish Soldiers, Shoot Dead 2 Other Servicemen
In addition, al-Bab is also located close to Aleppo, the embattled Syrian city which has recently been fully liberated from radical groups. Turkey's cooperation with Russia and Iran played a major part in resolving the Aleppo issue. As a result, Ankara "could count" on Damascus-led forces helping the Turkish army and its allies in al-Bab, the analyst suggested.

This is not something that the United States is happy about, he added.

"Perhaps, this is why the operation in Mosul has become sluggish. Essentially Daesh have been given an opportunity to redeploy its fighters from Iraq to Syria. This is taking place through areas which are controlled by the US-led international coalition. As a result, the United States has complicated the operation to free al-Bab by turning a blind eye on Daesh's movement," he explained.

Koray Gurbuz, a defense analyst at the Bilkent University and the former Chairman of the Turkish Veterans Council, further said that Washington's inaction with regard to the militants moving out of Iraq to Syria could have "bloody implications" for many, including Turkish fighters.

© AFP 2021 / Nazeer al-Khatib
Turkish Military, Free Syrian Army Shell Kurdish Villages in Northern Syria
"The United States was supposed to help Turkey, but they have turned a blind eye on terrorists relocating. As a result they have complicated the situation on the battlefield," he added.

Istanbul-based security analyst Metin Gurcan told Sputnik that Daesh has used the same tactic to keep control of al-Bab as in Mosul.

"Daesh has developed its strategy taking civilians into account. Similar to its approach to Mosul, the [terrorist group] acts like a guided missile using suicide bombers. This strategy has helped them to counter attacks launched by Iraqi security forces. This is why Turkish soldiers must learn from Mosul," he said.

Gurcan further said that the Free Syrian Army fighting along the Turkish military in al-Bab could "disappear." There is "a huge risk" that at the supreme moment Turkish soldiers will be left fighting Daesh on their own, he warned.