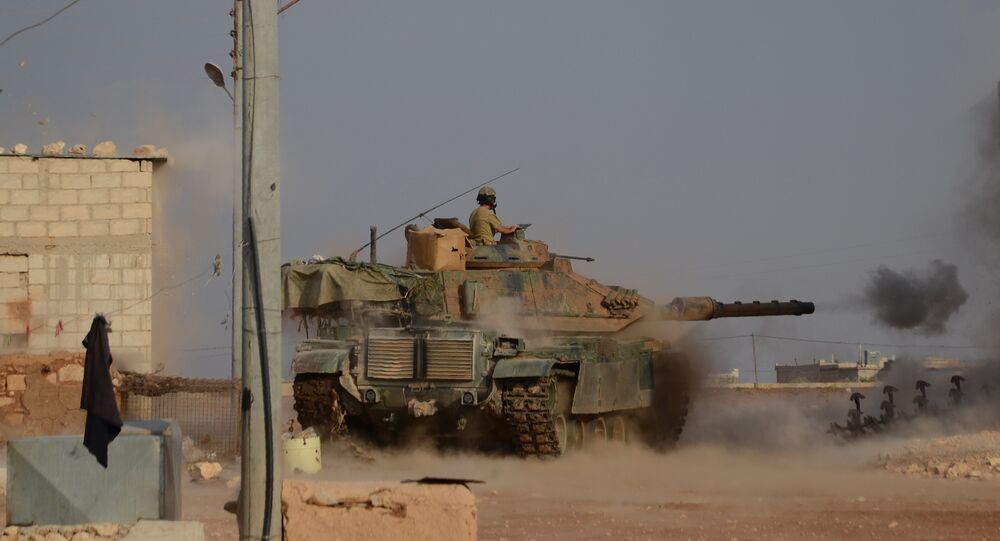 © AFP 2019 / BULENT KILIC
Erdogan Vows to Liberate Al-Bab From Daesh Soon
Afrin is one of the four cantons of Rojava, a de-facto autonomous Kurdish region established in Syria. The region is currently controlled by the Kurdish Democratic Union Party (PYD).

According to Ibrahim, villages in Afrin, situated between al-Bab and Manbij, were attacked by the Turkish Air Force and the FSA with the use of heavy weapons.

He added that the Turkish military was using howitzers while FSA units were shelling Afrin with mortars and Katyusha multiple rocket launchers.

"Over the recent days, Turkey and FSA units have intensified their attacks on the canton. Yesterday, they six mortar shells were fired on the village of Kitne in Afrin. Missile strikes were also carried out," Ibrahim told Sputnik Turkiye.

The attacks killed a local militia fighter and injured several civilians. Those injured were hospitalized in Afrin, some of them in serious condition.

"Despite such attacks, the people of Afrin will protect their villages and their town," the minister underscored.

© AFP 2019 / Nazeer al-Khatib
Free Syrian Army Takes Control of Road Between al-Bab, Aleppo
Ibrahim also said that from time to time Afrin has been attacked by Daesh but local forces have repelled those attacks.

Turkish forces, with assistance from Syrian opposition fighters, occupied the city of Jarablus in northern Syria and are currently conducting an offensive on the Daesh-held city of al-Bab.

Turkish President Recep Tayyip Erdogan said that the aim of the operation is to clear the region of terrorists and Kurdish forces and turn it into a safety zone for refugees.