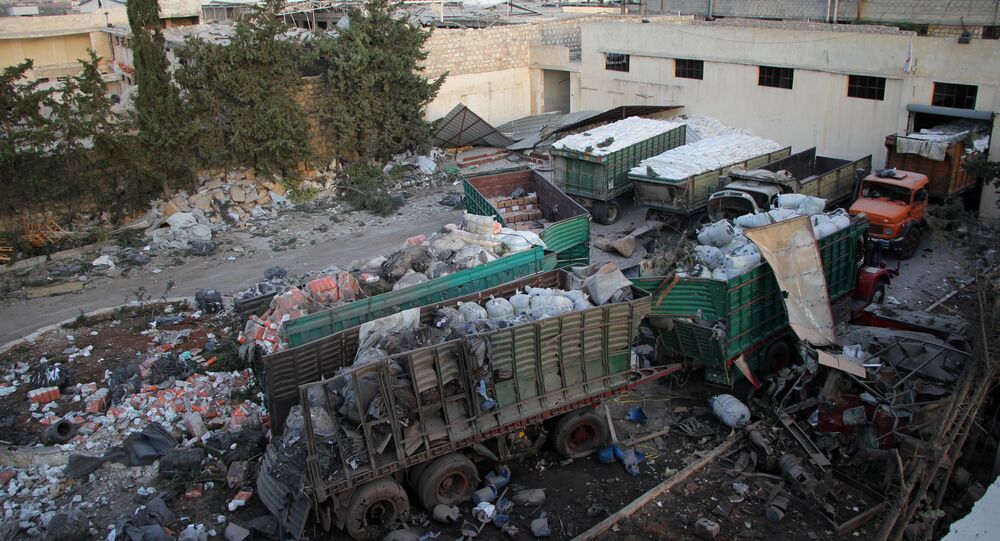 A UN Board of Inquiry into the attack on a UN-Syrian Arab Red Crescent aid convoy in Aleppo in September find it impossible to identify the perpetrators, the board said in a report summary.

UNITED NATIONS (Sputnik) —  An aid convoy operating under the auspices of the United Nations and the Syrian Arab Red Crescent headed to Syria’s Aleppo province was struck by an airstrike on September 16. At least 20 people were killed and 18 of the convoy’s 31 trucks were destroyed in Urm al-Kubra, according to the International Federation of Red Cross.

“The Board found that, while the incident was caused by an air attack, it was not possible to identify the perpetrator or perpetrators,” the report stated on Wednesday.

© AFP 2021 / Omar haj kadour
Members of UN Board Investigating Aid-Convoy Attack in Syria Visited Damascus
The board also stated it had no evidence to conclude that "the incident was a deliberate attack on a humanitarian target.”

According to the summary, aircraft of the International coalition forces and Russian Federation had the capabilities to carry out an attack of the kind. Syria’s armed opposition groups did not have such capability.

The UN Internal inquiry board was formally established by UN Secretary-General Ban Ki-moon on September 30 to investigate the attacks on a humanitarian convoy operating under the United Nations and the Syrian Arab Red Crescent, that was hit by an airstrike in mid-September as it headed to Syria’s Aleppo province. The Board is led by Lieutenant General Abhijit Guha