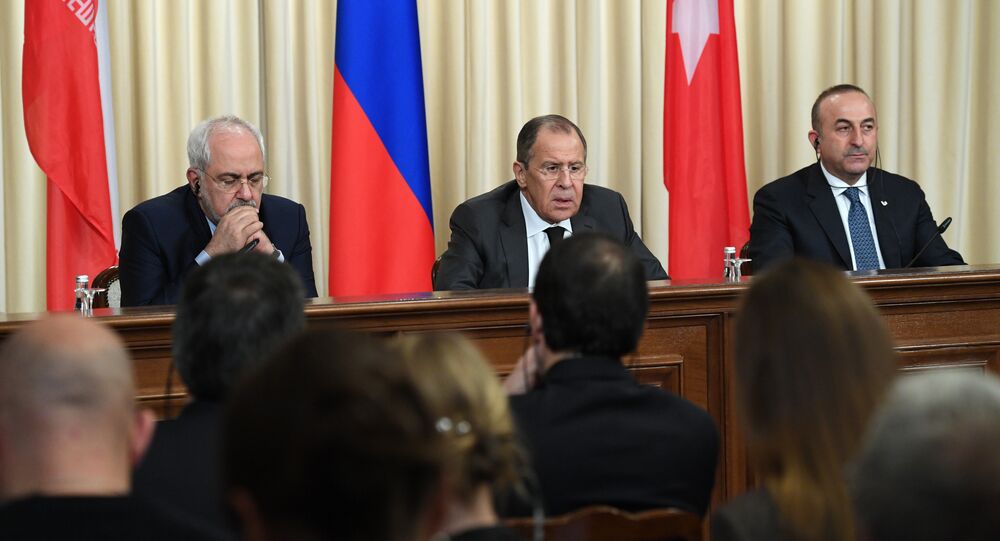 On Tuesday, senior Russian, Iranian and Turkish officials met in Moscow to discuss the situation in Syria. Speaking to Sputnik, Iranian experts explained the significance of the meeting, and why it could be the first step toward ending the Middle Eastern country's long war.

Tuesday's meeting featured talks by the foreign and defense ministers of the three countries. At the meeting's conclusion, the three foreign ministers issued a joint statement about the necessity of reviving the peace process between the Syrian government and the opposition, with the aim of ending the crisis.

The eight-point document confirmed the parties' intentions to respect Syria's sovereignty, independence and territorial integrity, and its status as a multiethnic, multi-religious, democratic and secular state. The ministers also stressed the importance of expanding the ceasefire regime, applicable to any opposition forces that are not members of jihadist terrorist organizations, including Daesh (ISIL/ISIS) and Nusra.

Speaking to Sputnik Persian about the geopolitical implications stemming from the meeting, Jahangir Karami, an expert on international affairs and Russian-Iranian relations, said that the joint statement could be the first step in a "constructive process to resolve the Syrian crisis."

© AFP 2020 / Natalia KOLESNIKOVA
Ankara 'Will Cut Support for Syrian Opposition, Seek Compromise With Russia'
The professor emphasized that the fact that three key parties to conflict, Russia, Iran and Turkey, have managed to come together is highly significant. "After all, if we look at the strategy to resolving the crisis put forward in the past by the European countries, the United States and some Arab states, we can see that these efforts were totally ineffective and unsuccessful. The 'fruits' of that strategy were obvious; the crisis was not averted, but only worsened."

"Moreover, many of the aforementioned countries had no military forces which could in practice actually achieve the desired results on the Syrian front," Karami added. In this regard, according to the professor, the signing of the joint statement in Moscow on Tuesday is an indication that there is a 'critical mass' of relevant powers that can take concrete steps to put an end to the crisis.

At the same time, pointing to the significance of Russian-Iranian military cooperation in Syria, Karami said that it was this cooperation that has allowed for the success of Tuesday's trilateral meeting. In particular, he said, the two countries' efforts to assist the Syrian army in its liberation of the city of Aleppo was crucial. "And Turkey, having lost any hope of overthrowing the legitimate government of Syria by supporting the terrorists, has revised its policy, and been forced to negotiate and sign the tripartite declaration," he added.

For his part, Dr. Mohammad Ali Mohtadi, a senior researcher at the Iranian Research Institute for Strategic Studies of the Middle East, was more guarded in his assessment of Tuesday's meeting. He stressed that this document is an important diplomatic step, but that its implementation will depend on Ankara fulfilling its obligations under the joint statement.

© AFP 2020 / KARAM AL-MASRI
Russia, Iran, Turkey Successfully Evacuate Civilians From Aleppo in 5 Days - Zarif
Furthermore, pointing to the fact that the Russian Ambassador to Turkey had been murdered just a day before the ministers' meeting, Mohtadi suggested that this "terrible act of terrorism served as occasion for Turkey to abandon" its anti-Syrian, anti-Russian propaganda, "and to change its strategy of political dialogue."

"If Turkey provides maximum assistance [to Russia] in the investigation of this murder, it will become clear to us that Ankara is serious about its new policy and commitment to the obligations signed in the trilateral document in Moscow," Mohtadi said. "Personally, I still have my doubts on this matter against the Turkish side. There have been precedents when they have not met their commitments."

"In any case," the expert noted, "the agreement between Russia, Iran and Turkey on the Syrian issue shows that Turkey has undertaken efforts to properly delineate terrorists from the so-called opposition. A clear path to negotiations can be seen to reach a political agreement…without the involvement of terrorists and other extremists."

Ultimately, Mohtadi stressed that this new geopolitical configuration of the three countries can play an important role in weakening the influence of Saudi Arabia and Qatar, the main Arab state actors that are opposed to a peaceful settlement of the Syrian crisis.

© AP Photo / AP
Karlov Murdered in Bid to Foil Russia-Turkey-Iran Progress on Syria - AKP Party
"Already today it is noticeable how much the influence of Saudi Arabia and Qatar on events in Syria has weakened," the expert said. "After all, their interference in Syria's internal affairs had been facilitated via Turkey. By signing the agreement with Moscow and Tehran, Ankara made clear that the Kingdom of Saudi Arabia should not count on its further complicity."

Finally, Mohtadi noted that although Riyadh and Doha have made no indications that they have any intention of abandoning their designs for Syria, "here another important factor – the newly elected US President Trump, could significantly obstruct their efforts to reach their goals. [Trump's] policy on Saudi Arabia and Syria is clear," the analyst stressed. The President-elect has repeatedly said of the Syrian conflict that the US's main priority must be to fight terrorism.