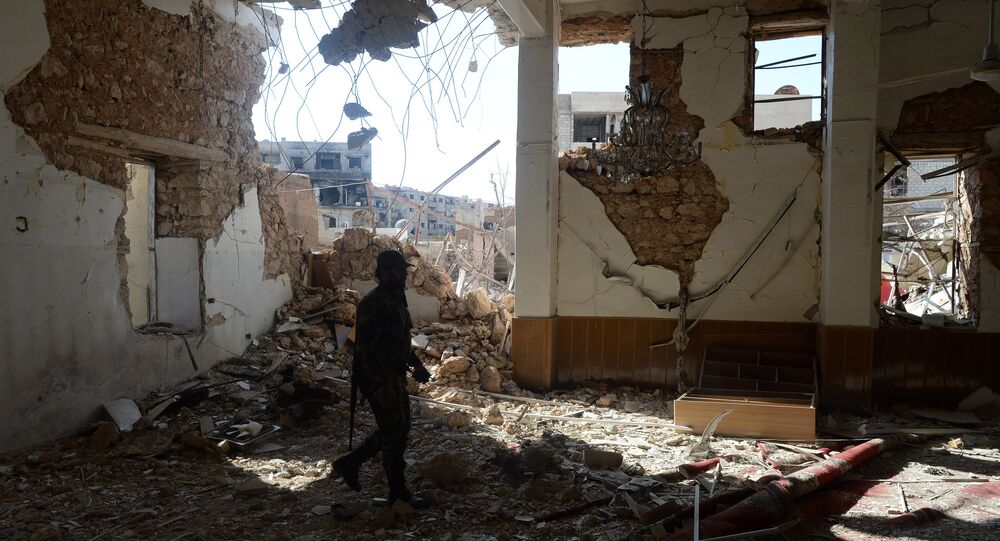 The Damascus suburb of Darayya faced nearly five years of hellish warfare until a ceasefire deal saw militants withdraw in late October. With the government restoring control, Russian journalists were admitted to the war-torn city for the first time. This is their report.

© Sputnik / Nour Melhem
Life in Liberated Aleppo Goes On, Traces of Militants' Presence Seen Everywhere
Before the war, Darayya, located just a few kilometers southwest of Damascus, had a population of about 80,000 people. Now, RIA Novosti says, the city is almost completely empty. At the entrance along its central road is a government army checkpoint; following that is a pile of vehicles, including busses, cars and armored vehicles riddled with bullets and shells.

One of Syria's oldest cities, Darayya was considered affluent, due to its developed industrial base. Today most of the urban area has been turned into piles of rubble and debris.

Reporters see a child's toy, a teddy bear, with strange wires coming out of it. Apparently the jihadists left behind hundreds of home-made mines and booby traps. Now, authorities say, the main task has been to demine homes, buildings, utilities infrastructure and other facilities.

© Sputnik / Mikhail Alayeddin
Syrian army troops move through the town of Darayya, a suburb of Damascus.

Speaking to the Russian journalists, Omran Haysan, chief of the Syrian Higher National Committee's operations group, explained the city's strategic importance: "This city was a key position for [the militants'] offensive against Damascus, thanks to its favorable geographic position. Foreign-backed militants turned it into a terrorist enclave, using all weapons available to them. From the start, the government and army sought reconciliation. However, the militants rejected any political and diplomatic efforts to resolve the crisis."

In the heart of Darayya is the Church of St. Paul; according to Christian legend, the ancient location was the place where Paul the Apostle met God on the 'road to Damascus' and embraced Christianity between 33 and 36 AD.

Speaking to the reporters, an army lieutenant colonel named Hassan explained: "The militants used it for its own purposes, dug a tunnel near it to store weapons, medicine and food. They looted the church's relics." Near the church the jihadis created a small farm, using icons torn from its walls to make a makeshift fence.

Just 30 meters from the Church of St. Paul is a mosque, which insurgents also fortified, resulting in severe damage during fighting. Large holes from mortar shells are seen punched through the religious site's dome.

© REUTERS / Omar Sanadiki
Number of Settlements Joining Syrian Ceasefire Reaches 1,073 - Russian Military
The campaign to liberate Darayya took about nine months. According to General Yasser Basu, civilians aided the Syrian army as it made its advance. Now, the terrorists have been completely evacuated, to Idlib province, and they won't be able to terrorize Damascus or its suburbs anymore.

"About 3,000 militants and their families laid down their arms and returned to civilian life," Basu said. "They have been granted amnesty under the relevant presidential law. Some 4,000 more have left the area to continue on fighting, most of them foreigners," the general added.

Darayya is now faced with what seems like an impossible challenge of restoration. The city has no electricity, no centralized water supply. The streets are littered with rubble and debris. Its residents are temporarily housed in camps for internally displaced persons. The settlement remains guarded by elements of the 4th Armored Division of the Syrian Army.

Damascus Suburb Resurrects as Militants Withdraw Under Deal With Gov't

Residents of Liberated Darayya Get Rid of Useless Rebel-Issued Passports