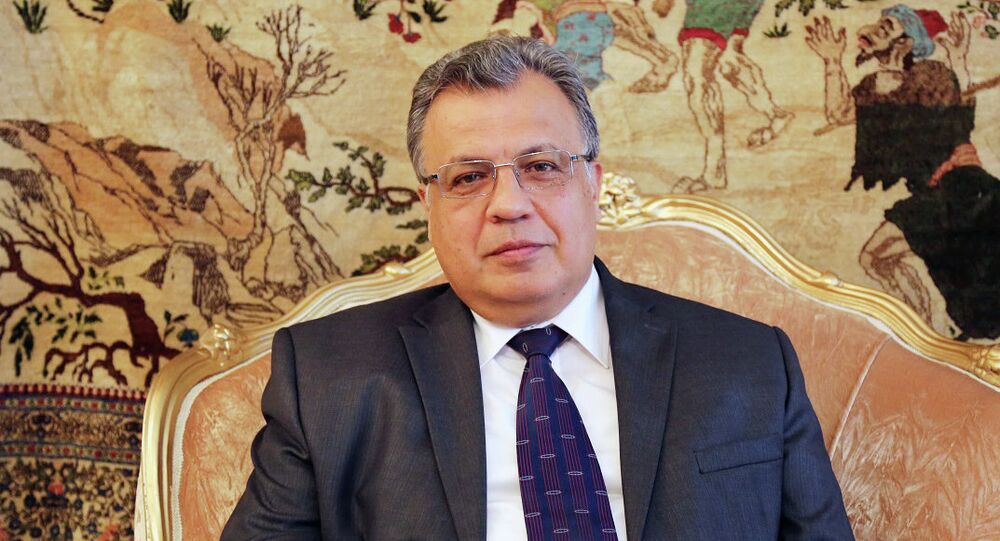 Russian ambassador to Turkey Andrey Karlov who was fatally wounded in an armed assault in Ankara has died, Russian Ministry of Foreign Affairs said in a statement on Monday. Moscow now views the murder of Russian Ambassador in Ankara as a terror attack, the statement said.

"We qualify what happened as a terror attack. We are currently in contact with Turkish authorities who are assuring us that a thorough, comprehensive investigation will be conducted." Russian Ministry of Foreign Affairs spokeswoman Maria Zakharova said.

The attack took place at the opening of the "Russia through Turks' eyes" photo exhibition.

Local TV reports that the killer had a Turkish police ID. He showed when entering the exhibition.

© REUTERS / Umit Bektas
Russian Ambassador to Turkey Shot in Ankara - Russian Foreign Ministry
The Ambassador was not taken to the hospital immediately after the attack. It was reported that he received medical help on the site first and was rushed to the hospital after that.

"Today is a tragic day in the history of Russian Federation," Zakharova said in a statement. "Today in Ankara, during a public event, Russian Ambassador Andrey Karlov was shot and, shortly after that, he died."

Russian Ministry of Foreign Affairs said that it is receiving condolences from foreign colleagues. EU foreign policy chief Federica Mogherini was one of the first ones to offer her condolences, Zakharova said.

Andrey Gennadievich Karlov was born in 1954. He was appointed Russia's Ambassador to Turkey in 2013.

Russia demands that the event be recognized as an act of terror, while the UN has condemned the attack.

According to Turkish security officials, the gunman who allegedly shot the Russian ambassdor was a former police officer working in Ankara, but was not on duty when he shot the ambassador. Recent reports suggest that the former Turkish law enforcement agent has been identified as Mevlüt Mert Altıntaş, a member of the Ankara Riot police born in 1994 who worked in the Turkish capital. The gunman shouted, "Don't forget about Aleppo, don't forget about Syria, Allahu Akbar…"

Reports have also emerged that the gunman yelled, "We die in Aleppo, you die here."

© AP Photo / Burhan Ozbilici
People react after the the Russian Ambassador to Turkey, Andrei Karlov, was shot at a photo gallery in Ankara, Turkey, Monday, Dec. 19, 2016

​Turkish officials have labelled the incident a terrorist attack. Turkish state media outlets have reported that the gunman has been "neutralized" since the shooting. The Russian ambassdor, Andrey Karlov, was killed in the vicious attacks while touring an art gallery. A Lebanese writer has indicated that while the incident could have global implications, "one must ask, who would want to trigger a regional war?"

Following the assassination, the Turkish government has stepped up security efforts around the Russian Embassy sending special forces, while the US Embassy in Turkey closed down altogether.