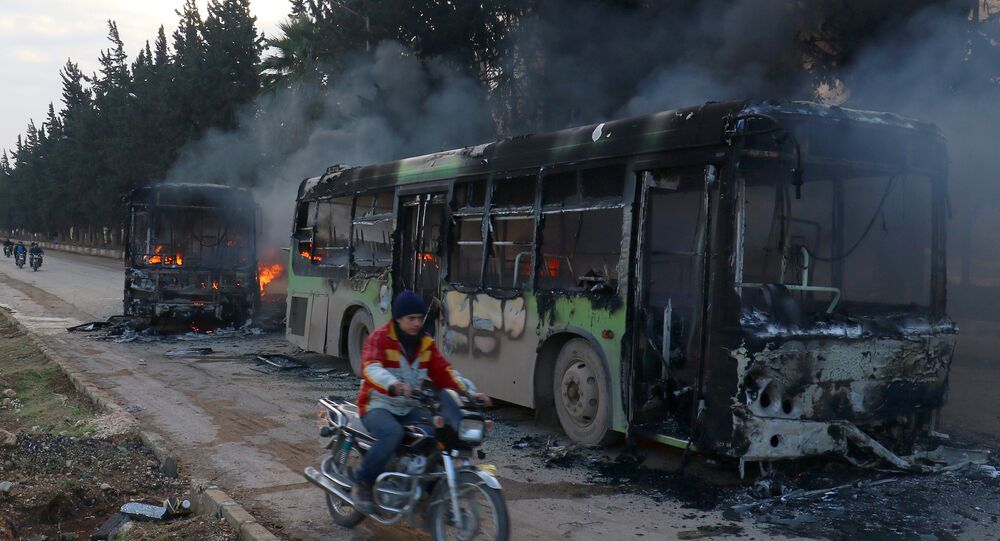 Militants set on fire seven buses heading for the Syrian besieged towns of Fuah and Kafarya for evacuation of civilians, a source in local militia told RIA Novosti.

"The militants have broken the deal again. They set seven buses on fire, which were heading for Fuah and Kafarya to evacuate people," the source said.

Syrian state television, as well as SANA news agency, reported that these militants were armed terrorists.

Most of Fuah and Kafarya's residents are Shi'ite Muslims.

Minutes after buses enter Fouaa and Kafraya, the jihadists ruin the ceasefire deal by attacking another bus convoy. pic.twitter.com/S6U43wQa36

After the incident, a number of buses headed for the Kefraya instead of those that had been burned, Organization of Syrian Arab Radio and TV reported.

Earlier today, the Syrian government has demanded the evacuation of over a thousand residents from the besieged towns of Fuah and Kafarya in exchange for evacuating the militants still in Aleppo.

© Sputnik / Mikhail Alaeddin
Convoy of Buses Enters Eastern Aleppo to Take Out Remaining Militants
On Sunday, buses began arriving in east Aleppo in preparation for removing the militants still in the city.

The proposed agreement involves letting 1,200 residents of the two towns in the Idlib province leave the besieged areas in return for evacuating a similar number of militants and their families from Aleppo, Syrian state television reported on Sunday.

The militants will not be able to leave until the evacuation of Fuah and Kafarya is complete, the government said. Fuah and Kafarya are the only government-held enclave in Idlib's vast militant-held area. The towns of some 20,000 people have been under siege since 2013. The humanitarian situation remains dire, with a lack of food and basic necessities.