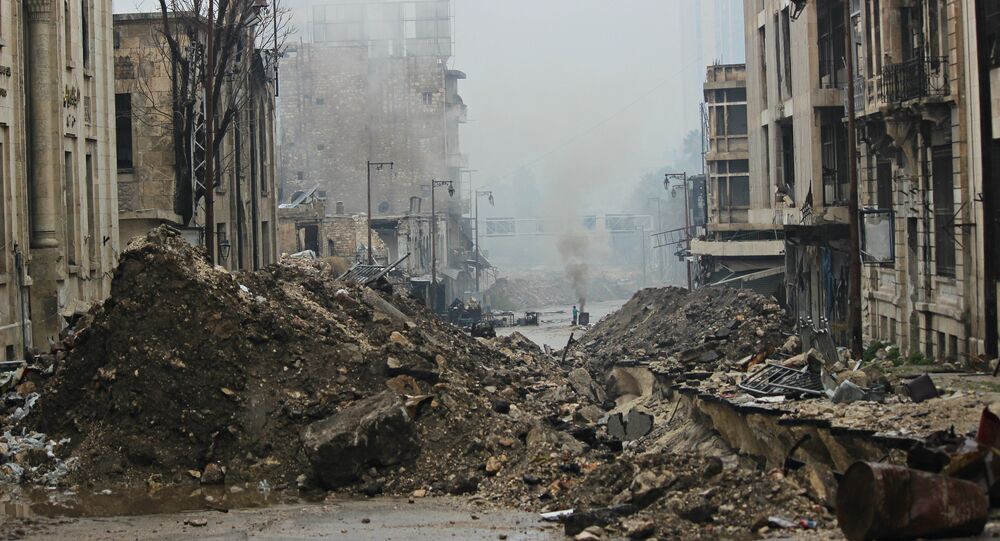 On Friday, the Russian Defense Ministry's reconciliation center reported that the Syrian army's operation to liberate the eastern neighborhoods of Aleppo was completed, drawing the line under a long-time battle for the city.

MOSCOW (Sputnik) — Aleppo is the second largest city in Syria and the capital of the Aleppo province. Before the Syrian conflict broke out in 2011, Aleppo was the country’s economic capital and the largest industrial center.

Since August 2012, the western part of the city has been controlled by the Syrian army while the eastern part was occupied by various Islamist and insurgent groups, the most active of which were Daesh and al-Nusra Front, outlawed in Russia.

© Photo : Vanessa Beeley
Syrian Army Gains Full Control Over Aleppo - Source
Over the years of warfare, neither side of the conflict has managed to gain a serious advantage, however the conflict resulted in the decrease of Aleppo population from 2.5 million to less than a million.

In early February 2016, the Syrian Armed Forces supported by patriotic militias broke the four-year blockade of the settlements in the north of the Aleppo province. The government forces cut off main supply routes of terrorists running from Turkey to the northern Aleppo’s suburbs.

The Syrian army and militia achieved a significant breakthrough in their fight against terrorists after the ceasefire announced on February 27. The ceasefire did not concern the groups recognized as terrorist organizations by the UN Security Council (UNSC).

Throughout April, the terrorists regularly carried out large-scale missile and mortar attacks against the districts of Aleppo controlled by Damascus, including the residential areas.

On April 27, an attack on the al-Quds hospital in Aleppo killed 14 people, including three doctors.

The Syrian government claimed that the Ahrar ash-Sham group allegedly supported by Turkey was behind the attacks on Aleppo.

In mid-June, the Syrian armed forces stopped a major offensive by the al-Nusra Front in the north of the Aleppo province near the Syrian-Turkish border.

On June 25, the troops of the Syrian army with support of militia carried out an offensive near the districts of Khalidiya and Bani Zeid in Aleppo. Damascus forces established control over a cotton plant and several residential buildings.

In early July, the military activities in Aleppo itself intensified after the Syrian army and militia repelled an attack of Jaysh al-Islam on the Mallah farms in the northern suburb of Aleppo, liberated the farmlands and cut off the terrorists’ main supply route from the Turkish border down the Castello Road.

On July 10, the Syrian Armed Forces, supported by aviation and artillery, defeated the troops of al-Nusra Front and Jaysh al-Islam in northern Aleppo.

On July 28, the Syrian government army established control over the Handarat refugee camp to the north of Aleppo. On the same day, the army liberated Bani Zeid, which was the largest stronghold of the terrorists in Aleppo. It became possible to storm the district after the government forces surrounded the occupied areas in the eastern and northeastern Aleppo in a dense circle and cut off all supply routes of the militants from the province of Idlib and Turkey.

MSM will not show U civilians being evacuated with the help of #SAA from eastern #Aleppo to safe areas!
I can't see a massacre here! Can U? pic.twitter.com/KQ7TZAx9HG

© Flickr / MattysFlicks
Mainstream Media Engaged in ‘Falsifications’ Around Aleppo – Italian Journalist
​On July 28, Moscow and Damascus launched a large-scale humanitarian operation to help the civilians of Aleppo. Russian Defense Minister Sergei Shoigu announced that three corridors would be open for the civilians as well as for the militants, who expressed wish to surrender and to leave the city, and one more corridor for the militants with arms and machinery.

On July 30, Syrian Reconciliation Minister Ali Haidar announced that the militants from the armed groups in eastern Aleppo had divided into two groups, one of which wanted to surrender and the other to continue fighting.

In early August, the Syrian army blocked the major part of the militant forces in Aleppo. The western districts of the city were controlled by the army while the eastern districts were occupied by the terrorists. Intensive warfare continued in the southwest and the south of the city. Some 5,000 to 8,000 militants from various groups united under the leadership of the al-Nusra Front. The terrorists continued their attempts to unblock the supply routes for their accomplices in the eastern districts and to break the blockade. Eventually, the militants seized the areas of military schools and a major part of the 1070 housing project.

On September 22, the government forces began a military operation in the eastern districts of Aleppo.

In September, the United Nations reported that the airstrikes on Aleppo resumed. The Syrian military claimed that their aviation did not target a single civilian facility or civilian infrastructure and only targeted the military facilities and aggregations of terrorists with thorough prior reconnaissance and monitoring.

On October 8, the Syrian Army liberated the Huweija district.

The Green Fleet
The evacuation of the militants and their families from eastern #Aleppo via AlRamouseh corridor pic.twitter.com/wAie3uMjiY

© REUTERS / Abdelrahmin Ismail
'Threat of a Jihadist Belt is Real' Along Turkish-Syrian Border
​On October 15, Syrian engineers found a tunnel east of the citadel in the old city and blew up part of it. During the conflict, militants had been digging tunnels between the buildings in the historical part of the city in order to organize subversive attacks in the rear of Damascus forces.

On October 18, Russia’s Aerospace Forces and the Syrian Air Force stopped airstrikes at the Aleppo area. Russian and Syrian aircraft stayed 10 kilometers (6 miles) away from the city for a week.

On October 28, the terrorists attacked the Syrian Armed Forces deployed in the southwestern part of the city. The army and militias repelled two attacks. According to the military intelligence’s information, the terrorists used the humanitarian pause to redeploy over 8,000 fighters to the southern and northern parts of Aleppo. They attempted to break into the eastern districts of the city where large groups of their supporters had been blocked.

On October 30, militia units reported that the terrorists used shells containing poisonous gas to attack them and Syrian Army units deployed near the military academy in southwestern Aleppo.

Throughout November, the Syrian Armed Forces gained considerable ground in eastern Aleppo, seizing approximately half of the territory from the terrorists. According to the Russian Defense Ministry's center for Syrian reconciliation, by late November the government troops have liberated over 40 percent of eastern Aleppo.

© REUTERS / SANA
De Mistura: Shelled Russian Hospital in Aleppo Deemed to Be Used for Evacuations
On December 5, a mobile Russian military hospital was attacked in Aleppo. During the attack two Russian medics were killed and one more was injured. The Russian Defense Ministry described it as premeditated murder and cast the blame upon it on the so-called moderate opposition and its Western sponsors.

During the battle for Aleppo, Russia had repeatedly contributed to establishment of humanitarian pauses in the city, all of which came to nothing due to the UN humanitarian bodies’ inability to deliver aid and because of the militants’ actions. On December 8, the Syrian Army suspended fighting for the largest relief operation to allow civilians leave the city.

On December 9, Lt. Gen. Sergei Rudskoy, the chief of the Russian General Staff Main Operational Directorate said at a briefing that the Syrian Army had liberated 52 districts in eastern Aleppo in successful offensive operations.

On Monday, Russian Defense Ministry spokesman Major General Igor Konashenkov said that the Syrian Army had established control over 96 percent of Aleppo after liberation of another five districts in eastern Aleppo.

​On Tuesday, Damascus forces had been involved in mop up operations in Salaheddine district

On Thursday, Lt. Gen. Viktor Poznikhir, the first deputy chief of the Main Operational Directorate of the Russian General Staff said that the militants had been driven from all the district in Aleppo and a total number of liberated districts had reached 105.

According to the Monday estimates of the reconciliation center, more than 100,000 civilians including 40,000 children have been evacuated from Syria’s eastern Aleppo since the government operation to liberate the city began. The reconciliation center added that over 2,000 militants had laid down their arms since the beginning of the operation and almost everyone was granted amnesty.