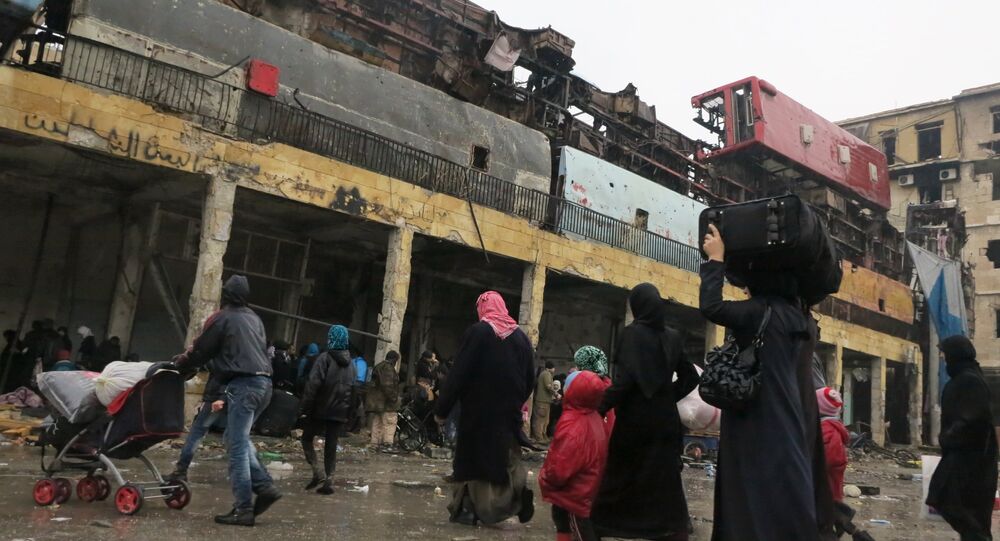 Military correspondent Kamel Saker told Sputnik Arabic about the humanitarian situation in liberated Aleppo and efforts by the Syrian Army to help people.

© Sputnik / Ali Hassan
'Aleppo Residents Heaved a Sigh of Relief After the City Was Liberated'
"I’ve been in Aleppo for several days and I’ve seen how the military, political and humanitarian situation in the city evolved. Yesterday, I visited four districts freed of terrorists. The evacuation of people to tent camps is well organized. The Syrian military command managed to find personnel to help civilians. Everything necessary has been supplied, including transport, food and medicines," Saker said.

The reporter also said that militants made money on selling humanitarian aid, particularly food, to locals.

"When Syrian soldiers entered apartments occupied by militants they saw that they had made a fortune selling food supplies. They were monopolists and banned other people from selling foods. They set prices 20 times higher than they should be," he said.

© REUTERS / Omar Sanadiki
This is Why MSM Continue to Spread Myths About 'Syrian Army's Atrocities in Aleppo'
According to Saker, the UN and its human right agencies failed to maintain humanitarian aid supplies to Aleppo residents.

The correspondent reminded that a similar situation took place in the Damascus suburbs when they were under militants’ control.

"I can confirm that international humanitarian organizations don’t help people in Aleppo. They talk a lot, they pass resolutions, but their actions have nothing to do with reality. The Syrian government, the Syrian Army and the Russians are those who are helping," Saker said.

Syrian Parliament lawmaker from Aleppo Mohammed Jalal Darvish told Sputnik Arabic that now with the city freed of terrorists a lot of work needs to be done to restore Aleppo.

© Sputnik / Ali Hassan
Civilians of Aleppo 'Welcome Syrian Soldiers as Heroes' (VIDEO, PHOTOS)
"The liberation of Aleppo did not take much time, but now we have problems of another kind. The main problem now is to restore building and infrastructure and to establish supplies of necessary materials. Our resources are limited and we’ll need public support," the lawmaker said.

Darvish said that since the beginning of the Syrian Army’s operation in Aleppo, the local authorities have recruited maximum efforts to keep the situation under control, especially concerning the issue of refugees.

"Aleppo now needs all kinds of help. We’re entering the difficult period of rebuilding the city. We hope that the government, people, businessmen and Syrians living abroad will come to help. We also expect to receive assistance from our allies, first of all Russia and Iran," he said.

Commenting on the security situation in Aleppo, Darvish said that the eastern part of the city if now safe, except for a small area where the army is fighting the rest of the militants.