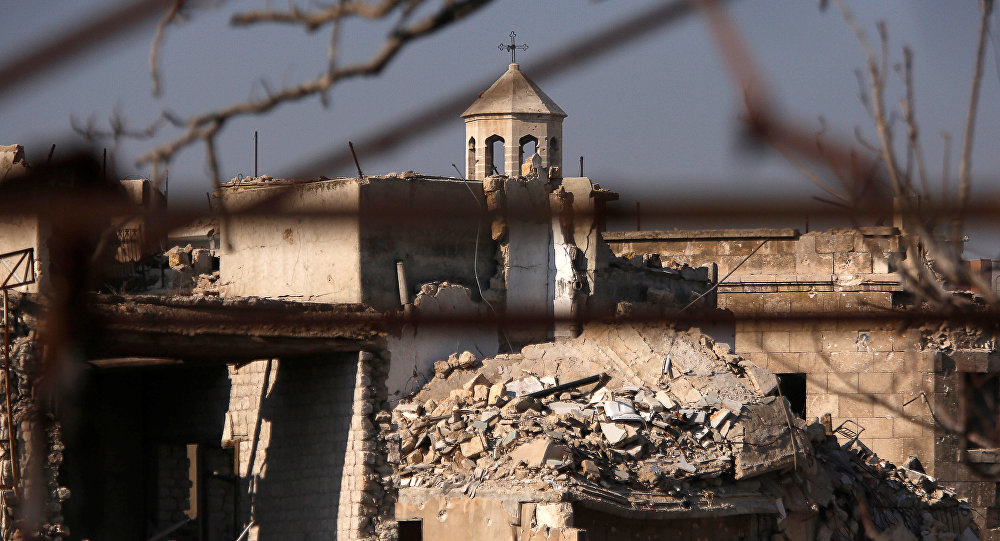 President Obama has issued a memo waiving restrictions on the provision of military equipment to rebel groups in Syria. Speaking to Radio Sputnik, Ron Paul Institute for Peace and Prosperity director Daniel McAdams slammed Obama for trying to reignite the war, just as things are starting to look up for the establishment of a lasting peace.

Obama's memo, issued Thursday to the Departments of State and Defense, waived earlier legal restrictions on the provision of military aid to the rebels, and instructed officials to seek Congressional approval to proceed with providing official US support to Syria-based militants, ostensibly for the purpose of 'facilitating US anti-terrorist operations' in the country.

© REUTERS / Alaa Al-Faqir
Neocons' Last Hurrah: US Talk of Arms Shipments to Syrian Rebels Comes Too Little, Too Late
The US president's decision has met with a wave of shock and disdain from political commentators, academics and peace activists worldwide. Daniel McAdams, former foreign affairs advisor to ex-US Congressman Ron Paul, is among the critics.

Speaking to Radio Sputnik, McAdams suggested that while Obama's decision did give him a shock, he wasn't entirely surprised, since "Washington doesn't ever seem to be able to turn away even from a very bad foreign policy."

More than anything, McAdams lamented that the US president made his decision just as the war in Syria seemed like it was reaching its end. "When the war looks like it's going to finally be over, here you have Washington ramping up a regime change policy, probably attempting to wrong-foot the incoming president, who has indicated on several occasions that he would like a different policy in Syria," McAdams noted.

The commentator stressed that Obama's memo "has the fingerprints of Susan Rice and Samantha Power, and all of the real hawks inside the Obama administration…all over it. It's the inability to walk back a failed foreign policy – a complete failure in regime change that's accompanied by similar failures in Libya, which is descending into total war as we speak."

© AFP 2019 / Youssef KARWASHAN
Syrians, from various western districts, wait at the Razi bus stop in Aleppo's central Jamiliyeh neighbourhood before taking part in a bus trip through government-held territory between the two sides of the divided city on December 3, 2016 as the pro-government forces seized 60 percent of the former rebel stronghold in east Aleppo

In fact, McAdams noted, "everything they've done, with the exception of Iran and Cuba, where they pursued peace instead of regime change, everything other than that has been a complete failure, and so this is their last stand…"

McAdams pointed out that given the many examples of Western-sourced military equipment ending up in the hands of jihadists, rather than the so-called 'moderate opposition' for whom it was supposedly intended, it's completely irresponsible for the White House to engage in this kind of policy. "You'd think that just one example of it would turn Washington against it. This is something that can pose a threat —they're saying this could include anti-aircraft missiles – any number of things; this could be an enormous threat to civilian aircraft; it's just absolutely reckless and foolhardy."

@FuriousKurd
US Proves It Supports Terrorism by Lifting Ban on Arms Supplies to Syria - Damascus
"We've all seen the pictures (but probably not in the mainstream [media]) of people returning to Aleppo, of people celebrating, celebrating the Christmas season in their Christian churches in Aleppo, where they had been under siege for so long," the commentator recalled. "Just when life has the promise of starting to get back to normal, Washington turns the dial and ramps up the war. It's just so egregious, and so unnecessary."

Asked about Washington's line of reasoning that the weapons are intended for the 'moderate' rebels, McAdams suggested that this is actually "almost a moot point at this point. The US has had an entire year since the agreement in early 2016, [where they promised to] separate the moderates that they support from those that they consider to be extremists or terrorists; they've made absolutely no move to do this."

"And it's becoming increasingly obvious that the reason they have not made that move is because the 'moderates' are mythical creatures – they don't exist there. There's no such thing. If there was such a thing, it would certainly be in Washington's interest to show the world these moderates it's backing. The fact of the matter is that [they] don't exist. They're backtracking anyway; they're saying that 'it's all of our fault that the moderates are now joining the terrorists, because we didn't give them enough weapons. That's just an attempt to cover up the lies that they've told about this war from the beginning."

© AP Photo / Khalid Mohammed
Daesh Terrorists 'Would Have Received US Weapons in Syria if They Had Better PR'
Asked about the best case scenario for US policy in the region, McAdams was adamant that actually, "the absolute best case scenario is for the US to completely pull out of Syria – to drop all interest in what happens in Syria. Syria is a sovereign country; it should make its own decisions; if it decides that it would like more help from Russia, it really is none of our business – certainly according to international law it isn't."

"The best thing for the entire region is for the United States to extricate itself, to allow the Syrians to start rebuilding their country, and just leave them alone- just come home," McAdams concluded.