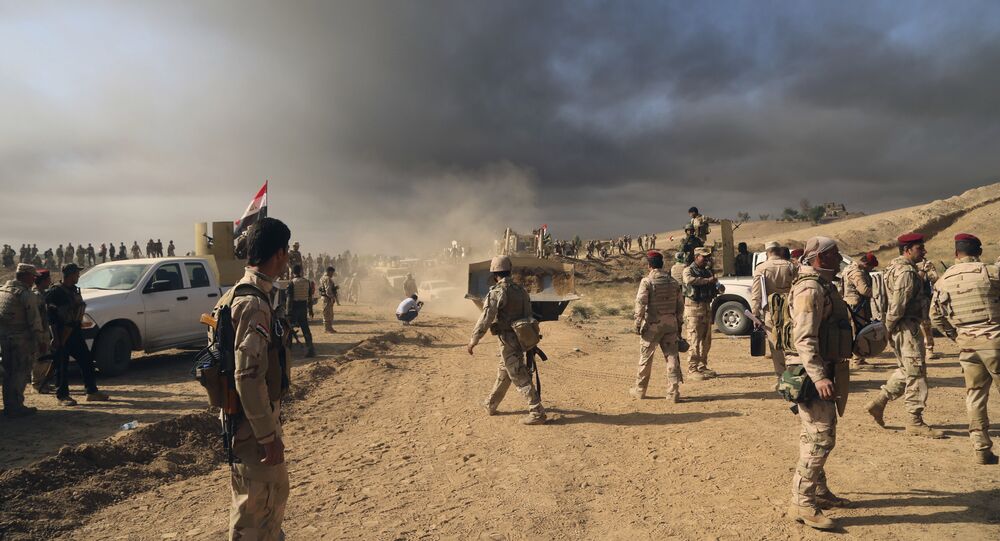 Iraqi Parliament Speaker Salim Jabouri urged the government on Thursday to carry out a thorough investigation into deadly airstrikes in Qaim town near the western border with Syria, controlled by the Daesh militants.

MOSCOW (Sputnik) — The operation in Mosul has been ongoing since October 17. The offensive is led by Kurdish Peshmerga fighters and Iraqi soldiers backed by the US-led anti-terror coalition.

"The speaker holds the government responsible for such mistakes, asking them to open an immediate inquiry to find out the truth of the incident and to guarantee that civilians are not targeted again," a statement released by Jabouri’s office read, as quoted by the Iraqi Press TV news network.

The airstrikes, carried out on Wednesday, targeted "civilian shopping centers, causing the martyrdom and wounding of dozens," Jabouri said, as quoted by the news network. Media reports claimed that airstrikes on Qaim killed about 55 people, including women and children.

© AP Photo / File
Iraq Air Force Drops Leaflets Teasing Liberation Of Mosul From Daesh
The command of the Iraqi armed forces on Thursday on denied reports that it had mistakenly bombed civilian targets in the western town of Qaim, held by Daesh terrorist group.

They noted that the media could not have gained access to credible information on Qaim as the town is under control of Daesh.

The command stressed that the Iraqi Air Force acted in accordance with intelligence data, and stroke only positions of terrorists. The military hoped to eliminate up to 60 foreign fighters.

The attacks come amid the ongoing Iraq operation to liberate Mosul, which was occupied by Daesh (outlawed in Russia) in June 2014. On Wednesday, the Iraqi armed forces and anti-terrorist units launched an offensive against positions of terrorists in several districts of Mosul simultaneously.

Dozens of Civilians Killed in Airstrike on Iraq-Syria Border