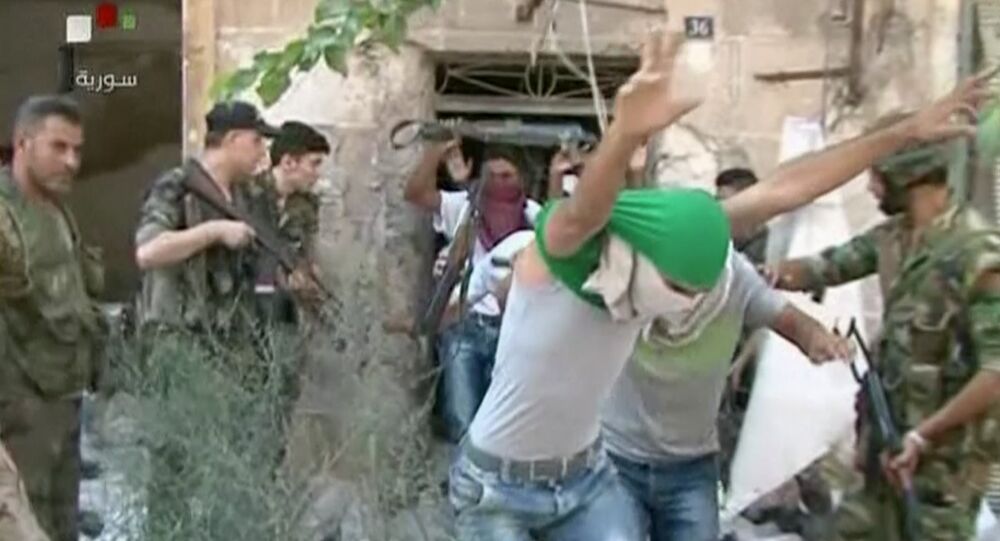 Eastern Aleppo Militants Sending Signals They Are Ready to Surrender

© AFP 2020 / GEORGE OURFALIAN
Eastern Aleppo Militants in Talks With Syrian Army on Terms of Surrender
On Monday Syria's Al-Watan newspaper reported that armed groups occupying eastern Aleppo are in talks with the Syrian army about giving up their weapons and leaving the area, following a series of demoralizing defeats to government forces.

Israel Shamir, an expert in Middle Eastern affairs, told Radio Sputnik that reports from news outlets supporting the militants also give credence to the story.

"Right now in Aleppo there is a kind of situation in which it is very hard to try and predict anything. But there is a feeling that those fighting in east Aleppo have begun to understand that they won't succeed. Over the last two days reports have begun to appear in media outlets which support the rebels, saying 'this is not the end, we are losing Aleppo but it's not that bad, we will fight in other places.' They are kind of consoling messages. This is, in principle, a sign that they are ready to surrender Aleppo," Shamir said.

The analyst warned that although the liberation of Aleppo would represent a major breakthrough, militants who have left Aleppo might reappear in other areas of conflict.

"The militants might go to other conflict areas where they can earn something. In Syria there are still cities held by militants and Aleppo isn't the last city under their control. So, in any case, it's still not the end of the war."

"After all, the process of reconciliation between individual leaders and individual bands of militants is going on at the same time as the war in Aleppo. This process is actively ongoing – already about 1,000 such groups have made peace agreements with the government. And if they can all agree, then that is only for the best. I think that victory in Aleppo, which is not far away, will have an effect on people's minds and supporters of this war will understand that it needs to stop – this war has already gone on too long," he concluded.

On Monday a military source told RIA Novosti that militants are currently controlling about 18 square kilometers in eastern Aleppo, which accounts for about 40 percent of the territory they captured during the 2012 invasion.

Over recent months, Aleppo has become major battleground in Syria, engaging government forces, jihadists, and numerous opposition groups. Eastern Aleppo is currently encircled by government troops, and the fighting has affected thousands of civilians still trapped in the city.

Liberation of Aleppo May Revive Political Process in Syria - Chizhov