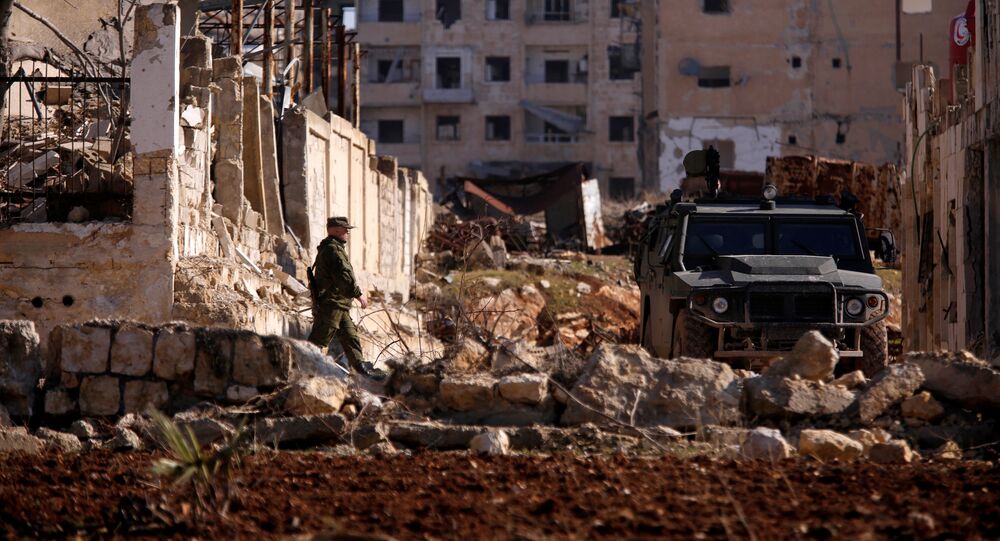 Moscow considers the shelling of a mobile hospital in the northern Syrian city of Aleppo, which left two Russian combat medics dead, to be deliberate murder, Russian officials said Monday, calling on the international community to condemn the attack.

MOSCOW (Sputnik) – Earlier on Monday, the Russian Defense Ministry said that alleged Syrian opposition militants had shelled a Russian military hospital killing a combat medic and injuring two others in Aleppo. One of the injured later also succumbed to her wounds, according to the ministry.

"The Russian female military medic, who was seriously wounded as a result of an artillery attack on a Defense Ministry hospital's admission department in Aleppo by 'opposition' militants, has died of wounds,” Russian Defense Ministry spokesman Maj. Gen. Igor Konashenkov said speaking about the second victim of the shelling.

© Sputnik / Mikhail Alayeddin
Russia Urges All Those Responsible for Aleppo Hospital Shelling to be Held Equally Responsible (VIDEO)
He said Russian and Syrian medics had done all they could to try to save her life.

"But serious wounds turned out to be fatal. Now medics are struggling for the life of their seriously wounded Russian colleague — a children's doctor," Konashenkov said adding that local residents, who came to the hospital, were also wounded.

Konashenkov pointed out that alleged Syrian opposition militants were responsible for the attack.

"Beyond any doubt, militants of the 'opposition' were the one firing. We understand, from whom the militants received accurate data and coordinates of the Russian hospital admission department," he said.

The military official pointed out that the responsibility for killing and wounding medics, who were providing aid to Aleppo children, lied not only on those, who opened fire.

© AP Photo / Syrian State TV, via AP
Eastern Aleppo Militants Sending Signals They Are Ready to Surrender
"The blood of our servicemen is also on the hands of those who ordered the killing … On you, patrons of terrorists from the United States, Great Britain, France and other sympathizing countries," Konashenkov said.

Later he said that said those who shelled the Russian hospital in Aleppo and those who ordered the shelling must be held equally responsible.

Konashenkov also called on the international community to condemn the attack.

The Russian Foreign Ministry issued a statement on the attack, drawing  attention to the lack of condemnation from the Western countries.

"On December 5, as a result of a direct hit of the mortar shell, launched by militants to the admission room of the Russian military mobile hospital deployed in Aleppo Russia's medical servicewoman was killed. Two healthcare workers suffered severe injuries and one of them died later in the day. Local citizens, who have come to visit doctors has also suffered. But we cannot hear condemnations of it from the western capitals," the statement said.

The statement added that Russia called on its partners to "throw away a politicized approach" and to join efforts in Moscow's anti-terror struggle in Syria.

Speaker of the upper house of the Russian parliament Valentina Matvienko said that human rights organizations expressed deep concern about human rights violations in Syria but did not support their words with actions.

© Sputnik / Mikhail Alayeddin
Terrorists' Western Partners' 'Hands Are Coated With Blood' of Russian Medics in Syria - MoD (PHOTOS)
“Our foreign partners in some cases do not stop shouting about human rights violations, but in other similar cases ignore suffering and death of thousands of people. This is clearly visible at the example of Syria. They combine loud whining about misfortunes of the refugees with total non-involvement in the delivery of humanitarian aid to the suffering people,” the official said.

Member of the Federation Councils' Foreign Affairs Committee Igor Morozov said that the upper chamber was ready to call on members of foreign states' parliaments to condemn the intentional murders of Russian military medical personnel.

"If needed, if there is no reaction from the international community, the Federation Council will join [the Russian government] in the call to condemn this atrocity," Morozov said.