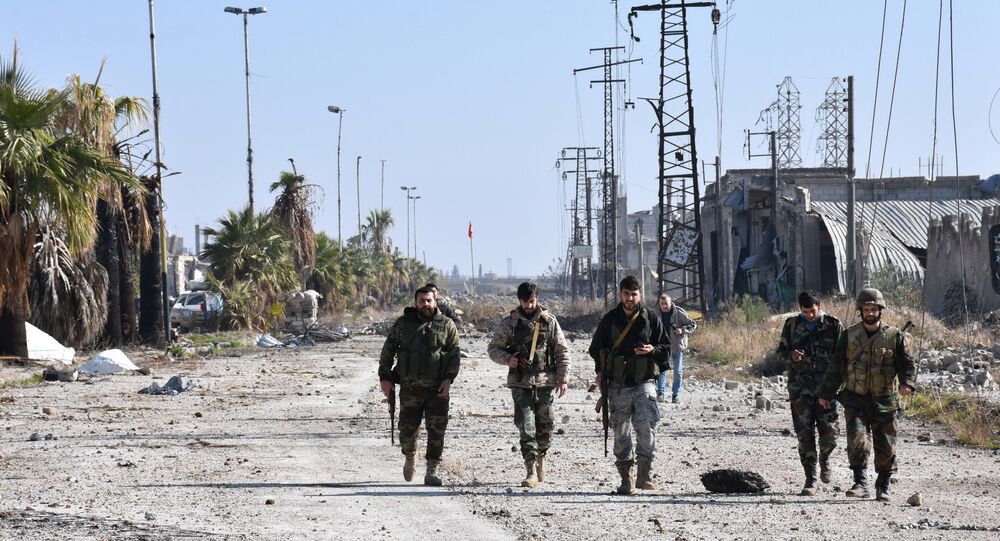 Syrian army, aided by local militia force, managed to liberate about half of eastern Aleppo during last two weeks.

© AFP 2020 / George OURFALIAN
Good Riddance: Aleppo Could Be Terrorist Free Zone 'By New Year'
However, as government forces continue to advance into the city, it remains unclear how much time do they have to complete their objective as it appears that some Western governments are less than pleased by the ongoing liberation of Aleppo.

As government forces keep pushing forward into the city, militants belonging to the Jabhat Fatah al-Sham (formerly known as the Nusra Front) continue to offer fierce resistance. Furthermore, as signs of bickering and even infighting among the terrorists entrenched in the city begin to emerge, it appears that some of the terrorist groups actively attempt to prevent civilians from fleeing the dangerous areas, political analyst Ali Ahmad told RIA Novosti.

"There are militants who wish to lay down their arms, but al-Nusra and Islamist radicals prevent them from doing so. Not just civilians, but armed militants are afraid of the radicals. These 10 percent of radicals control the situation, which is why the militants conflict with each other," he said.

Ahmad warned that despite the fact that the terrorists have taken heavy losses, they still have enough manpower to continue the fighting, and that while the government forces managed to liberate half of eastern Aleppo, taking the other half will not be easy.

He also remarked that UN and leaders of the US and other Western nations so far have not made any offers of aid to the tens of thousands of liberated Aleppo civilians; while Russian and Syrian forces deliver humanitarian aid to the city residents on a daily basis, UN representatives claim they can’t deliver any supplies until the safety of their convoys can be assured.

"None of the Western representatives said anything about helping those 90,000 liberated civilians who require aid. I should point out that Syria, Russia and their allies don’t need Western help, but West could’ve at least offered a few kind words. They speak of humanity but pursue quite different goals," Ahmad said.

Meanwhile, Dr. George Masse of the American University of Science and Technology in Beirut warned that the US is unlikely to give the Russian and Syrian forces enough time to secure victory in Aleppo, and that the election of Donald Trump as the president of the United States is unlikely to affect the US policy in the region.

"It’s clear that the US won’t give Russians enough time to achieve victory, because a victory in Aleppo practically means a victory in Syria," he said.

According to Masse, the US will continue to insist on more humanitarian pauses while at the same time supplying the militants with more weapons.

"They’re also likely to begin insisting on establishing a no-fly zone over Aleppo. Basically, they’ll be doing everything they can to stop Russia from winning in Aleppo," he surmised.