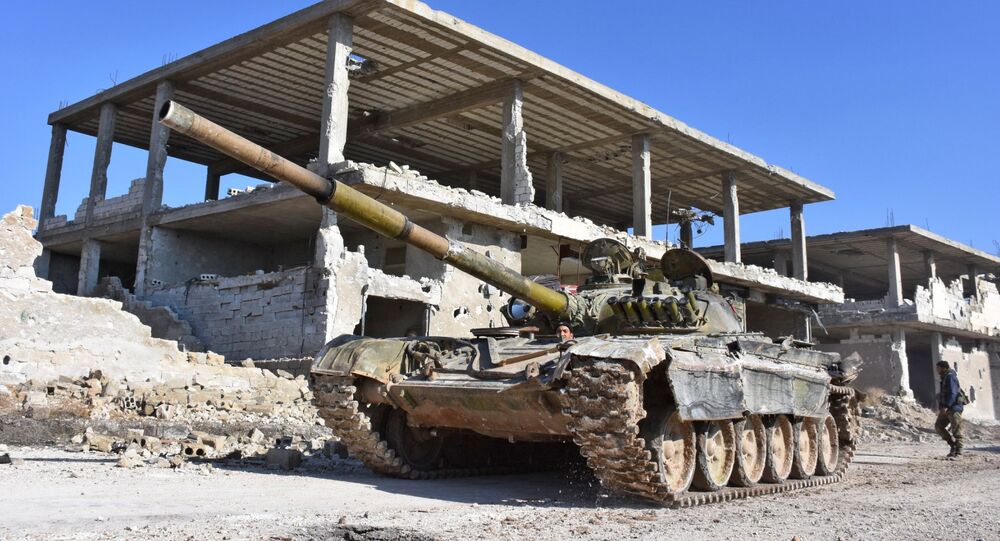 The current Syrian Army offensive against terrorists in eastern Aleppo will stop jihadists from holding this part of the city for a long time, Syrian political analyst Anas Mohsen told RIA Novosti.

© REUTERS / SANA
This is What's Behind Turning Point in Fight for Syria's Aleppo
Late last month, the Russian Center for Syrian Reconciliation said that after long months under control of jihadists, a populated area with 90,000 residents in eastern Aleppo has been completely liberated by the Syrian Army.

According to Syrian Army spokesman Brigadier General Samir, the military has regained control of 45 to 50 percent of eastern Aleppo, as government forces continue to advance in the besieged city.

"Given the current pace of the army's advance in the eastern neighborhoods of Aleppo, I do not think that the radicals will be able to take control over this part of the city for a long time," Mohsen told RIA Novosti.

© AFP 2020 / George OURFALIAN
Syrian pro-government forces gather in the Myessar district in east Aleppo in an ongoing operation to recapture all of the battered second city, on December 4, 2016

Commenting on the current situation in Aleppo, he specifically stressed the importance of a full-fledged liberation of this city located in northern Syria.

"The liberation of Aleppo will enable the Syrian Army to further move to Al-Bab near the border with Turkey and Idlib, where the main forces of the armed opposition are based," he said.

Moshen stressed that "what the Syrian Army and the militia have achieved in Aleppo over the past two weeks are perhaps the most successful events in the campaign to fight terrorism in recent years."

He was echoed by Colonel General Leonid Ivashov, head of the Moscow-based Academy of Geopolitical Problems, who suggested that a number of factors indicate that Aleppo will be fully liberated from the terrorists before the end of December.

Speaking to RIA Novosti, he said that the terrorists' defensive lines have crumbled, mercenaries from other countries are retreating and the armed Syrian opposition will soon start to surrender.

"So it is safe to assume that Aleppo may be completely liberated from the terrorists by New Year, in what will be followed by activities related to the reconstruction of the city and, above all, its vital social spheres," Ivashov said.

280 tonnes of humanitarian aid were delivered by the Russian convoy to the residents of Aleppo. pic.twitter.com/z9s5lS6IdO

Heaping praise on the Syrian Army's professionalism, he pointed out that the liberation of Aleppo will signal a turning point in the entire Syrian campaign to fight terrorists.

© AP Photo / Manu Brabo, File
What's Next? US, EU Have Neither Strategy nor Vision for the Future of Syria
Over recent months, Aleppo has been a major battleground in Syria, engaging government forces, jihadists, and numerous opposition groups. Eastern Aleppo is held by the jihadists, encircled by government forces, and the fighting has affected thousands of civilians still trapped in the city.

Between 200,000 and 300,000 civilians are still held by the terrorists in the eastern neighborhoods of Aleppo, according to Under-Secretary-General for Humanitarian Affairs and United Nations Emergency Relief Coordinator Stephen O'Brien.

Total of 10 Militants Leave Eastern Aleppo in Past 24 Hours