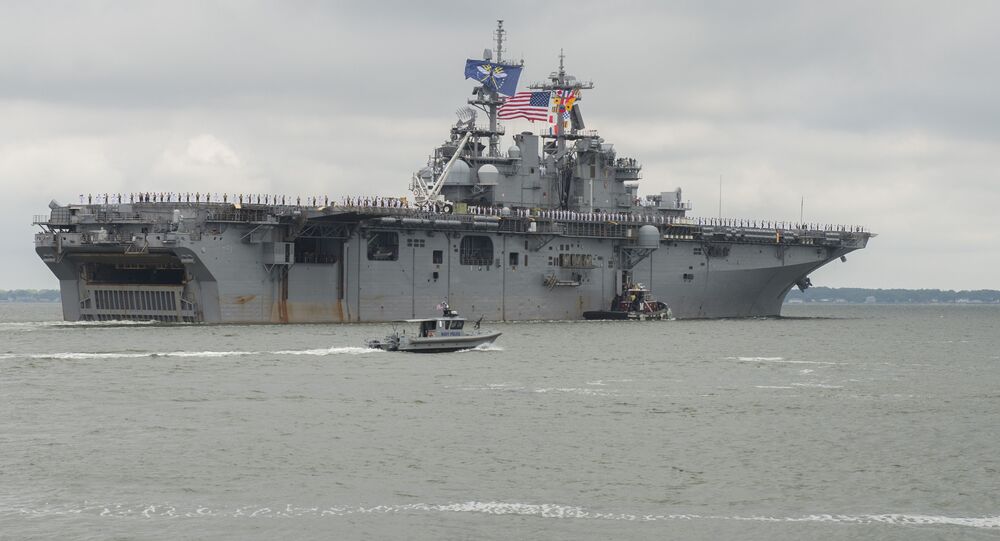 US Assault Ships in Mediterranean Might Mean Soon Ground Operation

Commenting on the recent deployment of two US assault ships into the Mediterranean, Russian defense analyst Konstantin Sivkov has connected it with the success of the Syrian army in Aleppo and the absence of any significant progress in the US operation in Iraq's Mosul.

On Thursday, the US Navy released a statement saying that "amphibious assault ship USS Wasp (LHD 1) and amphibious dock landing ship USS Whidbey Island (LSD 41) with embarked Marines from the 22nd Marine Expeditionary Unit (MEU) transited the Suez Canal and entered the US 6th Fleet area of operations", which is the Mediterranean.

"Travelling through the canal and into the Mediterranean Sea marked a significant milestone for the 4,000 Sailors and Marines of the Wasp Amphibious Ready Group (ARG) as they enter the final stages of their six-month deployment," the statement reads.

"After completing our time in 5th Fleet, the Wasp ARG will now be supporting the maritime security mission in the Mediterranean Sea. This sea lane is vital to our global economy, and it remains secure because of the strong relationships between the navies that operate together here," according to the statement by Commander of Wasp ARG, Capt. F. Byron Ogden.

© REUTERS / Ismail Zitouny
Two US Amphibious Assault Ships Deploy in Mediterranean to Back Libya in Daesh Battle - Navy
Commenting on the re-deployment of the US assault ships, Russian defense analyst, President of the Academy of Geopolitical Problems Konstantin Sivkov told Radio Sputnik that it might be connected with the recent success of the Syrian army in Aleppo and, conversely, with the lack of any progress in the US' operation in Iraqi Mosul.

The US might be nurturing plans to enforce its military presence in Iraq, he further suggested.

"In a normal situation, such a re-deployment is nothing unusual," he told Sputnik.

"American assault ships are present in the Mediterranean as part of the US 6th Fleet on a regular basis. But the situation is now critical for the US, hence the re-deployment of the US assault ships is symbolic and indicates that the US is nurturing plans for a ground operation in the region," he said.

The defense analyst further noted that the US has already deployed two brigades of its airborne forces and one Marine Expeditionary Unit to retake Mosul, thus the re-deployment of its two assault ships in the eastern Mediterranean might indicate that Washington might be considering a ground operation.

© AFP 2021 / George OURFALIAN
Syrian Army Success in Aleppo Vividly Indicates the End of 'Triumph of the West'
"The situation in the western part of Syria is not developing in the favor of the US," he said.

"Aleppo is being finally liberated by the Syrian army, which means that the militants the US bet on as a possible alternative to President Bashar Assad will soon be defeated. However for the US, their defeat in Aleppo would be catastrophic as they will lose the tip of the military spear and won't any longer be able exercise any real political influence on the ongoing processes in Syria," Sivkov explained.

The possibility of losing control over western Syria is even worse given the lack of any success in the operation to retake Mosul, he said, Thus the US might has decided to enforce it ground troops in Iraq.

It might also nurture plans for a joint operation with the Turkish military forces in Syria, he further suggested.

"The Turkish military are already operating in Syria. The Americans might now join them," he finally suggested.

What's Next? US, EU Have Neither Strategy nor Vision for the Future of Syria