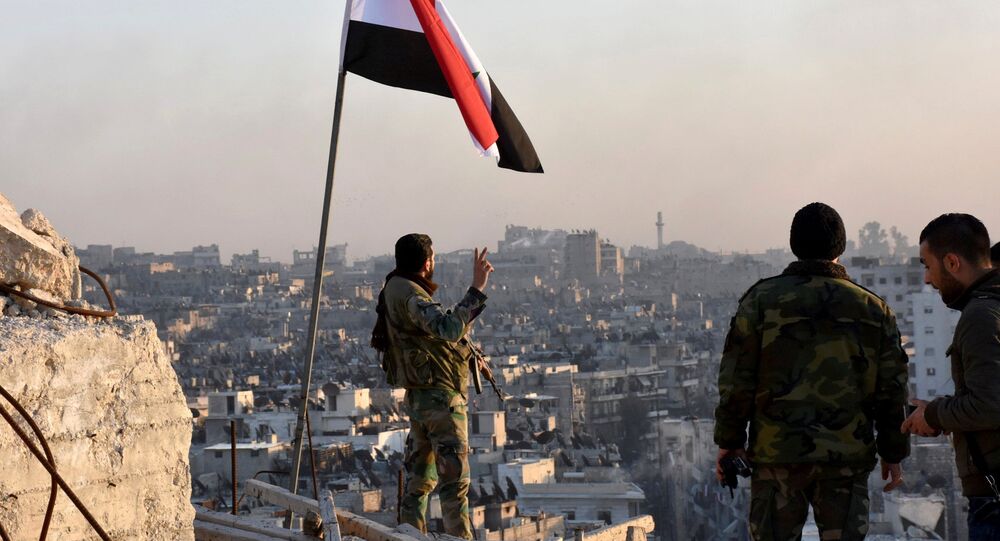 The turning point in the fight for Aleppo is down to the high morale of the Syrian Army and the ability of its commanders, according to Igor Korotchenko, chief editor of the Russian magazine National Defense.

© AFP 2021 / GEORGE OURFALIAN
In Aleppo, 'Russo-Syrian Alliance Has the Upper Hand, Will End Up Victorious'
In an interview with RIA Novosti, Igor Korotchenko, chief editor of the Russian magazine National Defense, attributed the turning point in the fight for Aleppo to the high morale of the Syrian Army and how well its commanders have been peforming in the field.

The interview came after the Russian Center for Syrian Reconciliation said that after long months under control of jihadists, a populated area with 90,000 residents in eastern Aleppo was completely liberated by the Syrian Army.

507 terrorists have already left Aleppo and laid down arms, the Center said, adding that 484 fighters among local residents have been immediately granted amnesty.

"A turning point in the fight for Aleppo reflects the growing superiority of the Syrian government troops over the enemy, Korotchenko said referring to a spate of terrorist organizations, including Daesh (ISIL/ISIS) and the al-Nusra Front.

"This is ensured by the high morale of the army of [Syrian President] Bashar Assad, the skillful tactics of urban fighting and increased ability of the Syrian Amy commanders," Korotchenko pointed out.

In addition, the terrorists are facing growing resistance from the local population who ceased providing them with any kind of help at all, he said adding that locals are unwilling to act as human shields for the jihadists.

© Sputnik
Modern Day Knights: Who Are the Soldiers Fighting Terrorists in Aleppo (PHOTOS)
Korotchenko specifically drew attention to the fact that a turning point in the fight for Aleppo came amid the absence of air support for the Syrian Army, in line with the current moratorium on Russian and Syrian airstrikes in the 10-kilometre (6.2 miles) radius around Aleppo.

He also noted that the jihadists can no longer effectively use their military supply lines which have been blocked by the Syrian government forces.

"All this paves the way for a full-fledged liberation of eastern Aleppo from the terrorists, which in turn will contribute to a large-scale political dialogue between the government of Bashar Assad and the moderate Syrian opposition," Korotchenko said.

He also stressed the importance of reaching a consensus on Syria between Russia and the new US Administration in order to separate the moderate opposition groups from the terrorists, as well as coordinate efforts by a Russian Air Force group and the US-led coalition in Syria.

Civilians who escaped the terrorists in East #Aleppo celebrate their freedom by cheering & welcoming the Syrian soldiers who liberated them. pic.twitter.com/8utMA519Vd

Meanwhile, Russian Foreign Minister Sergei Lavrov said that US Secretary of State John Kerry had finally made proposals on how to move forward on the crisis in Syria's stricken city of Aleppo that seem acceptable to Russia.

"Yesterday during our meeting in Rome, John Kerry turned in American proposals in line with proposals defended for a long time by our experts," Lavrov told reporters after he was asked if there was any progress with Washington on dissociation of the terrorists and moderate opposition in Syria.

© AFP 2021 / GEORGE OURFALIAN
'It's Time to Strike Back': Russia, Iran to Debunk West's Media Lies Over Aleppo Operation
Over recent months, Aleppo has been a major battleground in Syria, engaging government forces, jihadists, and numerous opposition groups.Eastern Aleppo is held by militants, encircled by government forces, and the fighting has affected thousands of civilians still trapped in the city.

Between 200,000 and 300,000 civilians are still held by terrorists in the eastern neighborhoods of Aleppo, according to Under-Secretary-General for Humanitarian Affairs and United Nations Emergency Relief Coordinator Stephen O'Brien.

Russian MoD: UK Not Providing Aid to Aleppo, Must Refrain From Sabotaging Help