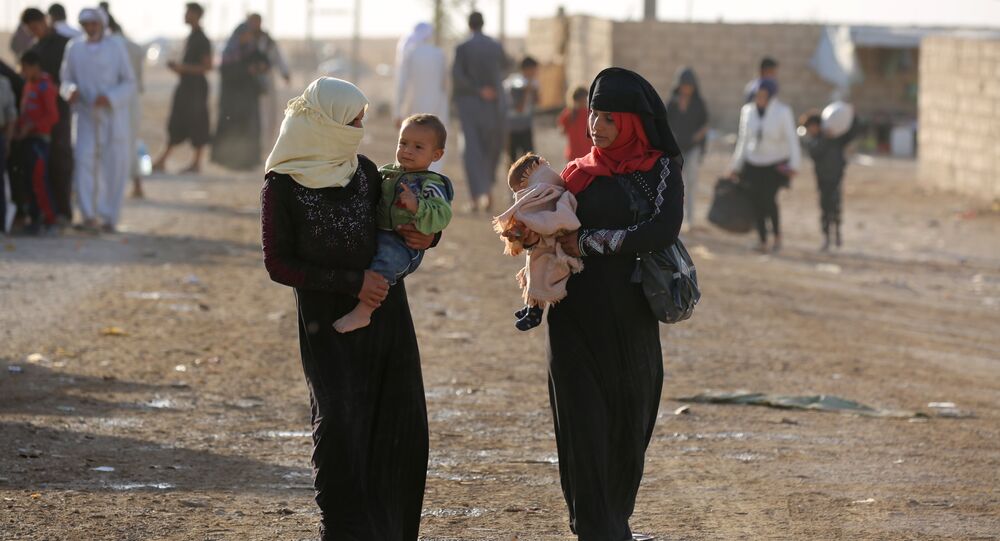 © REUTERS / Alkis Konstantinidis
Fearing ‘They Would Die From Hunger’ Syrian Refugees Flee Baltic Countries
In order to leave Daesh-held areas of Iraq, Iraqis living at the Al-Hol refugee camp, in the west of Syria's Al-Hasakah governorate, were forced to pay between $500 and $1,000 to the terrorist group, they told Sputnik Arabic.

Approximately 9,000 Iraqis are currently living at the camp, and since the operation to liberate Mosul began in October, the UN Refugee Agency, the Kurdish Red Crescent and other public and charitable organizations have begun to bring fuel, gas, blankets and winter clothes, refugee camp representative Birifan Husein told Sputnik Arabic.

The camp's directors are planning to expand the camp to a capacity of 50,000 and then 100,000 refugees. The camp is to be provided with medicine, medical care and the necessary sanitary facilities. Children should receive the possibility to get education, play sports and leisure activities, Husein added.

Refugees told Sputnik that after paying Daesh large sums of money, they had to walk tens of kilometers to reach safety. They asked responsible organizations to help accommodate refugees who don't have a place there, many of whom managed to escape from territory under the control of Daesh, but remain without shelter.

"I am from the Sinjar region. Explosions could be heard there for about three days. We had to walk 20km, it took us six days to get here. We're very tired," said one refugee.

"We have been received well here, there are military and medical personnel, the UN, everything we needed. We came by car … we want to go back," said another.

"At the start there was no organization here to help us, there were just a few charities, they helped us a bit. Since the beginning of the operation to liberate Mosul they started helping more and more. Now it's winter and more than anything now we need fuel, stoves and winter clothing. There aren't enough doctors and medicine. The Kurdish Red Crescent is helping us, but they are limited in what they can do," said one woman.

Over six weeks ago Iraqi government forces, with the support of the US-led coalition and paramilitary groups including the Shiite Popular Mobilization Units and Kurdish Peshmerga, launched an offensive to liberate Mosul from the Daesh terror group.

Since then an estimated 78,000 individuals have been displaced as a result of the ongoing operation.

© REUTERS / Alaa Al-Marjani
US-Led Anti-Daesh Coalition Envoy McGurk Arrives in Iraq for Consultations on Mosul Offensive
On Thursday the United Nations Assistance Mission for Iraq (UNAMI) announced that at least 2,885 Iraqis were killed and another 1,380 were injured in acts of terrorism, violence and armed conflict in Iraq in November 2016. The real figure is believed to be much higher, because of the difficulty in effectively  verifying casualties in conflict areas.

"The casualty figures are staggering, with civilians accounting for a significant number of the victims,” Special Representative of the United Nations Secretary-General for Iraq (SRSG) Jan Kubis said.

"In its desperate attempt to cling on to territory it controls in Mosul and Ninewa areas Daesh has been employing the most vicious tactics, using civilian homes as firing positions as well as abducting and forcibly moving civilians, effectively using them as human shields," Kubis explained.