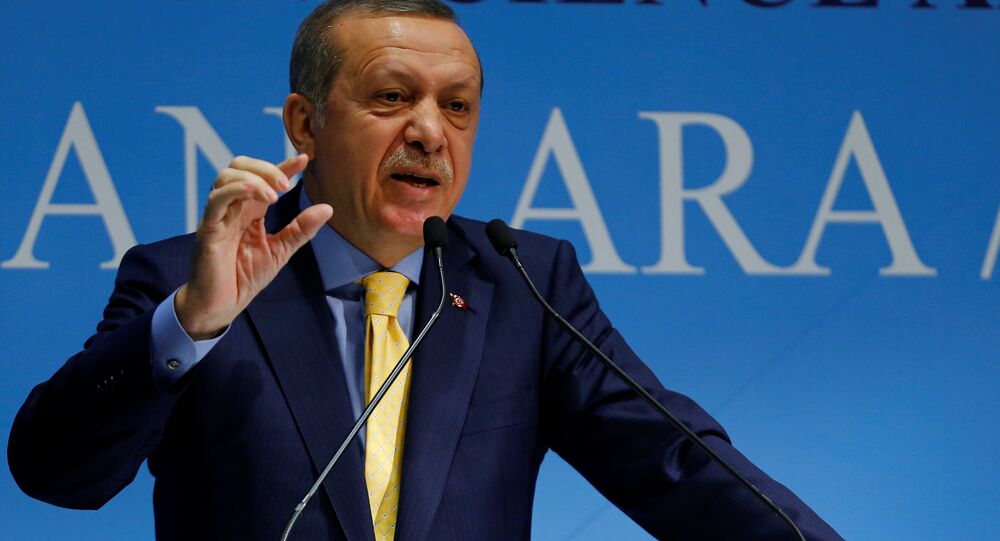 © AFP 2021 / ADEM ALTAN
A Slip of Tongue or Deliberate Plan? True Motives Behind Erdogan's Remark About Toppling Assad
MOSCOW (Sputnik) — On Tuesday, Erdogan said at a symposium in Istanbul that the Turkish armed forces' military operation in Syria was designed to put an end to the rule of Assad. He said that the high death toll in the war-torn country forced Turkish forces to enter Syria jointly with the FSA.

"When he says that the Free Syrian Army is designed to do this, it means that this army is a tool in the hands of Erdogan and he can do whatever he wants with this army. He just admitted that it is his tool," Krydee said.

The representative added that Erdogan should not meddle into the Syrian internal affairs.

"The Syrian people chose their president, and they will choose president in future by using democratic tools, elections," Krydee said.

On August 24, Turkish forces, backed by US-led coalition aircraft, began a military operation dubbed the Euphrates Shield to clear the Syrian border town of Jarabulus and the surrounding area of Daesh. As Jarabulus was recaptured, the joint forces of Ankara, the coalition and Syrian opposition groups continued the offensive southwest.

The FSA is one of the groups labeled a "moderate" opposition faction in the Syrian civil war, which broke out in 2011. Washington trained and equipped the FSA fighters in the hope that they would counter IS terrorists, but subsequently shut down this program in October 2015 after spending almost $500 million dollars without any tangible results.