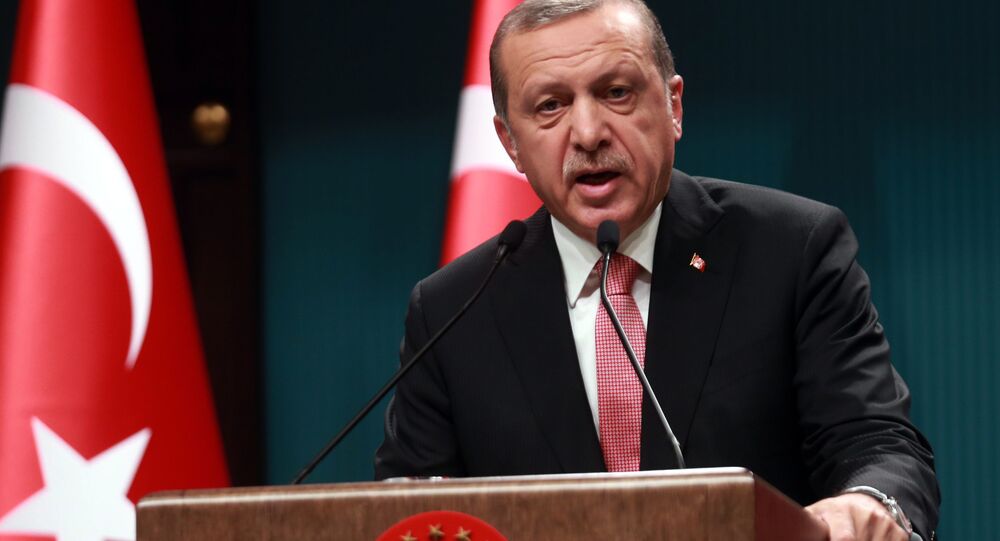 Earlier this week, Turkish President Recep Tayyip Erdogan said that the Turkish military operation in Syria is aimed at putting an end to the rule of Syrian leader Bashar Assad. Political analyst Alexander Vavilov told Radio Sputnik that Erdogan is likely to have a geopolitical bargaining with Russia and Iran over Syria.

© REUTERS / Stringer
Turkey to Continue Cooperation with Russia in Fight Against Daesh - FM
"We entered [Syria] to end the rule of the tyrant al-Assad who terrorizes with state terror. [We didn’t enter] for any other reason," Erdogan said at the first Inter-Parliamentary Jerusalem Platform Symposium in Istanbul.

"Why did we enter? We do not have an eye on Syrian soil. The issue is to provide lands to their real owners. That is to say we are there for the establishment of justice," the Turkish president added.

On August 24, Turkish forces, backed by United States-led coalition aircraft, began a military operation dubbed the Euphrates Shield to clear the Syrian border town of Jarabulus and the surrounding area of Daesh. As Jarabulus was recaptured, the joint forces of Ankara, the coalition and Syrian opposition groups continued the offensive southwest.

© Sputnik / Sergey Guneev
Erdogan Explains Anti-Assad Remark to Putin - Russian Presidential Aide
Earlier, Erdogan said that the goal of the operation was to librate a 5,000-square-kilometer area from terrorists and establish a safe zone for refugees in the region.

With this statement, Erdogan revealed the true goal of Turkey’s offensive in Syria, said Alexander Vavilov, a professor at the Diplomatic Academy of the Russian Foreign Ministry.

"I think that Erdogan let it slip. In fact, he revealed the actual motives behind Turkey’s intensified efforts against Daesh in Syria. As the proverb runs, better the foot slip than the tongue. And his words have ground. When Operation Euphrates Shield began the main goal was to weaken Kurds. But Turkey also hinted that it wanted to weaken Assad’s regime," Vavilov told Radio Sputnik.

According to the expert, Erdogan understands that such statement risks deepening tensions with Moscow and Tehran. He suggested that in fact Erdogan wants to have a political bargaining with Russia and Iran over Syria and the future situation in the Middle East.

"This cannot be ruled out. The crisis will not stop when Aleppo is liberated. So, Erdogan wants to be involved. As an argument, Ankara says it helps Syrian refugees. Turkey is likely to make attempts to gain trump cards in the future geopolitical game," Vavilov pointed out.

Meanwhile, Hasan Otkay, director of the Turkish center for strategic studies Kafkassam, suggested that Erdogan could have made his hostile statement about Assad "by mistake."

© Sputnik / Press-service of Syrian President Bashar al-Assad
Erdogan's Remark About Toppling Assad Prompts Syrian, Russian Reaction
"Unfortunately, politicians sometimes make mistakes depending on their emotional condition or on what their speechwriters do. After a Turkish jet shot down a Russian jet in Syria last year, Erdogan made several harsh statements written by his assistants. Later, it turned out that those assistants were against the Turkish government. Then Erdogan’s rhetoric totally changed. I think that he will try to fix the situation after his words about Assad. Turkey is unlikely to dramatically change its policy in Syria," Oktay told RIA Novosti.

According to the expert, lately Erdogan has been exhausted because of domestic problems and souring ties with the US and the European Union.
He also noted that in Istanbul Erdogan was speaking before representatives of Arab countries.

"Turkey is now in an economic crisis. With his anti-Assad statement, Erdogan may have tried to show respect for the interests of Arab nations, in a bit to attract Arab investments to Turkey," Oktay assumed.

Political analyst and specialist in Middle East studies Mais Kurbanov argued that Erdogan’s position towards Assad in coordinated with the West.

"Erdogan made his statement right at the time when Moscow and Damascus is defeating terrorists in Syria. Turkey wants to end a crisis in its relations with the West. Erdogan says what his old friends from the West want him to say. The West and Ankara wants to prevent a Russian victory in Syria," Kurbanov told Radio Sputnik.