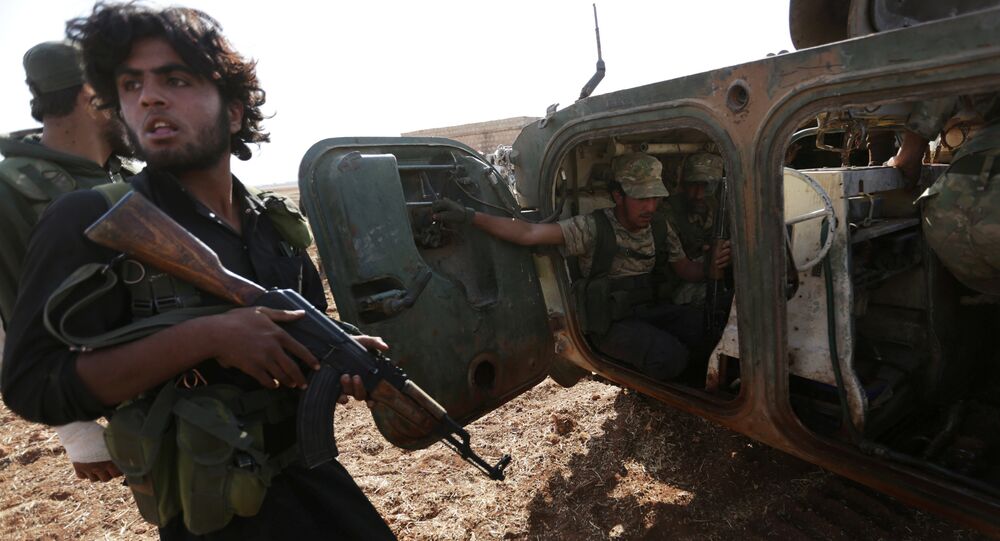 The clashes between the Free Syrian Army (FSA) forces and the Syrian Democratic Forces (SDF) in northern Syria are becoming more violent with each passing day.

© AFP 2020 / AMER ALMOHIBANY
Not So Innocent After All: 'Black Deeds' of 'White Helmets' in Syria
The two factions continue to battle with each other in the vicinity of the Syrian cities of Al Bab and Manbij as both sides attempt to hinder each other’s progress in the region, according to Sputnik Türkiye.

And as Turkish artillery and warplanes pound the SDF positions, the military council of Manbij now considers seeking help from the Kurdish YPG defense forces.
Zekeriya Abdulmecit, a representative of the Revolutionary Army group which belongs to the SDF coalition, told Sputnik that Turkish and FSA forces

"The territories that we liberate from Daesh (ISIL/ISIS) are being attacked by the FSA and Turkish forces. They launch strikes against our positions to halt our advance, and we hit them back. Our goal is to fight against Daesh, but we also retaliate against anyone who attacks us," Abdulmecit said.

He also added that while SDF seeks to drive Daesh from the region so that displaced citizens could return to their homes, but the attacks carried out by FSA and Turkish forces effectively hamper these efforts.

"Turkey seeks to occupy these territories, to spread its influence and its culture across the northern Syria. For example, they already use Turkish language when teaching students in Jarabulus schools," Abdulmecit ruefully remarked.

Turkey has been conducting the Euphrates Shield military operation in northern Syria since August 24. The declared goal of the operation is combating the Daesh. However, many experts and commentators argue that Ankara also targets Kurds in an attempt to prevent the creation of a Kurdish autonomy in northern Syria.