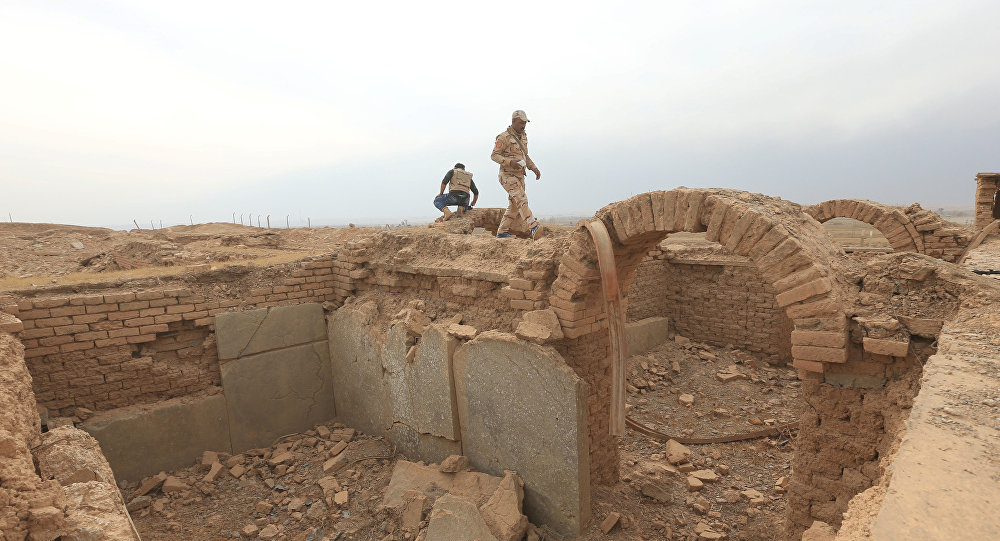 In recent days Iraqi Forces have captured villages surrounding the ancient Nimrud city. The troops pushed from Mosul’s south against Daesh and retook two villages on the outskirts of the ancient city. RIA correspondent, Rafael Daminov, visited the ruins of Nimrud and spoke with several local people.

Nimrud was once the capital of an empire stretching across the ancient Middle East. It is one of several historic sites looted and raided by Daesh fighters, who consider the country's pre-Islamic religious heritage as idolatrous.

Earlier reports said that the entire 3,000-year-old Assyrian city of Nimrud which is about 30 km south of Mosul had been captured by the army.

RIA correspondent Rafael Daminov together with a team of Russian journalists paid a visit to Nimrud to make a report and take photographs but when they were just 300 meters away from the ancient city, the road was blocked by a lieutenant colonel of the Iraqi Army.

© AFP 2019 / SAFIN HAMED
A picture taken on November 15, 2016, shows destruction caused by the Islamic State (IS) group at the archaeological site of Nimrud, some 30 kilometres south of Mosul in the Nineveh province, a few days after Iraqi forces retook the ancient city from IS jihadists.

He told the team that filming or taking photographs of the ancient city was prohibited and that they should come back later when permission had been granted.

Prior to that, it took the team two days to coordinate a trip with Iraqi generals and Kurdish Peshmerga. The journey passed through a number of checkpoints and via a road which was recently liberated from the terrorists.

As Daminov said, by the time the phone calls were made and permission to visit was granted, the sun had set and it was impossible to take photographs of Nimrud so they had to stay the night and try again the next day.

“The Colonel cordially invited us to spend the night at his headquarters. The military platoon of the Iraqi Ninth Armored Division was staying in a building of the former commander of Daesh. We watched TV, smoked shisha, played backgammon, ate meat with potatoes and had delicious tea,” Daminov said, recalling the hospitality of the Iraqi Army to the Russian journalists.

Archaeologists from around the world have yet to visit Nimrud in order to evaluate the damage done to its ancient architecture.

So far, only the army had been there to liberate it from Daesh and a number of journalists. Nonetheless, the once famous ruins of the ancient capital of Assyrian civilization has been completely demolished and turned to rubble.

The imam of a local mosque, Sheikh Abdullah, agreed to be a guide to Daminov and his team and took them to see the ruins of Nimrud up close the next day.

© AFP 2019 / AHMAD AL-RUBAYE
Artifacts of Evil: Iraqis Discover Terrorists' Abandoned Makeshift Weapons Plant
The city which was founded in the XIII century BC was destroyed by Daesh terrorists almost immediately after they captured the city of Mosul in 2014.

The huge palace complex of king Ashurnasirpal II was blown up by the fanatics for whom such historical monuments are simply idols that must be destroyed.

Under the precious bas-reliefs, stone sculptures and arches the militants placed more than 20 tons of explosives. They filmed the whole process.

“It felt like a nuclear blast went off. Pieces of stone flew as far as the neighboring villages. Our village was completely buried under the boulders,” Saad, a resident of the village of Nimrud situated at the foot of the ancient complex told RIA correspondent.

Everything else that the terrorists could not destroy with the blast they destroyed using drills, hammers and bulldozers.

However, even after such a wide-scale demolition, some fragments of the royal palace are still preserved.

“At the facade of the entrance into the palace, anthropomorphic god Nabu of the Assyrians stands on a pillar surrounded by a pile of stones which are the remains of another ancient god Nergal, a lion with a human face,” the correspondent said. 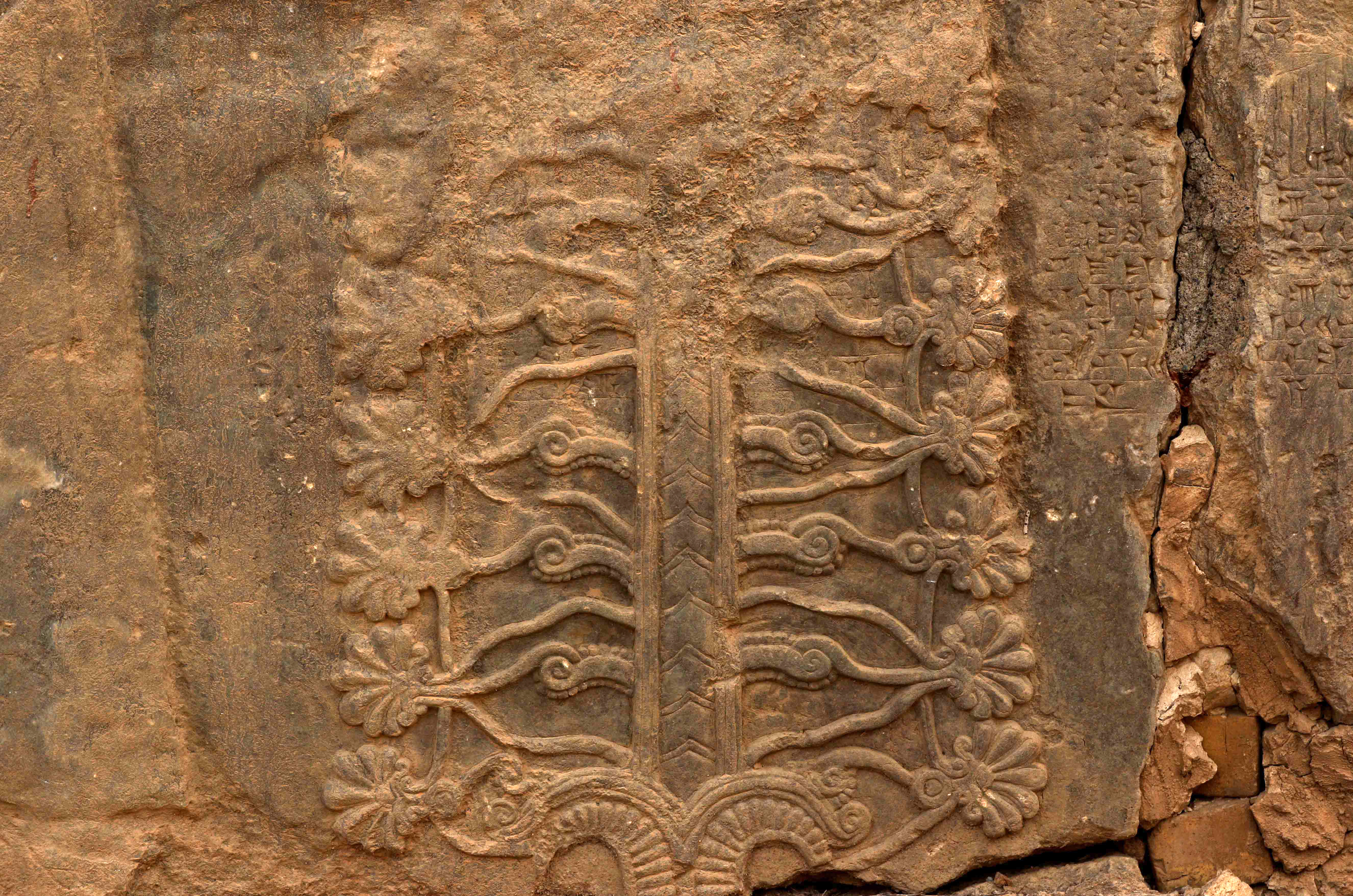 © AFP 2019 / SAFIN HAMED
A picture taken on November 15, 2016, shows destruction caused by the Islamic State (IS) group at the archaeological site of Nimrud, some 30 kilometres south of Mosul in the Nineveh province, a few days after Iraqi forces retook the ancient city from IS jihadists.

“When Daesh was destroying everything here, above there were drones flying. So the Americans saw what was happening. Why they did not stop it?” the Imam asked indignantly.

The imam further said that Daesh brought in bulldozers and drove them all over the ancient monuments.

Near Nimrud there is a hill on top of which there was an ancient ziggurat, which had been a stepped temple of the Assyrians. Daesh ran bulldozers until the hill on which the temple was situated was reduced by 30 meters. The ancient temple now lies in ruins.

© AP Photo / Hussein Malla
A part of carved stone slabs which were destroyed by the Islamic State militants, is seen at the ancient site of Nimrud some 19 miles (30 kilometers) southeast of Mosul, Iraq, Wednesday, Nov. 16, 2016.

The recent operation to seize control of Mosul has been ongoing for more than a month now.

Archeological sites in the historic Assyrian city of Nimrud have been exposed to collective destruction by Daesh since the radical group took over the area in June 2014. At the time, UNESCO warned of a “culture cleansing” by Daesh.

Backed by air cover from the US-led coalition, Iraqi forces recently took control of major towns in Mosul’s countryside, as well as recaptured several neighborhoods in the city, which is deemed the main Daesh stronghold in Iraq.