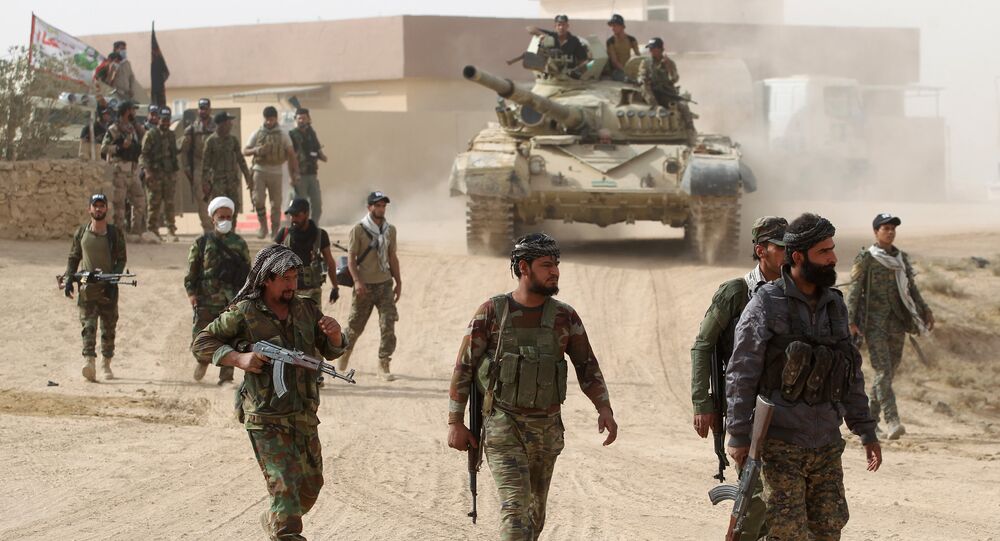 After liberating scores of villages from Daesh in northern Iraq, the Iraqi state-sponsored People's Mobilization Forces are set to take the strategically important town of Tal Afar, some 70km from Mosul, a commander told Sputnik.

Al-Nuri is a member of the committee heading Iraq's state-sponsored People's Mobilization Forces (PMF). The PMF is the umbrella organization for a number of militia groups who are assisting the Iraqi army in its battle to liberate the northern Iraqi city of Mosul from the Daesh terrorist group.

The commander said that tens of Daesh terrorists were killed during the offensive close to the town of Tal Afar, which is some 70km from Mosul.

The PMF is now preparing for an assault on Daesh terrorists in Tal Afar, and has almost complete control over the airport there. The liberation of Tal Afar would be a big blow for the terror group, cutting off a crucial supply route to Mosul.

© AP Photo / Hussein Malla
'The First Line of Defense': Peshmerga to Stay in Iraq's Liberated Areas
"The liberation of the airport in Tal-Afar will destroy the connection of the terrorists who have occupied the city, with Mosul," PMF spokesman Akhmed Al-Asadi said.

"The liberation of Tal-Afar will be a great contribution in the battle for Mosul, because freeing this town and its suburbs will stop one of the last major means of financing and arming Daesh insurgents in Mosul."

Last month the Iraqi army, supported by the PMF, Kurdish Pershmerga fighters and some special forces from the US, Turkey and other countries, began its offensive to take back Mosul from the Daesh terror group, which took control of Iraq's second largest city in 2014.

On Thursday, one month since the start of the offensive, the Iraqi army reported the liberation of the village of Omarkan, which is close to the ancient city of Nimrud, some 30km to the north of Mosul.