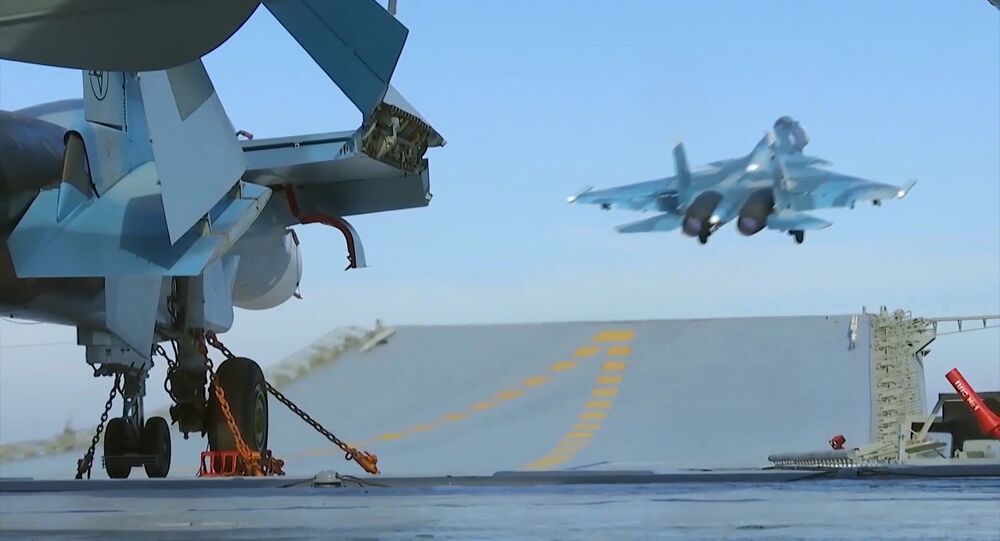 Coalition 'Building Image' in Syria, Turning It Into Competition With Russia

Commenting on the ongoing Syrian conflict, Syrian journalist Abbas Djuma told Radio Sputnik that the West has turned it into a competition with Russia and is "building its image" rather than fighting against terrorists.

© Photo : Ministry of defence of the Russian Federation
Russian Carrier-Based Su-33 Jets Eliminate Dozens of Al-Nusra Front Terrorists in Syria
Commenting on the ongoing Syrian conflict, Syrian journalist and expert in the Middle East Abbas Djuma told Radio Sputnik that the West has turned it into a competition with Russia, while the US-led coalition does not undertake any actions to really fight against terrorists.

"There is no way to bring terrorists to their senses, frighten them or appeal to their conscience, they can be only eliminated," he told Sputnik.

However the purpose of the US-led coalition is not to eliminate terrorism, he said. It pursues a so-called "image-building" aim to demonstrate that Russia is doing nothing while they are responsible for every success.

"Russia has accepted the rules of the game and has already set the level of the game. Let's see whether the US is able to match it," Abbas Djuma noted.

He further elaborated that by the "level of the game" he understands the recent successful airstrikes on Daesh militants in Syria launched from Russia's Admiral Kuznetsov aircraft carrier on Tuesday.

© Sputnik / Oleg Lastochkin
Watch Russian Tu-95 Bombers Target Daesh, Al Nusra in Syria (VIDEO)
At least 30 militants from the Jabhat Fatah al Sham including a commander who had planned an offensive in Aleppo, were eliminated as a result of airstrikes launched from the Admiral Kuznetsov aircraft carrier on Tuesday, Maj. Gen. Igor Konashenkov, spokesperson of the Russian Defense Ministry told journalists.

Commenting on the airstrike, the Syrian journalist called it just a "warm-up" before more serious actions.

"This is just a warm-up, it is only the beginning," he told Sputnik.

Anything of the kind is seldom, if ever, demonstrated by the Western coalition which has been flying and bombing Daesh for more than a year already, he said.