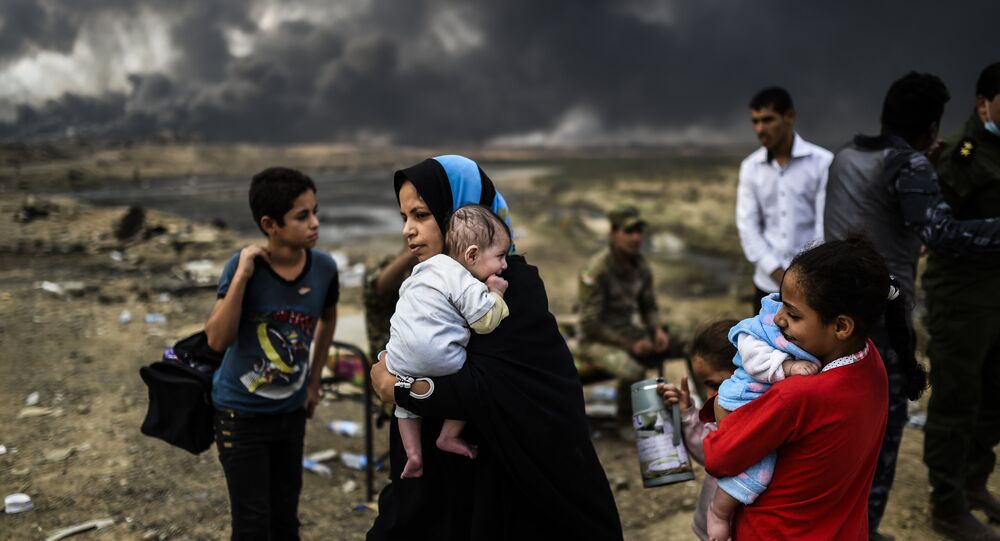 Iraqi security forces liberated two areas from Daesh, fighting to the east of the country's northern city of Mosul occupied by the terrorists. As the operation continues, many more civilians are getting a chance to escape the clutches of jihadists. Sputnik Turkey spoke with two survivors who ran away from Mosul.

© REUTERS / Stringer
Iraqi Army Finds Underground Prison With Over 950 Captives of Daesh in Mosul
Muhammd İssa and Kewser Eli told correspondent of Sputnik Turkey, about their harrowing escape from Mosul under gun fire and airstrikes.

Mohammad Issa, a 38-year-old civilians said, “We are from Elires, east of Mosul. In our neighborhood there were many Shabak Kurds and Arabs residing. The Iraqi Army launched an operation to liberate our area from Daesh. For four days, there was a fierce fighting there were bombs and rockets flying all the time.”

He further said that as a rule, the jihadists carried out attacks in the night and the Iraqi Army during the day.

“Due to constant clashes, we did not leave the house at all. Daesh used civilians as human shields; they did not let us get away from the city. They wanted us to stay in the city and fight against the Iraqi Army,” Issa said.

Recalling his escape, Issa said that he got a chance to run when Daesh lost control over a few positions in the area.

“When we fled, the jihadists opened fire on us. In total we were about 200 people. As a result of the firing, 6 people died and 12 were injured.”

Kewser Eli, 73, said that Daesh militants did not allow anyone to leave and whoever tried to flee was gunned down.

© Sputnik / HİKMET DURGUN
Children in Mosul 'Coming With Gunshots, Burns, Scrapes, Shrapnel Wounds'
To prevent people from leaving in their cars, militants punctured their tires. According to Eli, “Daesh told us that if there was a civilian population in the city, it will not be attacked. Therefore, we had to stay there.”

Recalling the moment of escape, Eli said “there was total panic. Everyone was very scared.”

“When the airplanes launched air strikes on the places where we were being attacked, the attacks stopped and we managed to escape. Frankly, we did not even dream of escaping unharmed, because at any moment a mine or artillery shell could explode on our heads,” Eli said.

Mosul has been occupied by Daesh, which is outlawed in Russia and the United States among other nations, since 2014.

On October 17, Iraqi Prime Minister Haider Abadi launched the operation to retake the city. The operation began with 4,000 Kurdish Peshmerga fighters and 30,000 Iraqi soldiers backed by the US-led anti-terror coalition.