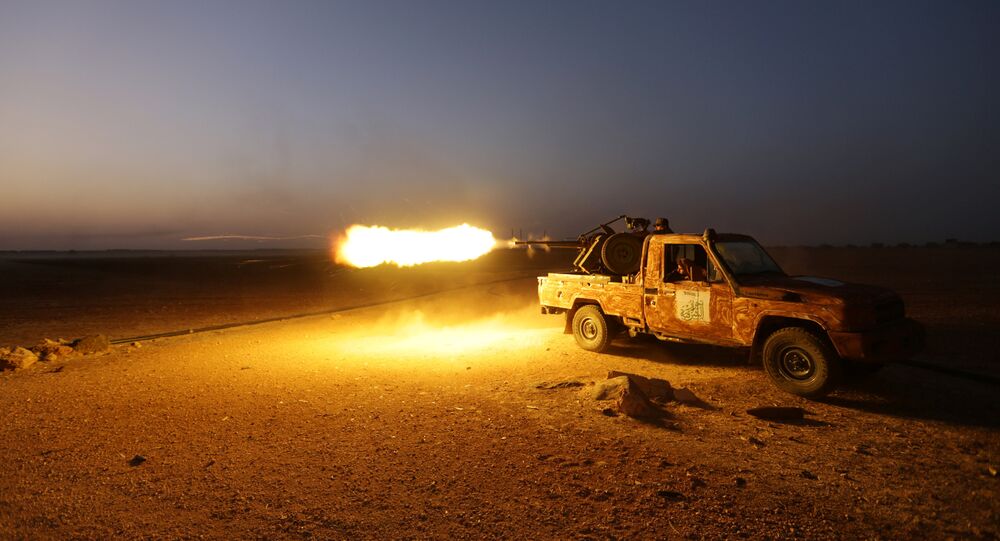 Policymakers in the United States want Aleppo to remain a battlefield in a bid to use the Syrian Arab Army's operation to liberate the second largest city in the country as an opportunity to criticize Damascus and its allies, particularly Moscow, Syrian political analyst Salim Ali told Radio Sputnik.

The expert's comments came after the International Committee of the Red Cross (ICRC) decided not to carry out a medical evacuation in eastern Aleppo due to security concerns.

The ICRC "received security guarantees from Russia and the Syrian government as opposed to terrorists and 'moderate' opposition backed by the United States. I think this question should be directed to Washington. They are the key sponsor of armed groups. This is why it is the US that has to provide security guarantees" to aid workers, the analyst said.

In Salim Ali's opinion, Washington has other plans for Syria, including Aleppo, in mind.

Policymakers in the United States "want bloodshed in Aleppo to continue for public relations purposes, namely to criticize Russian and Syrian authorities," he said. "In other words, such statements are meant to generate publicity."

Salim Ali criticized the ICRC for paying particular attention to Aleppo, while commenting less on the situation in Mosul, Deir ez-Zor and Raqqa.

© AFP 2020 / GEORGES OURFALIAN
Syrian Rebels Are 'Desperate': Damascus-Led Forces Set to Free Aleppo 'in the Near Future'
Iraqi security forces and their allies, including the US-led coalition and Kurdish fighters, have been engaged in a major operation aimed at liberating Mosul, Daesh's stronghold in Iraq. The second largest city in the country is home to approximately 1.5 million people, with many worried that the offensive could lead to massive civilian casualties.

The Russian Defense Ministry has provided information on several airstrikes launched by the US-led coalition which have claimed scores of civilian lives during the battle for Mosul. Russian Foreign Ministry spokeswoman Maria Zakharova called the operation a "medieval slaughter, which primarily affects the civilian population."

© Sputnik / Mikhail Voskresenskiy
Bazaars, Café, Music: Aleppo Citizens’ Everyday Life Amid Terror Attacks (PHOTO)
The same is true of Raqqa with its population of 200,000. The Pentagon has launched an operation to free the so-called capital of Daesh's caliphate. The first phase of the offensive will see Kurdish-led Syrian Democratic Forces encircle and isolate the city. This tactic will likely have major humanitarian implications since the brutal group has not shied away from using civilians as human shields.

"I have not heard that the ICRC made any statements on Mosul, Dier ez-Zor and Raqqa. There are more civilians there than in eastern Aleppo. But the ICRC keeps silent. If they were thinking about people, they would have mentioned all the cities instead of talking about the one where Russia does not coordinate its activities with the United States," he lamented.

The Syrian analyst further said that the ICRC was capable of conducting a medical evacuation in Aleppo, but opted out of it.

© REUTERS / Ammar Abdullah
Syrian Army Fighting to Liberate Last Stronghold of Rebels in Western Aleppo
"Humanitarian corridors were open for many days. There was an opportunity to deliver medical aid, but only on the condition that all deliveries would be inspected. This is necessary since there was a case of someone trying to smuggle weapons and ammunition disguised as humanitarian aid. This is why all medical supplies should be checked, but they don't want this to happen," he explained.

Earlier, Robert Mardini, the ICRC's regional director for the Middle East, told Sputnik that armed groups in eastern Aleppo did not provide security guarantees needed to carry out a medical evacuation from the area. The organization had planned to transport 200 critically injured and their families out of the rebel-held neighborhoods. This figure was later lowered to ten people, but the evacuation did not take place at all.